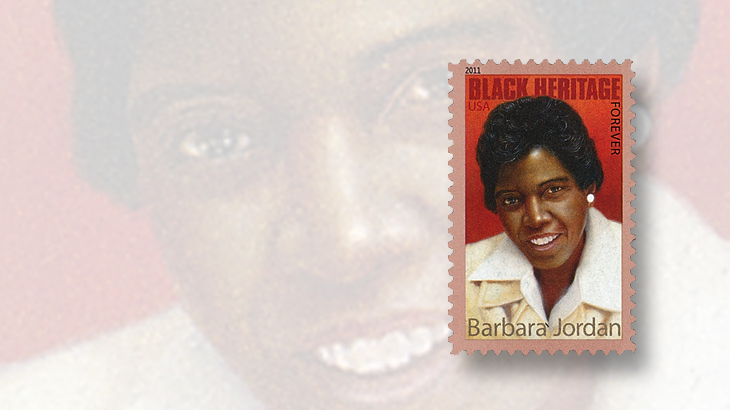 Barbara Charline Jordan was born in Houston on Feb. 21, 1936, to Benjamin M. Jordan, a Baptist pastor, and Arlyne Patten Jordan.

On the liner behind each of the United States forever stamps issued to honor her in 2011 is printed: “Barbara Jordan (1936-1996) was one of the most respected and influential American politicians of the 20th century. She captured the attention and admiration of the nation with her intelligence and integrity, eloquent oratory, ardent defense of the Constitution, and staunch advocacy of equal rights for all American citizens.”

The stamp (Scott 4565) is part of the Black Heritage commemorative series.

Jordan returned to Texas to begin her own law practice and became involved in the political system as a campaigner for John F. Kennedy in the U.S. presidential race of 1960. She was elected to the Texas state senate as a Democrat in 1966, the first African-American member of the Texas senate since 1883.

Jordan would become the first black congresswoman from the South in 1973 when she won election to the U.S. House of Representatives.

She rose to prominence as an effective public speaker and a member of the House Judiciary Committee during the Richard Nixon impeachment hearings.

During her years in political office, Jordan sought to strengthen civil rights protections through her support of an expansion of the Voting Rights Act and legislation involving labor issues, bank lending practices, and women’s rights.

She retired from politics after three terms in Congress, though she would teach public service themes at the University of Texas, serve as an adviser to political leaders, and give the keynote address for the second time at the Democratic National Convention in 1992. She had first addressed the convention in 1976.

President Bill Clinton awarded her the Presidential Medal of Freedom in 1994, stating, “She continues her life’s work as teacher, explaining and analyzing complex issues of moral responsibility in politics and imbuing the leaders of tomorrow with the ability to follow her formidable lead.”

In her later years, Jordan suffered from multiple sclerosis and leukemia. She died Jan. 17, 1996, after contracting pneumonia, just one month before her 60th birthday.