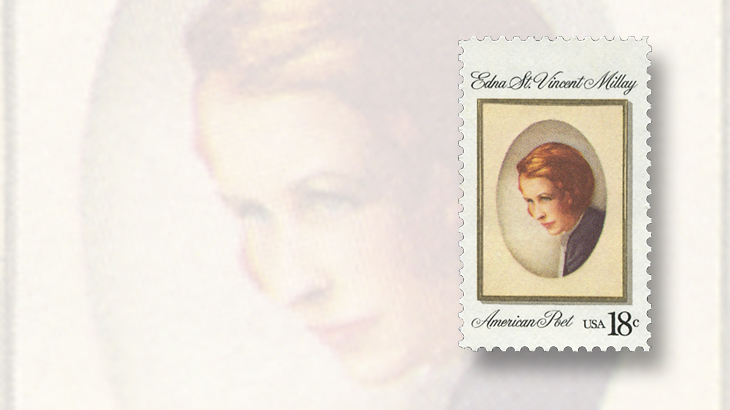 Edna St. Vincent Millay was honored on an 18¢ stamp in the American Poet series in 1981.

Millay “began writing verses as a child and gained attention as a young adult by voicing the spirit of rebellion and emancipation that marked the 1920s,” according to the United States Postal Service.

She attended Vassar College in New York’s Hudson Valley and found acclaim when her long poem Renascence was admired as part of a poetry competition. After graduating from college in 1913, Millay moved to New York City and continued to write poetry, plays, and magazine articles.

She won the 1923 Pulitzer Prize for poetry, the first woman to do so, for her poetry collection, The Ballad of the Harp-Weaver: A Few Figs from Thistles: Eight Sonnets in American Poetry, 1922, A Miscellany.

She completed the libretto for the opera The King’s Henchman in 1927, and continued to write. She became quite famous and was recognized both as an accomplished poet and as a voice for feminism and political activism.