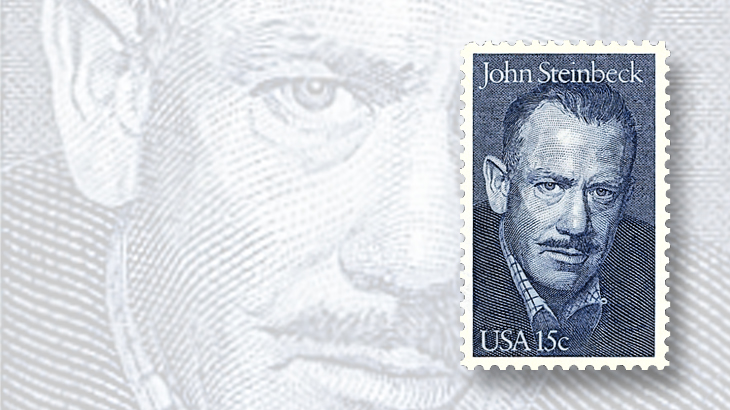 Author John Steinbeck was featured on a 15¢ stamp in the Literary Arts series in 1979.

John Ernst Steinbeck, Jr., was born Feb. 27, 1902, in Salinas, Calif. His father was a flour mill manager, and his mother was a former schoolteacher.

Steinbeck enjoyed reading as a child and developed an interest in writing. He enrolled at Stanford University in 1919 and took writing courses, but did not complete his degree.

After living briefly in New York City, Steinbeck returned to California, married his first wife, and finished his first novel, Cup of Gold, in 1929.

Other novels and short stories followed before his first great success, Tortilla Flat, which was published in 1935 and turned into a movie in 1942.

Around the same time, Steinbeck completed Of Mice and Men and Grapes of Wrath, before serving as a war correspondent during World War II.

In 1962, Steinbeck won the Nobel Prize for literature, and in 1968 President Lyndon Johnson awarded him the Presidential Medal of Freedom.

Steinbeck died Dec. 20, 1968. Twice divorced, he had two sons with his second wife, Gwyn Conger. At the time of his death, he had been married to his third wife, Elaine, for 18 years.

A 15¢ commemorative honoring John Steinbeck was issued Feb. 27, 1979, in the Literary Arts series.