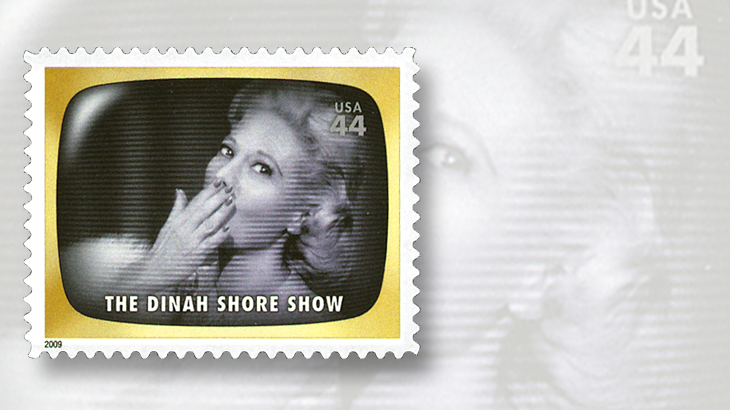 Dinah Shore was commemorated on a 44¢ stamp in 2009 in honor of her early television success.

American entertainer Dinah Shore was born 100 years ago today, on Feb. 29, 1916, in Winchester, Tenn. Her name at birth was Frances Rose Shore, and she took on the first name Dinah because she was closely associated with the popular song Dinah after she started out as a singer in the 1930s.

She performed extensively on radio in the 1940s and had a hit with her first recording, the Jack Lawrence song Yes, My Darling Daughter.

Shore had a successful recording career for many years, but her most familiar tune might be the advertising jingle See the USA in your Chevrolet, which she often sang on her own television talk and variety program, The Dinah Shore Show, beginning in 1951.

With her effervescent personality and scores of show business friends, Shore continued in her television role into the 1990s with her regular series, specials, and guest appearances.

Because of her pioneering television program, Dinah Shore is pictured on a 44¢ stamp in the 2009 Early TV Memories set (Scott 4414i).