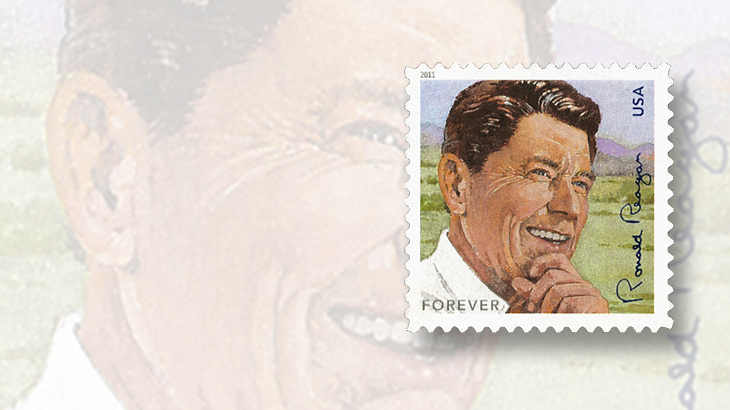 Ronald Wilson Reagan was born Feb. 6, 1911, in Tampico, Ill. When he was still a child, his family settled in Dixon, some 30 miles away in northern Illinois.

Reagan graduated from Dixon High School and attended Eureka College, majoring in economics, and showing an interest in performing arts and sports. He was elected student body president and graduated in 1932.

Soon after graduation, Reagan was hired as a radio sports announcer in Davenport, Iowa. That led to a screen test with Warner Bros. in California, and Reagan was signed to a film contract. He married actress Jane Wyman in 1940, and they had two children: daughter Maureen and an adopted son, Michael. Another daughter, born prematurely, died after one day. The couple divorced in 1948.

During World War II, Reagan was disqualified from overseas service because of his eyesight, but he served in the Army in California. In a successful film career that spanned almost 30 years, Reagan appeared in dozens of movies, including featured roles in Knute Rockne All American (1940), King’s Row (1942), and Hellcats of the Navy (1957), in which he costarred with Nancy Davis, whom he had married five years earlier. The Reagans had two children, Patricia and Ronald.

Initially a Democrat, Reagan was elected president of the Screen Actors Guild in 1947 and served several terms in that office. During those years, he campaigned for Republican political candidates, and declared his shift to the Republican Party in 1962. In 1966, he successfully ran for governor of California and served two four-year terms.

He was the Republican nominee for president in the election of 1980, and defeated the incumbent, Democrat Jimmy Carter. Just two months after his inauguration, Reagan was shot in the chest in an assassination attempt. Though seriously injured, he recovered quickly and returned to work.

At the beginning of the two terms of his presidency, Reagan sought to cut income taxes and increase American military strength. After a recession struck the U.S. economy in 1981, Reagan signed a major tax increase into law the following year.

After his presidency, Reagan retired to his California ranch. In 1994, he publicly revealed that he was suffering from Alzheimer’s disease. He died June 5, 2004.