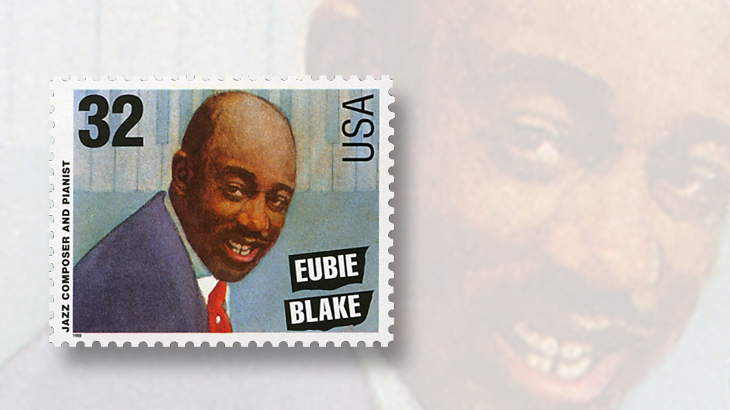 Musician and composer Eubie Blake, on a 32¢ American Music series stamp issued in 1995.

He was introduced to music at a young age, first playing a pump organ at home, and then performing on piano professionally. He met composer Noble Sissle in 1915, and the two collaborated on the musical Shuffle Along, which premiered in 1921 and included the popular songs I’m Just Wild About Harry and Love Will Find a Way.

Blake played ragtime and jazz along with popular music, and continued to contribute to Broadway musicals for many years, including Lew Leslie’s Blackbirds of 1930. During World War II, he entertained the troops at USO shows.

Blake continued to perform and compose, and he enjoyed a revival in popularity in the 1970s when ragtime music returned to the public’s attention. A 1979 Broadway musical revue starring Gregory Hines, Eubie, featured many of his most popular songs.

Blake was presented with the Presidential Medal of Freedom in 1981 by President Ronald Reagan.