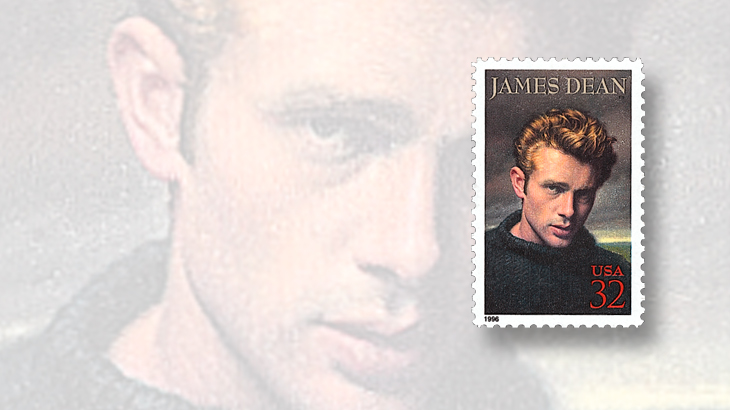 Actor James Dean was honored on a 32¢ stamp in the Legends of Hollywood commemorative series.

The Legends of Hollywood commemorative stamp series, which began in 1995 with a 32¢ stamp honoring Marilyn Monroe (Scott 2967), continued the following year with a 32¢ stamp for actor James Dean (3082).

“In a brief but brilliant career, the actor James Dean (1931-1955) spoke for millions of American teenagers as the misunderstood youth in East of Eden and Rebel Without a Cause. His stature grew mythic after he died in a car crash, shortly before his final film, Giant, was completed.”

Dean grew up in Indiana, but as a child he lived for a few years in California. After graduating from high school, he returned to California and found work in television commercials, TV productions and films, and studied at the Actors Studio.

Dean’s first leading role was as Cal Trask in East of Eden in 1955, earning him an Academy Award nomination. His two films after that were released following his death on Sept. 30, 1955, with Dean in a lead role in Rebel Without A Cause, and in a supporting role in Giant, which brought him a second Oscar nomination.