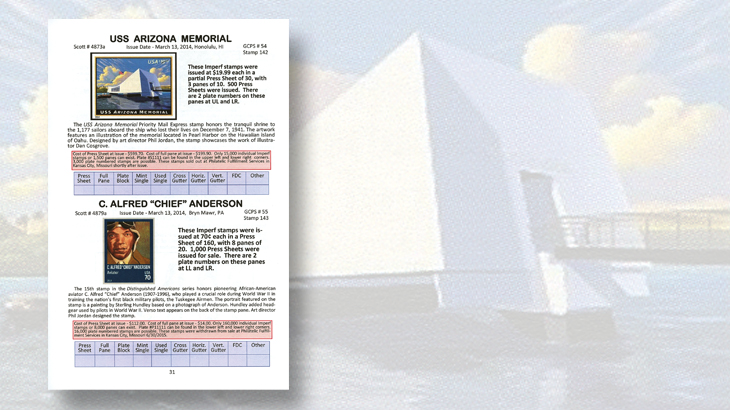 ‘A Guidebook and Checklist — U.S. Postal Service No-Die-Cut Stamps 2012 to 2015,’ published in December 2015, brings together all the pertinent information about imperforate stamps from uncut press sheets without die cuts. These stamps, now listed in the

In 2012, the United States Postal Service began selling uncut press sheets of selected commemorative and definitive stamps that had no die cuts between the stamps.

Imperforate stamps from these press sheets were initially footnoted (along with values) in the Scott Specialized Catalogue of United States Stamps and Covers.

Scott numbers were not assigned to these stamps at the time because the Scott editors did not feel that they satisfied certain criteria of the Scott catalog listing policy.

As time marched on, however, the popularity of the without-die-cuts stamps grew. Some of the imperforate press sheets sold out not long after they were put on sale.

Retail prices for single stamps and multiples suggested that most of the imperforate press sheets were produced in sufficient quantities to meet collector demand.

For these and other reasons, the Scott editors changed course and decided to assign catalog numbers to the stamps as minor varieties of the stamps with die cuts.

These new numbers first appeared in the 2016 Scott U.S. Specialized catalog, which was published in October 2015.

Co-authored by Jill R. Ambrose and James A. Siekermann, this handy reference work provides the pertinent details for the no-die-cut stamps issued through Oct. 1, 2015, the first day of issue of the A Charlie Brown Christmas stamps (Scott 5030d, imperforate double-sided pane of 20).

In separate introductions, Ambrose provides “a little bit of background history” and “personal observations” about no-die-cut stamps, while Siekermann touts the challenges and fun associated with trying to assemble a complete collection of the stamps.

According to Siekermann, he and Ambrose “have been working on this project for two and a half years now, and [the guide] is the culmination of that work.”

An index to the stamps follows, arranged chronologically according to date of issue. Scott numbers also are provided, and listings marked with an “x” were still available from the Postal Service as of Dec. 8, 2015.

Unfortunately, the authors missed adding the “x” designation to some no-die-cut issues that are still available from the Postal Service.

A quick check of the usps.com website Feb. 9 revealed that imperforate press sheets of both the Evergreen Wreath global forever stamp and the U.S. Coast Guard forever stamp are in stock.

Further complicating the situation going forward is that some issues marked as still available from the Postal Service will sell out in time, thus diminishing the usefulness of the index.

Perhaps it would have been better to not draw attention to the availability of the press sheets at the time of publication.

This mild shortcoming in no way diminishes the usefulness of the guide.

For each issue, Ambrose and Siekermann present a detailed review that includes the issue title, date and location of the official first-day ceremony, Scott catalog number(s), configuration and cost of the press sheet, and the numbers of panes and individual stamps available from the issued quantity of the press sheet. A brief summary of the issue subject also is presented.

At the bottom of each listing is a handy checklist that you can use to keep track of which stamps and multiples you have, either mint or used.

Listings for the $19.99 USS Arizona Memorial and 70¢ C. Alfred “Chief” Anderson stamps are shown on the page illustrated nearby.

Following the listings, the authors discuss how to obtain imperforate uncut press sheets and analyze the current market: “The serious observer will note that the prices continue to rise, that there are very few used stamps being offered, that there are hardly any first day covers available, and that even the common material is drying up.”