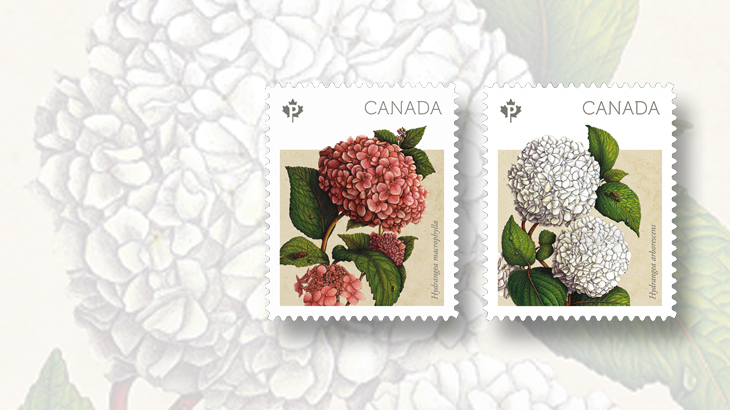 The latest Canada Spring Flowers stamps are pink “Endless Summer” and white “Annabelle” hydrangeas. The stamps are to be issued March 1 in booklets of 10 and coils of 50. 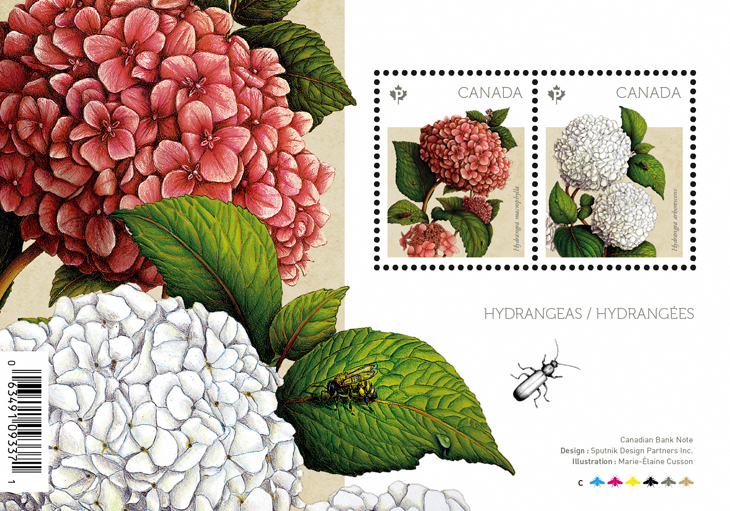 Canada Post’s Hydrangeas souvenir sheet includes both stamps of the issue and enlargements of their floral designs, along with images of pollinators: wasps, beetles, and six honeybee silhouettes showing the colors in which the souvenir sheet was printed.
Previous
Next

One stamp features the handsome pink bloom of the “Endless Summer,” a bigleaf hydrangea (Hydrangea macrophylla) prominent in the southeastern United States.

This species has been cultivated for centuries in its native soil of eastern Asia, producing pink, blue or lavender flowers depending on the pH balance of the soil and its aluminum content.

According to Canada Post, the recent renaissance of interest in hydrangeas is due not only to the beauty and abundance of their massive blossoms, but also to the fact that the plants require little more than moderate moisture and shade in order to flourish.

The two designs alternate in both the die-cut booklet and vertical-format coil roll.

The two-stamp souvenir sheet is perforated and has moisture-activated gum.

Nondenominated ($2.50) international-rate postal cards with the Hydrangea designs will round out Canada’s 2016 Spring Flowers, an annual postal bouquet many collectors have come to cherish as philatelic harbingers of spring.

Issued early each year, Spring Flowers stamps are well-themed and well-timed for use in mailing out wedding and shower invitations.

In the last 10 years, the Spring Flowers have been issued between March 1 and March 13 every year, except 2014. The stamps were issued on April 23 that year.

A listing of popular topics on Canada stamps identifies more than 165 floral designs in the past 54 years, the first being a 1962 5¢ stamp (Scott 399) for the 100th anniversary of British Columbia’s capital Victoria, “the City of Gardens.” But 2016 appears to be the first time that hydrangeas have been singled out for the honor.

Adapted from artwork illustrated by Marie-Elaine Cusson and managed by Susan Gilson of Toronto’s Sputnik Design Partners Inc., the stamps were printed in six-color offset lithography by Canadian Bank Note.

The color registration marks on the souvenir sheet are shaped like honey bees. Yellowjackets (wasps) and longhorn beetles are other important pollinating insects represented on the stamps and souvenir sheet.

Printing quantities for the issue are one million booklet stamps, 90,000 coil stamps, and 120,000 souvenir sheets.

Canada Post will service 10,000 official first-day covers franked with pairs of the Hydrangea booklet stamps with a honeybee postmark from Sunny Corner, New Brunswick. Sunny Corner is a rural settlement of about 700 people on the northeast bank of the Miramichi River that appears to have been chosen for its agreeable name. The booklet stamps FDC is Canada Post item 414007131.