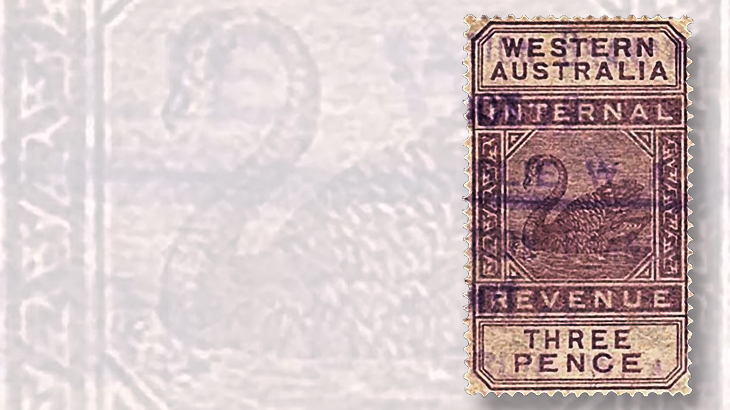 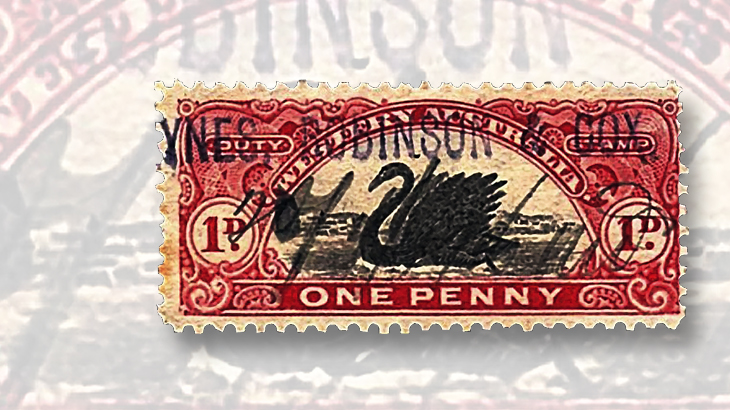 Western Australia used one of its black swan designs on a bicolor engraved 1-penny duty stamp in 1904. 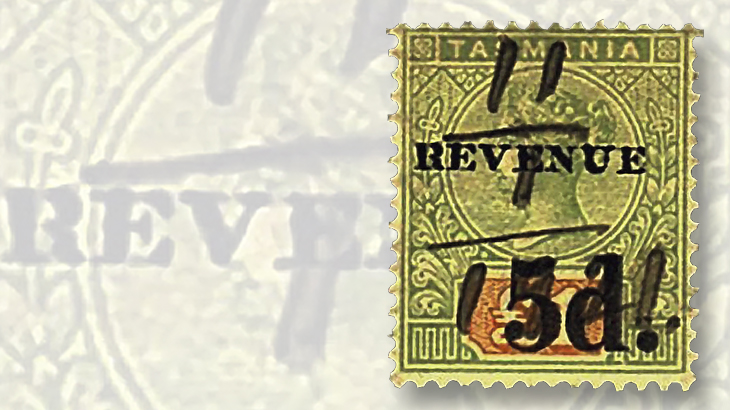 Tasmania overprinted a £1 Queen Victoria postage stamp with the word “revenue” and a surcharge of 5 pence in 1918. 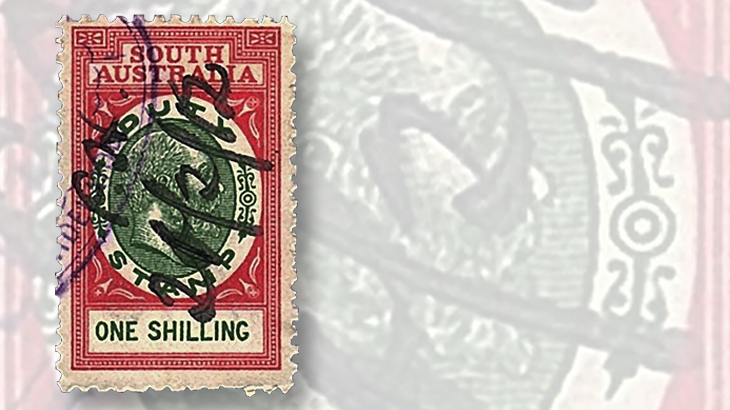 Duty stamps were South Australia’s primary revenue issues. This 1-shilling duty stamp, with a profile of King Edward VII, is from 1904. 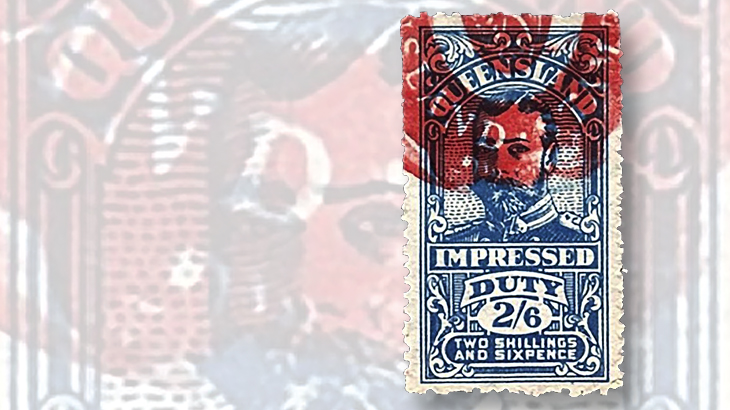 A Queensland impressed duty stamp of 1920. “Impressed” refers to the embossed overprint, used to prevent fraud on stamps paying high revenue on documents. 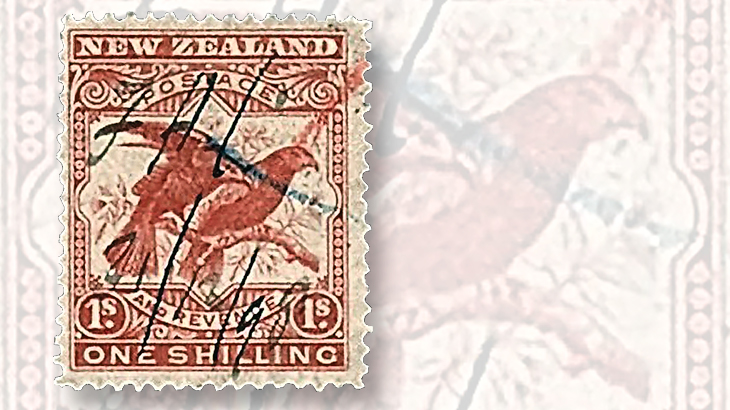 This 1898 New Zealand postage-and-revenue stamp, Scott 81, has a hand cancel typical of revenue use rather than postal use. 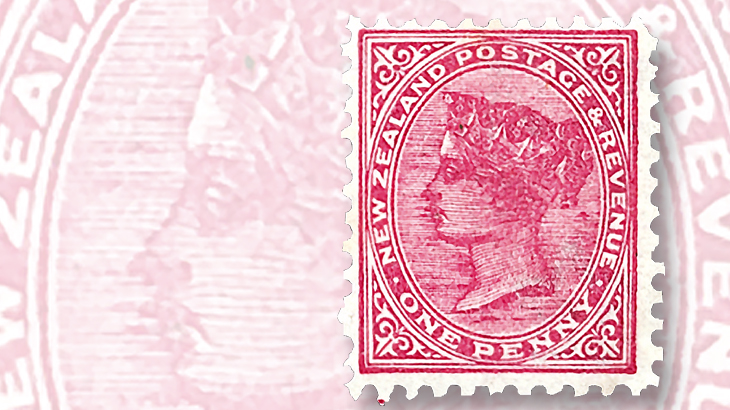 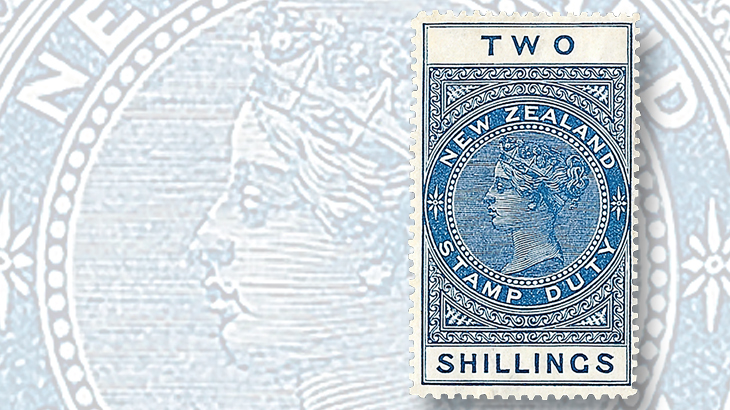 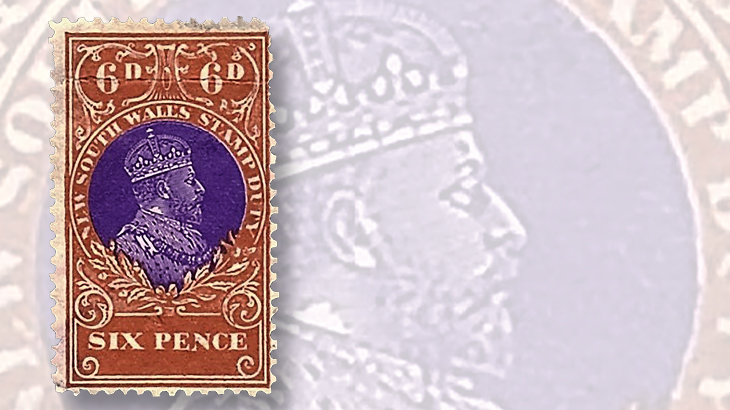 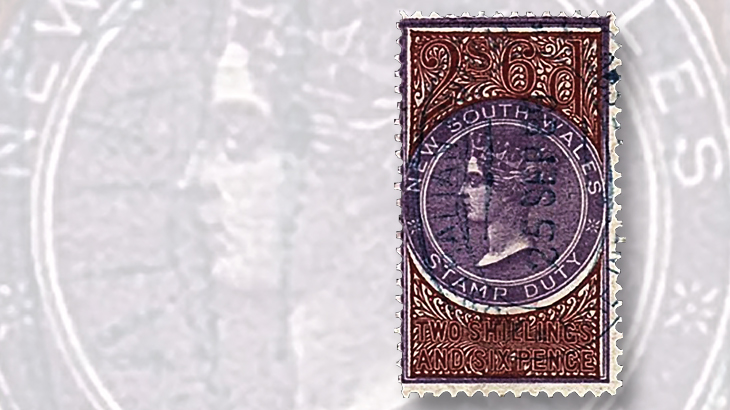 Stamp duty issues such as this one from New South Wales, from 1868-1901, collected taxes on legal documents, marriage licenses, and bank checks, among other official uses. 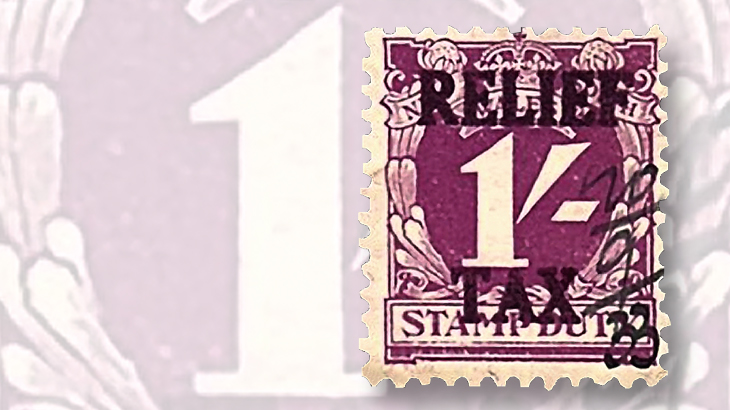 In the Great Depression, this New South Wales 1-shilling stamp of 1930 collected taxes on wages to fund unemployment relief.
Previous
Next

There are stamps that carry the mail, stamps that pay taxes and fees, and stamps that do both. The multitasking postage and revenue stamps issued by many nations made good sense and saved money.

Simultaneously, in 1882, New Zealand used stamps designated as postal-fiscal. These were used primarily for fees on documents, but they also were accepted as postage stamps for mail that required postage in excess of 1 shilling. Shown here is a 2sh postal-fiscal stamp (Scott AR1) issued by New Zealand in 1882.

An example of the 1898 New Zealand 1sh Kea and Kaka Birds stamp shown here has a handwritten cancel typical of most used revenue stamps. Oddly, postage-and-revenue stamps that have been used for revenue purposes generally have less value than postally used stamps.

All of the Australian colonies (New South Wales, Queensland, South Australia, Tasmania, Victoria, and Western Australia) had revenue stamps prepared for a variety of uses.

A large quantity of the colonial revenue stamps in Australia were marked as being for “stamp duty.” These stamps were used to collect taxes on a variety of forms such as marriage licenses, bank checks, and legal documents, to name a few.

A 2sh 6-penny New South Wales stamp duty revenue stamp with the image of Queen Victoria, issued between 1868 and 1901, is shown here, along with another type of New South Wales revenue stamp: a 1sh duty stamp overprinted for use as a relief tax. The stamp was issued in 1930 to collect a tax on wages, in order to support unemployment relief during the Great Depression. In 1933, the relief tax was converted to a wages tax with new revenue stamps.

Queensland had many types of revenue stamps to support a variety of taxes collected on crops, such as bananas and avocados. These can be tricky to find, but worth the search.

As New South Wales did, Queensland issued and used duty stamps in volume.

The Queensland revenue stamp shown is quite interesting, if for no other reason than the inscription that identifies the stamp as “impressed duty.” Yes, the 2sh 6d King George V stamp issued in 1920 is impressive, but that is not what the inscription means.

In this instance, “impressed” means duty stamps used on documents that had taxes of higher value. As a protection against fraud, an embossed stamp was added on top of the adhesive stamp. The red embossing in combination with the blue stamp does make for an impressive presentation.

Duty stamps were South Australia’s primary revenue stamps. The 1sh duty stamp shown here was issued in 1904 and bears a right profile of King Edward VII, with colors of green and red.

Most of the Australia revenue stamps are quite attractive, but Western Australia took good looks to a higher level when, in 1904, the state issued beautifully engraved bicolor duty stamps featuring its longtime emblem, a black swan.

Illustrated here is a 1d Western Australia duty stamp with the swan in the vignette printed in black and the frame printed in red.

Perhaps not quite as pretty as the bicolor black swan issues were other swan stamps issued in 1881 for the internal revenue, such as the 3d lilac stamp with a swan vignette.

Collecting revenue stamps from Down Under (including the Pacific Islands) can be quite a challenge at times, but with persistence you can succeed in acquiring beautiful revenue stamps for very little cost.

The Scott Standard Postage Stamp Catalogue does not list revenue stamps unless they are postal-fiscals.

However, you will find in the Scott standard catalog many images of the duty stamps from Victoria, Western Australia, Tasmania, and Queensland, because from 1882-1892 these four Australian colonies converted duty stamps to stamps that became postal-fiscal (postage-and-revenue) stamps.

For more information about these issues, one source is the British Commonwealth Revenues catalog by J. Barefoot, Ltd. An updated edition is scheduled to be published later this year.