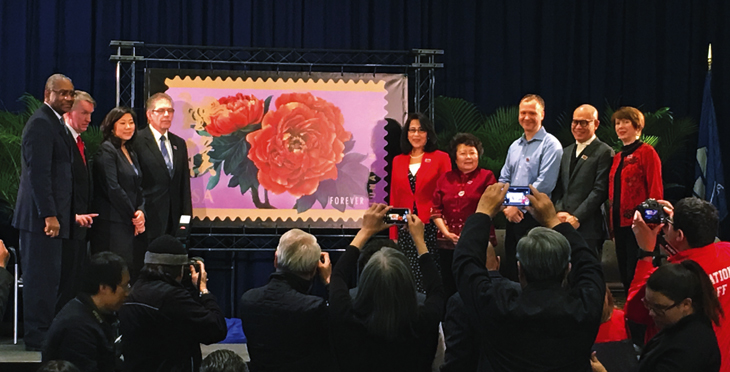 The United States Postal Service’s Year of the Monkey stamp was dedicated by two congressmen, St. John’s University administrative staff, and the stamp’s designer and artist. 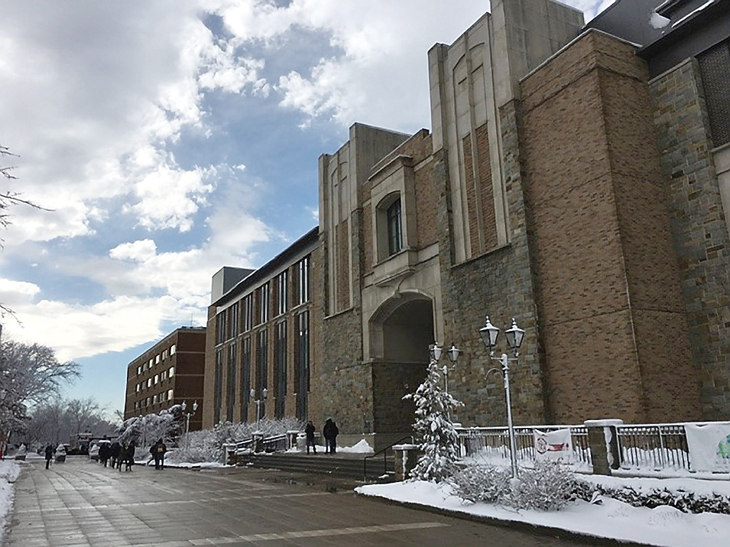 The first-day ceremony for the Year of the Monkey stamp took place on the fourth floor of the D’Angelo Center on St. John’s University’s Queens campus in New York. 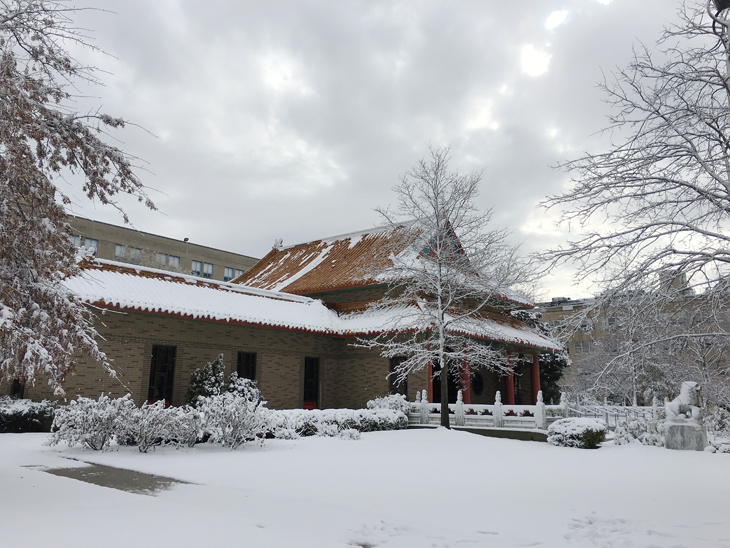 St. John’s University’s Sun Yat Sen Hall, located across the street from the D’Angelo Center, serves as home to the university’s Institute of Asian Studies. 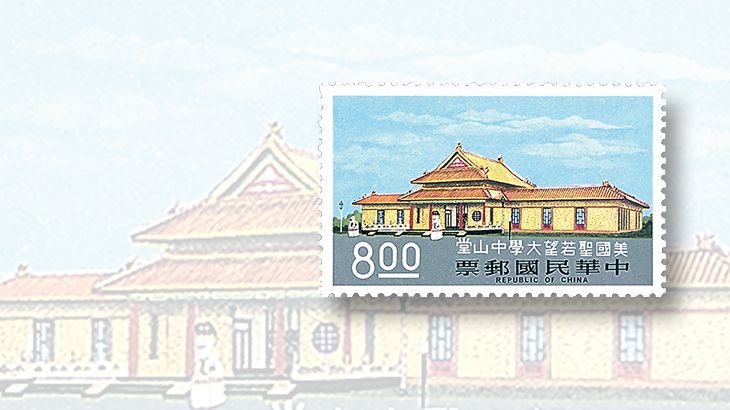 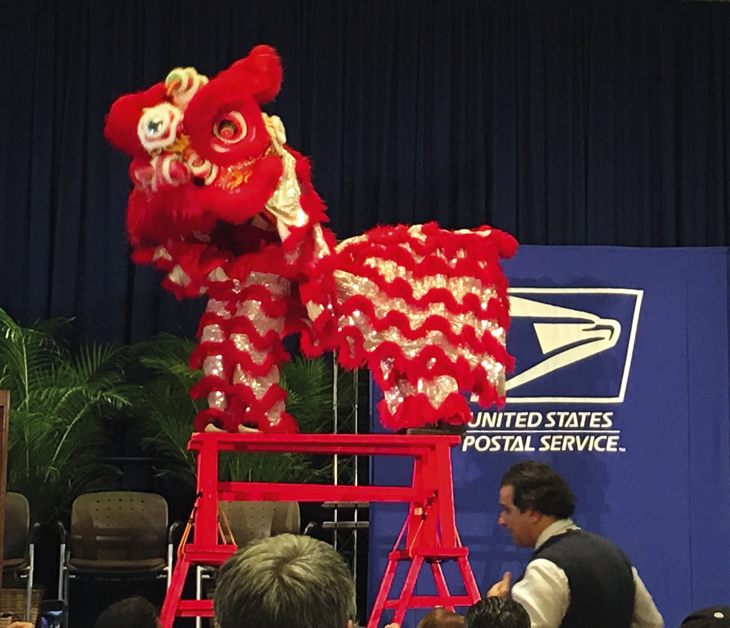 A lion dance was performed at the opening of the Year of the Monkey stamp first-day ceremony. In traditional Chinese culture, the color red scares away bad luck and symbolizes good fortune. 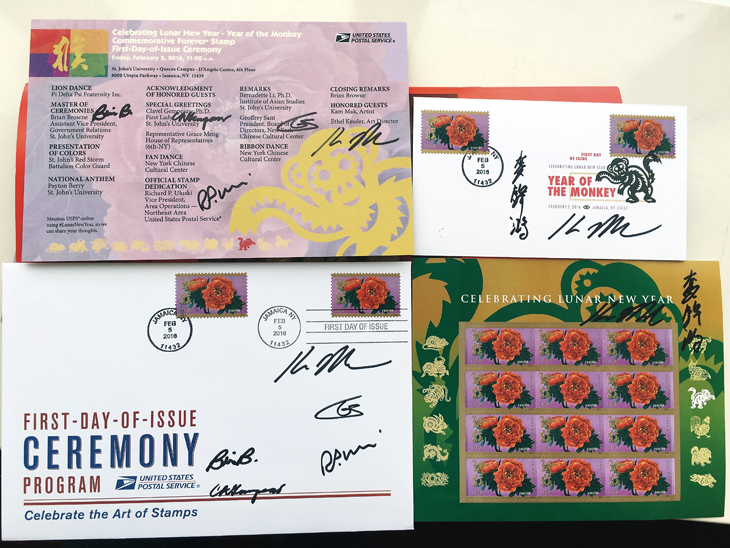 Signed souvenirs from the Year of the Monkey first-day ceremony, including the program, a pane of stamps, and a first-day cover.
Previous
Next

On a snowy morning in early February, I attended the United States Postal Service’s first-day-of-issue ceremony for the Year of the Monkey stamp in Queens, N.Y.

Because I was born in the Year of Monkey, I was particularly excited to attend this event.

The ceremony took place on the fourth floor of the D’Angelo Center, the student center and focal point of St. John’s University’s Queens Campus. The event hall can seat 200 and was almost full by 11 a.m. Friday, Feb. 5, when the ceremony started.

Many of the attendees were students and faculty from the university. Also attending were Asian-Americans who live in the New York metropolitan area.

St. John’s University has a long history with Chinese culture because its Institute for Asian Studies is famous worldwide.

The university is featured on a stamp issued by Taiwan in 1975 (Scott 1933). This 8-fen stamp picturing Sun Yat Sen Hall, home of the Institute for Asian Studies, is part of a set of four commemorating Sun Yat-sen.

The U.S. Postal Service choreographed a wonderful ceremony program. It opened with a series of lion, ribbon, and fan dances, as well as the national anthem, all by students of St John’s University.

The dedications and remarks made by the university’s administrative guests were warm and welcoming. The programs were meaningful, and it was a great cultural exchange bringing people together through the appreciation of the Lunar New Year celebrations.

To my surprise, the stamp’s dedication honored not one, but two U.S. congressional representatives from Queens. I was especially delighted to hear congresswoman Grace Meng (D-N.Y.) speak, because she is the first Asian-American to represent New York in Congress.

In her speech, Meng mentioned she is working on a proposal for the USPS to issue stamps commemorating the 150th anniversary of the 1869 transcontinental railway featuring Chinese immigrant workers.

Immediately after the ceremony dedication and cultural programs, the line to obtain autographs from the ceremony guests was quickly formed.

I was among those people in line, and I obtained five of the guests’ signatures at the table.

Because many of the ceremony attendees were affiliates of the university, I did not notice too many stamp enthusiasts at the ceremony compared with other first-day events I have attended. (See my article “What to look for and what to expect at a USPS first-day ceremony,” published in the July 13, 2015, issue of Linn’s Stamp News).

One of the benefits of a less-crowded first-day event is that there is no limit as to the number of items that can be autographed.

Also, you have the rare opportunity to interact with the event guests. I was fortunate to talk to all five of the guests who signed my ceremony program.

Stamp artist Kam Mak told me that the peony flowers in his painting were inspired by a Chinese idiom, “Hua Kai Fu Gui,” which means that blooming flowers bring riches and good fortune.

In my opinion, his art bridges Asian and Western cultures.

Mak also told me that he is a professor at the Fashion Institute of Technology, School of Art and Design.

Shortly after I obtained the autographs, the stamp sales counter ran out of the Year of the Monkey stamps. Postal representatives had to wait for replenishments, while more people lined up to purchase the stamps.

Running out of stamps is uncommon at a first-day event, but it showed how popular the new stamp is.

Though the issue date was only three days before the Lunar New Year began on Feb. 8, the stamps will be cherished by Asian-Americans and others, and the warm greetings will be passed on through letters to be mailed throughout the United States and all over the world.