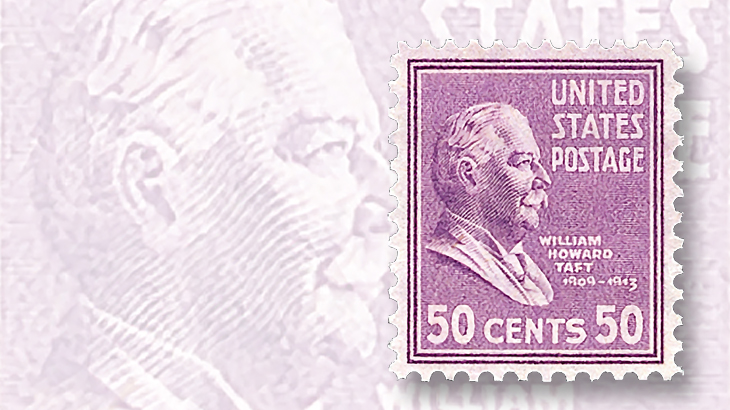 The 50¢ William Howard Taft stamp (Scott 831) from the 1938 Presidential issue honors the only man to serve as both president of the United States and a justice on the Supreme Court.

The only man in the history of the United States to serve both as president and as a justice on the Supreme Court was William Howard Taft (1857-1930).

Taft’s funeral in Washington, D.C., was attended by President Hoover, after which he became the first president of the United States to be interred at Arlington National Cemetery.

The 50¢ stamp in the popular 1938 Presidential series commemorates President Taft (Scott 831). The 2016 Scott Specialized Catalogue of United States Stamps and Covers values the 50¢ Taft stamp at $5.50 in mint never-hinged condition and at $25 as a mint plate-number block of four.

You can probably find a mint single in the $3.50-to-$4 range, and a plate-number block in the $15-to-$20 range. But for a challenge, look for a single-use franking on an airmail cover to Asia. The Scott U.S. Specialized catalog values such a cover at $35, and it would be a very good buy at that price.