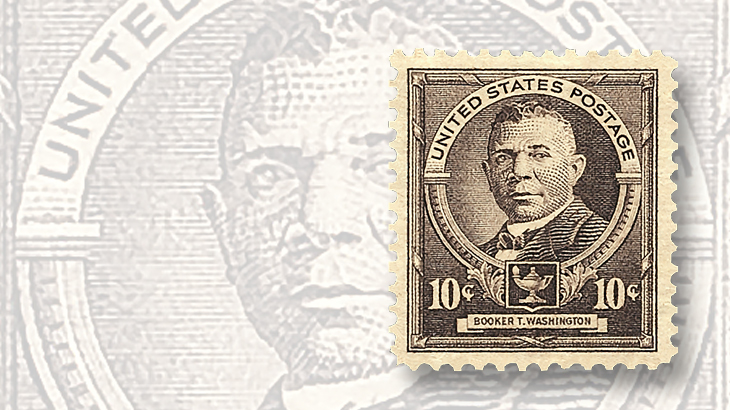 A slightly altered version of this 10¢ stamp from 1940 was featured on the Feb. 1 episode of the game show Jeopardy!

The Feb. 1 episode of the syndicated television game show Jeopardy! featured a United States stamp in one of its questions.

And another U.S. stamp appeared in the Jeopardy! episode broadcast on Monday, Feb. 8.

The Feb. 1 show featured a stamp in its Double Jeopardy segment. Under the category "African-American History," the $800 clue — one of the two special Daily Doubles in the segment — showed the image of a 10¢ brown stamp from 1940, altered to removed the subject's name. Host Alex Trebek read the clue: "This institute founder was the first African-American featured on a U.S. postage stamp."

Contestant Carissa Pekny, who had wagered $1,000 to provide the correct question, took a moment to study the image and incorrectly asked "Who is W.E.B. Du Bois?"

The correct response would have been "Who is Booker T. Washington?" The stamp is United States Scott 873.

Du Bois has, in fact, appeared on two different U.S. stamps, but the first of those was not issued until 1992.

Following the familiar answer-and-question format of the show, the category in the Double Jeopardy segment contained clues about recent United States postage stamps, and three college students competed to respond to each statement with an appropriate question.

The contestants began by selecting clues with the greatest value, so the first stamp clue uncovered had the top value in the category of $2,000.

The clue given was “The portrait of this ‘Invisible Man’ author on a 91-cent stamp is based on a photo by Life Magazine’s Gordon Parks.”

Contestant Niki Peters, representing the University of California-Berkeley, correctly asked “Who is Ralph Ellison?” to claim the $2,000 score.

After jumping around the quiz board to other categories, Peters returned to the Stamps column, requesting the $1,600 clue.

There was silence in the studio as none of the contestants attempted a response.

Later in the segment, the other two contestants each responded correctly to one clue on the board.

Emily Sun, representing Columbia University, responded to the $1,200 clue by correctly identifying the 2013 stamp with the inscription “Henceforward Shall Be Free” as commemorating the Emancipation Proclamation on its 150th anniversary (Scott 4721).

The $800 clue was solved by Stanford University student Gus Woythaler, who correctly noted that the spinning top depicted in yellow on a Hanukkah stamp is a dreidel, an apparent reference to the 2011 Hanukkah stamp (Scott 4583).

The first clue in the category, with a value of $400, was never revealed, as time ran out in the game before any of the contestants called for it.

The Spoonbill stamp was the only stamp pictured in the category. Each of the remaining clues were text only.

At the conclusion of the game, Peters correctly answered the final Jeopardy question and wagered enough to win the game, qualifying her for the final two-game College Championship taking place Feb. 11-12.