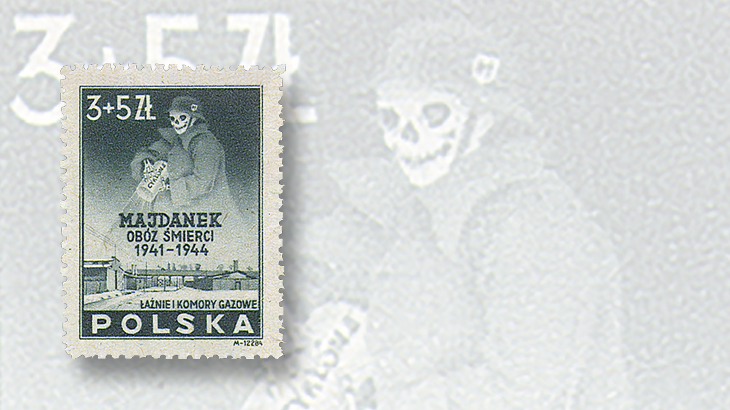 Between 1941 and 1944, 6 million European Jews were systematically murdered by the Nazis and their henchmen.

Many of the Nazi death camps where the Holocaust was carried out were in occupied Poland. There were 3.3 million Jews living in Poland in 1939. More than 3 million of them died in the Holocaust.

On April 29, 1946, Poland issued a 3-zloty+5z Death Spreading Poison Gas over Majdanek Prison Camp semipostal stamp (Scott B45). This stamp remembers the more than 350,000 Jews who were exterminated at this camp during the Holocaust. The macabre and striking design features an allegory of death as a skeleton dressed in a Nazi SS uniform.

Most of the interest is from topical collectors, and most of the demand is for stamps in mint never-hinged condition. Mint blocks of four and larger multiples are also in demand.