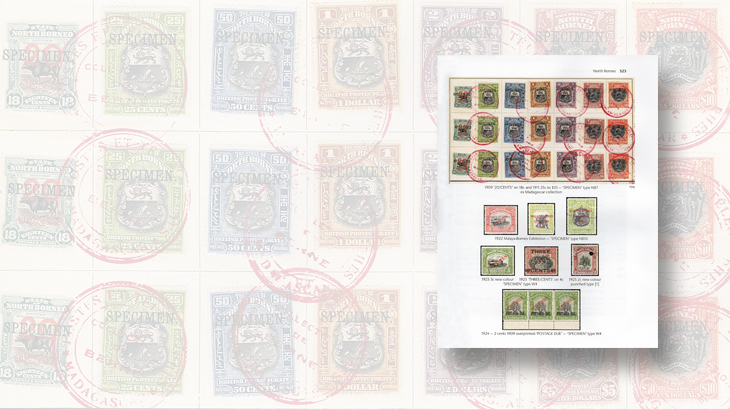 More than 1,800 crisp color illustrations are spread across the 534 pages of James Bendon's 2015 revised edition of UPU Specimen Stamps 1878-1961. This page displays some of the specimen stamps of North Borneo.

When one moves beyond collecting — the filling of album spaces with stamps, for example — and embraces the close study of stamps — their methods of production, how they were used in the mail, and so on — one is called a philatelist.

During the more than 170 years of our hobby’s existence, the names of some of the great philatelists have become indelibly associated with a particular field of study.

In the world of specimen stamps, the name that springs to mind is James Bendon, the widely respected dealer who has made specimen stamps his professional avocation since 1970.

In 1988, Bendon published UPU Specimen Stamps 1878-1961, the essential guide for those who collect and study the stamps or stationery items distributed to the member countries of the Universal Postal Union for identification purposes.

A number of methods were used to mark stamps as specimens. The most familiar of these is an overprint reading “Specimen.” In some cases, specimen stamps were submitted to the International Bureau of the UPU in as-issued condition, without any markings to identify them as such.

As with most (if not all) areas of scholarly endeavor, the advance of knowledge and the reporting of new discoveries continued apace following the appearance of Bendon’s book.

For the better part of the next three decades, Bendon methodically documented new finds, pored over new archival material, and brought more clarity and understanding to the rich fields of specimen-stamp collecting.

All of these efforts came to fruition in late 2015, with the publication of a complete revision of Bendon’s seminal work under the same title.

The meat of the book, about 400 of the 534 pages, is the catalog listing of specimen stamps arranged alphabetically by country. Headings at the top of each page make quick work of finding a particular country.

First is a cogent introduction, followed by crisp color illustrations of the relevant specimen stamps (arranged chronologically by the specimen type).

These are followed by a table providing details about the specimen types.

Finally, a “checklist” summarizes each specimen by issue date (year), description, type, and UPU reference date and number. As Bendon explains in one of the chapters preceding the catalog, the UPU reference “identifies the International Bureau document that covered the items distributed.”

Most of the new book’s more than 1,800 illustrations are in the catalog listings.

Pictured nearby is one page from the catalog, showing some of the specimen stamps of North Borneo.

But before diving into the catalog and feasting your eyes on all those marvelous stamps, I strongly encourage you to spend some time reading Bendon’s preface and the six chapters that precede the catalog.

In the preface, eight key areas of expansion and improvements over the 1988 edition are detailed.

Some of these additions were prompted by recent discoveries, including the dispersal of the UPU specimen archives from the post offices of Goa, Mauritania, and Tunisia.

Chapter 1 provides a brief overview of the Universal Postal Union.

The beginnings of the UPU can be traced to Sept. 15, 1874, when 22 nations gathered in Berne, Switzerland, to draft a universal postal treaty.

On Oct. 9, 1874, the General Postal Union was founded. The GPU changed its name to the Universal Postal Union May 18, 1878, during the second gathering of member nations.

Bendon defines what a specimen stamp is and discusses the classifications of specimen stamps in the second chapter. He also explains that specimen items that have not been defaced are included in the book’s catalog, “provided always that it can be shown” that they were sent “as a sample to a member of the UPU.”

In chapter 3, Bendon outlines the categories of UPU specimen stamps and the “protective markings” that identify most of them as such. These markings include overprints, handstamps, perforations (“specimen” in a pattern of holes punched through the stamp), and postal markings (such as datestamps).

Distribution and receipt of specimen stamps are discussed in chapters 4 and 5, respectively.

Chapter 6 orients the reader to the information presented in the catalog. Its contents should be read carefully before digging into the listings.

Once you’ve gathered in the pertinent details from the chapters, dip into the catalog listings and start exploring the diversity of, and the fascinating stories behind, specimen stamps.

Of the five appendices that close out the book, be sure to read appendix A, which reproduces what Bendon refers to as the “earliest published information on UPU specimen stamps”: an article authored by Marcus Samuel that was published in eight installments in Stamp Collecting during 1964-65.

This article may properly be seen as the foundation upon which Bendon and other students of specimen stamps have built their work.

In appendix B, you will find a brief table detailing the number of specimen items that each member nation was required to submit to the UPU for distribution.

Following the table is a list of the total number of submitted items from UPU members from Dec. 12, 1878, to Sept. 29, 1961. The peak number of items sent occurred in 1907, when UPU member countries sent a total of 756 stamps and 756 postal stationery items.

Appendices C and D provide alphabetical and chronological lists, respectively, of UPU member countries. Both lists are in French, the official language of the UPU.

The various specimen types used by British printers to mark stamps and stationery are discussed and illustrated in appendix E. This section will no doubt provide welcome relief to collectors and dealers seeking to classify their specimen items.

Last, but by no means least, the book is a pleasure to read. Chris Hulin of Oxford Book Projects did a marvelous job marrying Bendon’s text, tables, and illustrations into an eye-pleasing display.

Perhaps, after reading this far, you’re still sitting on the fence about whether or not to add this splendid volume to your philatelic library.

Let me be clear: This thoroughly revised edition of UPU Specimen Stamps 1878-1961 will be the indispensable reference on this subject for decades to come. Even if specimen stamps are but a small part of your collecting world, you should acquire a copy.

Given the book’s importance and scholarly heft, it is a real bargain at £85 plus shipping. To order, visit Oxford Book Projects.

Bendon invites readers to send comments and suggestions for additions and corrections via his website. New information will be published on the Oxford Book Projects website.