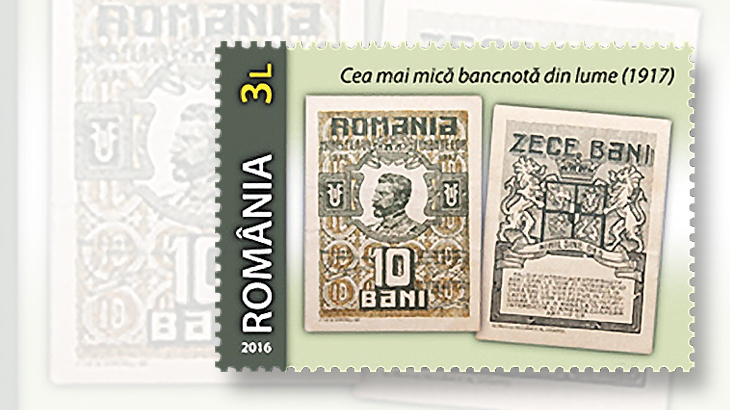 This 3-leu stamp issued Feb. 24 by Romania shows the word’s smallest banknote, according to the World Records Academy. 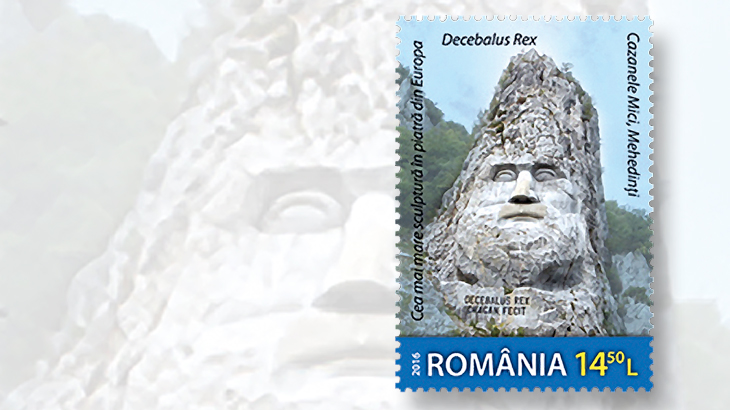 Euruope’s largest stone sculpture, a bas-relief of King Darcia, is featured on the 14.50-leu stamp in the Romanian Curiosities and Superlatives set.
Previous
Next

In announcing the issue, Romfilatelia described the stamps as depicting “examples from areas such as art, coins, crafts and natural heritage, which impress by extraordinary sizes, spectacular shapes and stories … ”

The 3-leu stamp shows the smallest banknote in the world. Measuring 27.5 millimeters by 38mm (1.08 inches by 1.49 inches), the Ministry of Finance of Romania issued this banknote in 1917, during World War I.

Sometimes referred to as the “Romanian Rushmore,” this sculpture of the Romanian national hero Decebalus, the last King of Dacia, is 25 meters wide and 45 meters wide (79 feet by 147 feet).

Located on the banks of Danube in southwestern Romania, the sculpture was built over a decade (1994 to 2004) by a team of a dozen sculptors led by Italian sculptor Mario Galeotti.

The 3.30-leu stamp honors the Gold Museum in Brad, the only gold museum in Europe; and the 5-leu stamp features the largest mechanical organ in Romania. Built in the 19th-century by Carl August Buchholz, the organ of the Black Church in Brasov has 3,993 pipes in 84 rows.