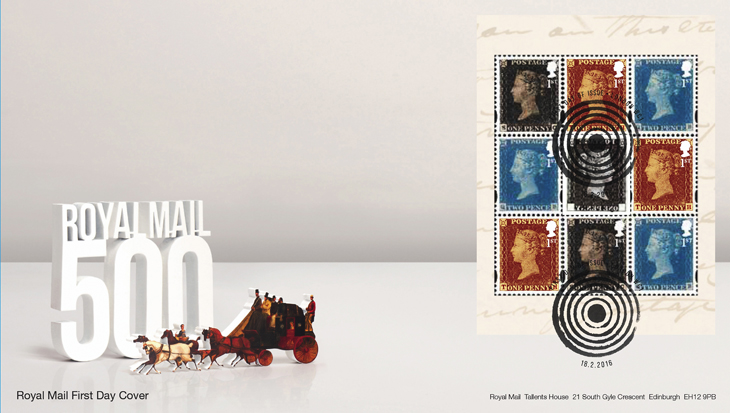 A first-day cover bearing a pane of eight stamps and a label from the Royal Mail 500 prestige booklet. The stamps feature stamp-on-stamp designs of Great Britain’s 1840 and 1841 stamps. 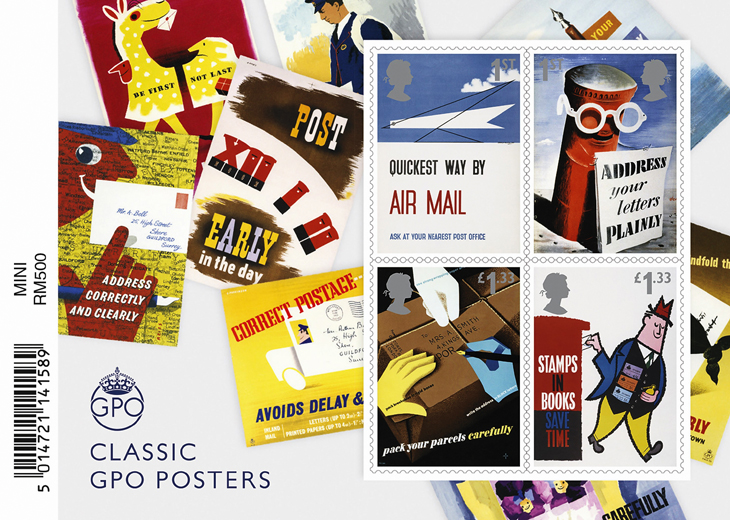 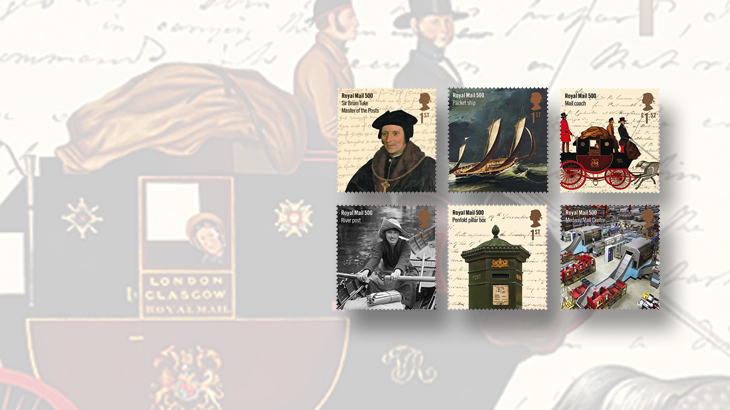 Great Britain’s Royal Mail is celebrating 500 years of regular, organized mail service in 2016, and is issuing 10 stamps Feb. 17 to commemorate developments in its postal service.

A booklet and other items are being released the next day, Feb. 18.

The stamp set is called Royal Mail 500. In the January issue of its publication for collectors, the British Philatelic Bulletin, the set is described as highlighting “significant elements in the story of how our postal network was established and expanded, ensuring the secure movement of mail to establish an efficient communications network across the nation.”

The first stamp in this set honors the knighting of Brian Tuke as the first master of the posts in 1516 and shows a portrait of Tuke painted by Hans Holbein the Younger.

The painting is part of the Andrew Mellon collection of the National Gallery of Arts in Washington, D.C. The gallery said of the painting: “The political strength of Henry VIII’s regime lay in his ability to choose advisors who were both wise and learned. One of these men was Sir Brian Tuke. As Master of the Posts, he organized and established England’s postal service.”

Pictured in the background of this nondenominated first-class stamp is a letter from Tuke to Thomas Cromwell, chief minister to Henry VIII.

Two other stamps in the set also depict letters in the background.

A £1.52 stamp pictures a mail coach in the foreground with a letter from John Palmer about the introduction of mail coaches in Portsmouth in the background.

The Postal Museum, formerly known as the British Postal Museum and Archive, said of Palmer, “John Palmer, a theatre owner from Bath, had organised a rapid carriage service to transport actors and props between theatres and he believed that a similar scheme could improve the postal service. In 1782, Palmer sold his theatre interests, and went to London to lobby The Post Office. Despite resistance from senior Post Office staff, who believed the speed of the mail could not be improved, William Pitt, the Chancellor of the Exchequer, accepted the idea. An experimental mail coach journey, undertaken at Palmer’s expense, started from Bristol on 2 August 1784, at 4 pm. It reached London at 8 am the next day, exactly on schedule. A journey that had taken up to 38 hours now took just 16.”

In 1786, Palmer was named surveyor and comptroller general of the Post Office.

A nondenominated first-class stamp includes a letter from Anthony Trollope in the background and a green pillar box (a freestanding public mailbox) in the foreground.

Trollope (1815-1882), a novelist and postal worker, introduced the pillar box to Great Britain. In the letter, written Dec. 19, 1851, Trollope is proposing the placement of pillar boxes in St. Peter’s Port, Guernsey.

The pillar box pictured on the stamp is called a Penfold, after John Penfold, the architect who designed it.

Two stamps in the set feature mail transportation by water. A nondenominated first-class stamp reproduces the painting Mail Packet off Eastborne by Capt. Victor Howes (1822 -1907). A £1.52 stamp represents the river post and shows a black-and-white photograph of a young woman rowing a river post boat.

From 1800 to 1952, a river postman received and delivered mail to moored ships on a stretch of the River Thames from London Bridge to below Limehouse, according to Royal Mail’s gallery for the 500th anniversary celebration.

During World War I, Doris Beaumont served as the “river post girl.”

Another £1.52 stamp shows the Medway Mail Center, the state-of-the-art mail-processing center that opened in 2012 in Strood.

The six aforementioned stamps were printed by Cartor in sheets of 50 (sold in panes of 25 at most postal outlets). The stamps measure 35 millimeters by 37mm each, and are perforated gauge 14.5 by 14.

Atelier Works designed these six stamps, using images supplied by the Postal Museum and other sources (the National Gallery of Art for the portrait of Tuke, the Imperial War Museums for the photograph by Horace Nicholls of the river post woman, and Getty Images for Peter Macdiarmid’s photograph of the Medway Mail Center).

The other four stamps show General Post Office posters and are se-tenant (side-by-side) in a souvenir sheet. The top two are nondenominated first-class stamps, and the bottom two each bear a denomination of £1.33.

Starting in the upper left of the souvenir sheet, the posters are shown in chronological order.

The first poster, from 1935, features an illustration by Edward McKnight Kauffer promoting the use of airmail. This American-born artist also created posters for the London Underground, and one of these is reproduced on a stamp in the 2011 issue marking the 150th anniversary of this subway system (Scott 3133b).

Shown next in the Royal Mail 500 souvenir sheet is a 1942 poster by Hans Schleger with the message “address your letters plainly.” A poster by Schleger, who worked under the pseudonym Zero, also is included on a stamp in the London Underground issue (Scott 3133c).

The poster urging postal patrons to pack their parcels carefully was created in 1950 by Hans Unger, and Harry Stevens illustrated the 1960 poster that recommends buying stamps in booklets because they save time. Additional posters are shown in the selvage.

The souvenir sheet measures 115mm by 89mm; the stamps measure 27mm by 37mm, and are perforated gauge 14.

A prestige booklet was issued Feb. 18. It includes text and illustrations, in addition to four panes of stamps.

The four stamps from the souvenir sheet are se-tenant on one pane. The other six stamps in the Royal Mail 500 stamp are in two panes, one with the three first-class stamps and the other with the three £1.52 stamps.

The cover of the prestige booklet is designed to look like an envelope franked with a Penny Red stamp.

Royal Mail is commemorating the 175th anniversary of the Penny Red with another booklet issued Feb. 18 and on panes of stamps with se-tenant labels.

The booklet contains six of the first-class Penny Red stamp-on-stamp designs. The cover of the booklet includes the following Sept. 17, 1840, quote from Rowland Hill, the British postal reformer who is considered the inventor of the postage stamp: “[The colour] of the future penny Label must obviously be a colour which is readily distinguished either from black or from blue. Red, for instance [,] would be unobjectionable.”

A pane of 20 with the Penny Red stamp-on-stamps designs includes labels showing the development of this stamp. Another pane of 20 and a pane of 10 include labels that can be personalized.

Additional Royal Mail products offered in conjunction with the Royal Mail 500 issue include first-day covers, 11 postcards reproducing the designs of the stamps and the souvenir sheet, and a presentation pack.