Tip of the week: Latakia 1931 overprinted postage due stamps 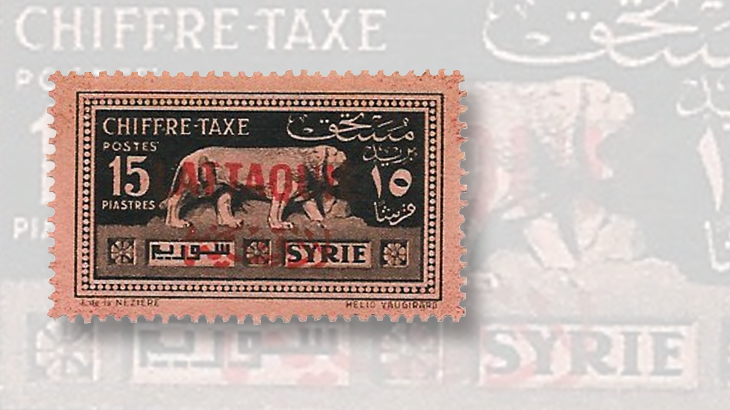 The two Latakia 1931 overprinted postage due stamps (Scott J1-J2) are a good buy in unused hinged condition at the 2016 Scott Classic Specialized Catalogue of Stamps and Covers 1840-1940 values of $24 each.

Syria has been much in the news of late because of the ongoing civil war with tens of thousands killed, millions of refugees, the rampages of ISIS, Russian military intervention, and other sad events.

Memories of a happier time can be found in the stamps of Latakia.

At present, Latakia is Syria’s chief seaport and the capital of the Latakia Governorate. In the time of the Roman Empire, the city was a colony, Laodicea ad Mare (not to be confused with Laodicea on the Lychus).

The population was predominantly Christian with a large Jewish minority, until it was conquered by the Muslims in 637. Retaken by the Crusaders in the 12th century, it fell to the Ottoman Empire in the 13th century.

Under the Ottomans, it became a center of the Alawite branch of Shia Islam. It became a French mandate of the League of Nations in 1920, and was also known as the Alawite State.

In 1936, it was absorbed by the Syrian Republic. The 2016 Scott Classic Specialized Catalogue of Stamps and Covers 1840-1940 lists just 35 stamps of Latakia. This dead country offers the opportunity for forming a finite collection but with the possibility of specialization.

The 2016 Scott Classic Specialized catalog values the stamps at $24 each in unused hinged condition. The stamps are in demand and selling for full Scott catalog value.