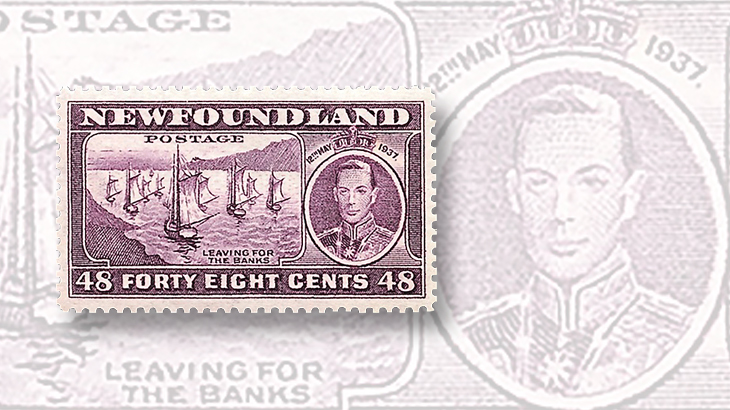 The 1937 Newfoundland set of 11 Local Scenes and King George VI stamps comb-perforated gauge 13.3 by 13.2 (Scott 233a-243c) are difficult to find in unused hinged condition. Grades of very fine or better are worth searching for.

Newfoundland is a large island in the Atlantic Ocean off the coast of Canada.

Newfoundland was the first overseas English colony, and it remained a British dominion until March 31, 1949, when it became a Canadian province.

On May 12, 1937, Newfoundland issued a set of 11 stamps with designs showing scenes of Newfoundland with an inset portrait of King George VI (Scott 233-243). The 2016 Scott Classic Specialized Catalogue of Stamps and Covers 1840-1940 values the set at $34.50 in unused hinged condition and at $49.05 in mint never-hinged condition. This is a popular set, and it is generally available at Scott catalog value.

Most of the issue was line perforated using two perforating machines. The gauge on one was 13.7 and on the other was 14.1, usually rounded to 13.5 and 14 in catalogs. However, some of the stamps were comb perforated gauge 13.3 by 13.2. The Scott Classic Specialized catalog lists and values these separately with minor catalog numbers (Scott 233a-243c). Most do not vary greatly in value from the line-perforated stamps. However, a few are much more valuable: The 14¢ black stamp (Scott 238b) is valued at $20,000 in unused hinged condition.

All of the comb-perforated stamps are harder to find in grades of very fine or better than their line-perforated counterparts. We think they are worth searching for. It is likely that some dealers have them lurking unrecognized in their stock.