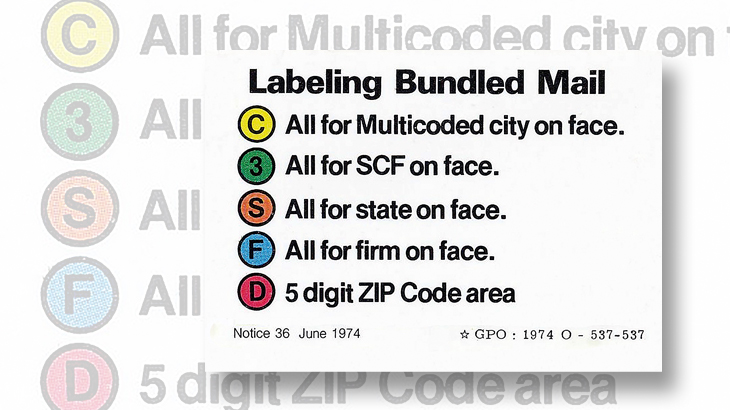 This United States Postal Service notice from June 1974 illustrates and partly defines the uses of some of the first pressure-sensitive labels to be applied to packages of presorted domestic mail. 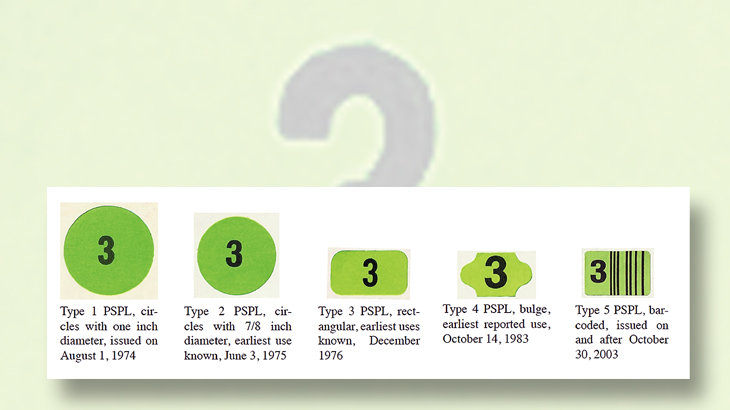 This key identifies the five different green “3” type of labels and their approximate times of introduction.
Previous
Next

In my last column (Linn’s, Feb. 8, page 25), I mentioned the new book I am researching and writing. One of the topics in the book is the history of the process of presorting mail to enable more efficient delivery.

Starting Aug. 1, 1974, a series of pressure-sensitive package labels (PSPL) was introduced that made this sorting more effective.

The first illustration pictured here shows an official United States Postal Service notice from June 1974 with approximations of the first set of five PSPLs along with brief comments defining them, though somewhat imprecisely.

I am pleased to say that, just in the month of January 2016, I’ve become fairly knowledgeable about these labels, thanks to several factors: articles from 1970-80 by Stuart Gitlow, H.E. Menker and R.J. Mazzaferro; the willingness of John Hotchner, Tom Breske, and Doug Quine to lend me their covers for study; and, finally, the availability of the USPS Postal Bulletin and Postal Manual, including the domestic service manuals.

This is a fascinating story that I have been able to flesh out beautifully and more completely thanks to all of the above.

Effective July 1, 1968 — mainly because of the introduction of ZIP codes on July 1, 1963 — presorting of mail began in a new, organized manner, because it sorted pieces into bundles (packages) with associated facing slips on them (except those made up for a five-digit ZIP code area).

The facing slips were used initially only by post office workers, but their use was extended to the private sector on Aug. 22, 1968.

Presently, much of the matter that is presorted is first sorted and placed in trays and sacks. We are not interested in these sorted items because labels were not placed on them and therefore they carry no indication of the sorting that took place.

The whole story is so complex that I can’t explain it all here, even in two columns, but in this first installment I’ll point out some of the new conclusions I have come to. In a second column, I will point out areas that are still incompletely understood.

We now know that there are five different label types or styles, including the bar-coded style introduced in late 2003. The second illustration on this page shows the five types of the green “3” label, as well as indicating approximately when they were introduced.

The first label style was introduced Aug. 1, 1974. At the start, residual first-class, second-class, and third-class mail was sorted into packages or bundles using these labels. Initially, the advantage of this presorting was only in continuing to expedite the delivery of the mails.

Eventually, other types of labels were introduced, including the purple label “CR,” a pink label “A,” a tan label “MS/MXD” and, finally, the whole group of bar-coded labels.

Only from July 6, 1976, was first-class, second-class, and third-class mail first presorted to trays and sacks, not using these labels. Then, if there was any presorted residual, it was sorted into packages or bundles using the labels.

In addition, as of this later date, first-class mail, if presorted, was eligible for discounted rates, and the presorting occurred in an organized fashion starting with five-digit ZIP code areas, followed by city sorting, then sectional center facility sorting, and so on.

Finally, as of July 6, 1976, the definitions of the sorting groups were different for each class of mail.

So, it can be seen that over the years, from 1974 to the present, the types of presorting, and labels used, varied among the classes of mail, in a complicated fashion that is too involved to present here, but will be explained in my new book.

Thanks to the covers that have been made available to me, especially those provided by Hotchner, I have been able to add what I believe to be some important dating information concerning when the second to fourth label types were introduced.

For instance, from what I have read, it seems to have been believed that the second label type (seven-eighths-inch round dots) was first used around January 1976. However, Hotchner has numerous examples on cover used in the second half of 1975 — as early as June 3, 1975.

In my next column, I will discuss two areas of presorting that are still not understood, as well as some areas where I know sorting existed, but where no examples of pressure-sensitive package labels on piece are known to me.

Tony Wawrukiewicz and Henry Beecher are the co-authors of two useful books on U.S. domestic and international postage rates since 1872. The third edition of the domestic book is available from the American Philatelic Society, while the international book may be ordered from Wawrukiewicz.