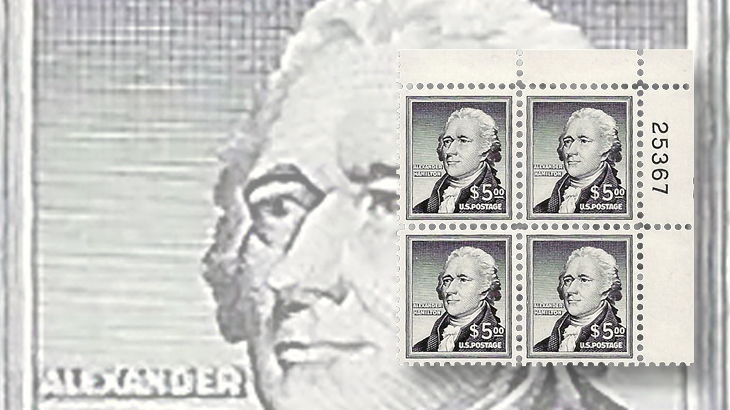 Just a single plate, No. 25367, was used to print all $5 Alexander Hamilton stamps at the Bureau of Engraving and Printing. 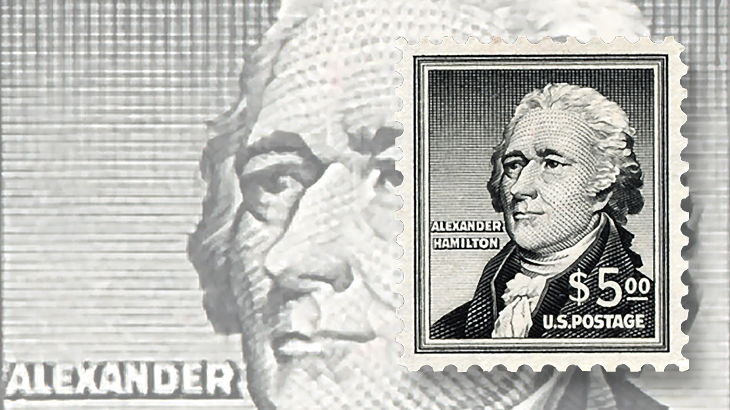 A pair of $5 Hamilton stamps was used to pay most of the $12.43 in postage used to mail this 1972 registered cover from a bank in Illinois.

Just 17 commercial covers franked with the $5 Hamilton stamp have been discovered in the past 20 years. The most recent find, shown here, is a registered cover sent in 1970.
Previous
Next

In the January Dollar-Sign Stamps, I explored the $1 Patrick Henry stamp of the United States Liberty definitive (regular-issue) series, which was in use from 1954 to 1980.

The year 1980 coincides with the appearance of the final variety of the series: the 25¢ Paul Revere coil stamp will dull gum.

This month’s column takes up the only other dollar-denominated Liberty stamp: the $5 Alexander Hamilton issued March 19, 1956 (Scott 1053).

Unlike the other Liberty stamps, which were produced on rotary presses, the $5 Hamilton was printed on a flat-plate press in sheets of 400 subjects that were then cut into panes of 100 stamps for sale at post offices.

A single plate was used at the Bureau of Engraving and Printing to produce the entire run of $5 Hamilton stamps.

As a consequence, panes, plate blocks, and plate-number singles bear just one number, 25367.

Multiples of the stamp in mint condition are readily available, as are used singles.

More than 34,000 first-day covers were surfaced, and they, too, are not difficult to locate.

What has proven surprisingly challenging to locate are commercial, contemporaneous uses of the stamp on cover.

For the better part of 20 years, aficionados of the Liberty series have searched diligently for true commercial uses of the $5 Hamilton.

It might surprise you to learn that the first such cover came to light in 1997.

Linn’s page 1 report in the Dec. 22, 1997, announced this important find to the philatelic world.

Since that time, just 16 more commercial $5 Hamilton covers have surfaced, for a total of 17, according to a census that Linn’s maintains.

These include four postage due uses, eight registered bank covers and five that were sent between collectors and stamp dealers.

The 17th and most recent commercial $5 Hamilton cover to surface is pictured nearby: a No. 10-size envelope sent via registered mail in April 1970 from Cape May, N.J., to the Bank of New Jersey in Camden, N.J.

This cover turned up in an eBay auction in October 2014 and was purchased by a collector from Ohio for a little more than $150.

Use of the $5 Hamilton from the 1954-73 Liberty series was common into the early 1970s, as post offices depleted their stocks of Liberty stamps and replaced them with stamps from the 1965-78 Prominent Americans series.

Given that the Prominent Americans $5 John Bassett Moore stamp (Scott 1295) was issued in December 1966, the 1970 cover represents a somewhat out-of-period use of the Hamilton stamp. Nonetheless, it is a true commercial use.

Also illustrated here is another late use of the $5 Hamilton — this time on a 1972 registered cover sent from a bank in Crystal Lake, Ill., to the recipient in Elgin, Ill. It sold in a 2003 eBay auction for $212.

What makes this cover extra appealing is the pair of $5 Hamilton stamps used to pay the lion’s share of the $12.43 in postage.

Docketing on the back of the cover (not shown) reads “$46,000” in blue ink. This likely refers to the value of the contents, which likely was a financial instrument of some sort — a cashier’s check, perhaps.

Why are commercial $5 Hamilton covers so scarce today?

According to some specialists, it has to do with the popularity of stamps over postal history when the $5 Hamilton was current.

Many covers were sacrificed to provide stamps that found their way into the mixture and packet trade. Other $5 Hamilton covers might still be lurking in the archives of banks around the country. As pointed out here, eight of the 17 commercial uses in Linn’s census are registered bank covers.

Not all postal history of the Liberty series heavyweight is expensive.

A registered bank tag franked with a $5 Hamilton is valued at $25 in the Scott Specialized Catalogue of United States Stamps and Covers.

A bit pricier is a use on an air parcel-post tag, which is valued at $75.