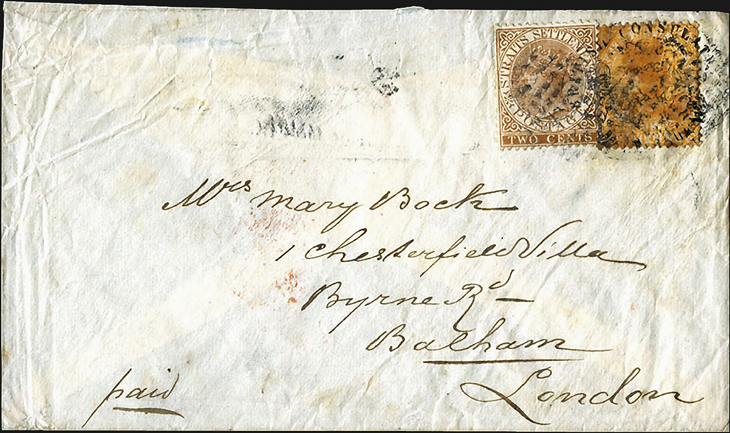 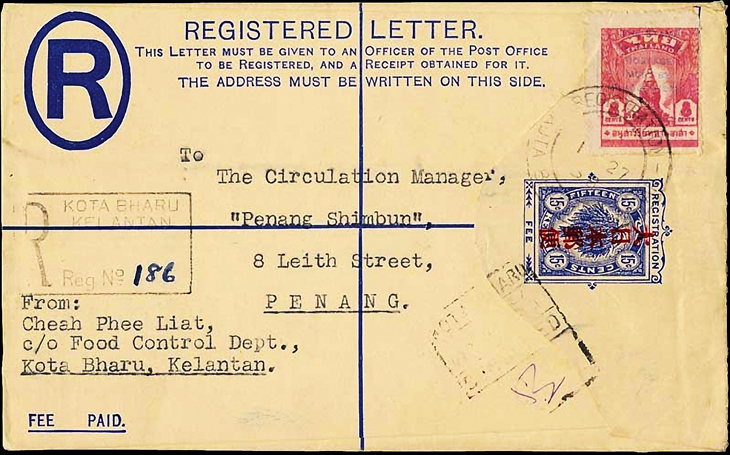 Eur-Seree Collecting Company Ltd. in Bangkok, Thailand, offered a registered cover with scarce postmarks and censor markings from the Thai occupation of Malaya-Kelantan during World War II. It brought about $13,000 at the firm’s November 2015 sale.
Previous
Next

Linn’s reader Frederick Lawrence of Arizona wrote to ask if we could cover more sales of his favorite area, Thailand, formerly known as Siam. Lawrence is president of the Society for Thai Philately, and he forwarded a copy of a recent newsletter from the United Kingdom-based Thailand Philatelic Society, which happened to mention another item from the David Feldman sale held Dec. 11, 2015, in Geneva.

An 1882 cover sent from Bangkok to London was franked with Straits Settlements 2¢ bister brown and 8¢ orange Queen Victoria stamps (Scott 40, 49) tied with a rare oval “British Consulate Bangkok” marking rather than the normal Bangkok circular datestamp.

Though somewhat rumpled, this recently discovered cover, one of just a handful known, brought more than $25,000.

One of the more exceptional items in that firm’s Nov. 28-29, 2015, sale was a registered cover from the Thai occupation of Malaya-Kelantan during World War II.

The registered envelope has an imprinted 15¢ registration stamp for the Malayan province of Kedah, overprinted in red for the Japanese occupation that took place concurrently with Thailand’s. The envelope, addressed to Penang, is uprated with a Thai 8¢ stamp (Malaya under Thai Occupation Scott 2N5) and canceled with a variety of scarce Kota Bharu postmarks and censor markings.

Lawrence said that Vitoon Eurtivong, the managing director of Eur-Seree, plans to address a meeting of the Society for Thai Philately during World Stamp Show–NY 2016, which is taking place at the Javits Convention Center in New York City from May 28 to June 4.