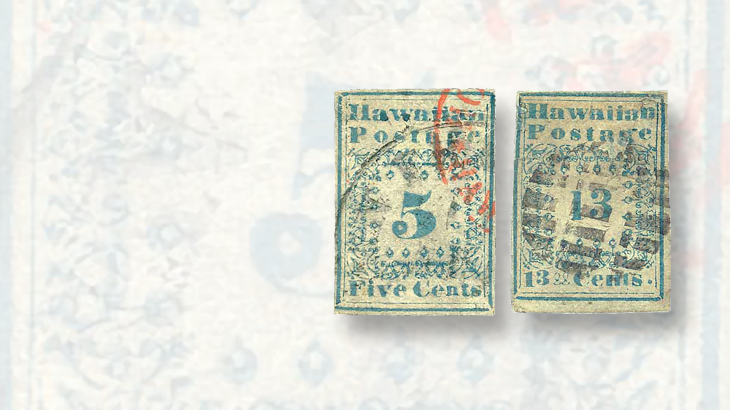 The Jan. 8-10 Harmer-Schau auction in Los Angeles featured these two Hawaii Missionary stamps. The 5¢ stamp at left, once part of the Ishikawa collection, realized $28,750. The stamp on the right is a rebacked 13¢ Hawaii Missionary that fetched $24,150.

Harmer-Schau offered U.S. and possessions Jan. 8-10 in Los Angeles that included a Hawaii Missionary stamp and a very scarce coil line pair of the Washington-Franklin 2¢ type I (Scott 449). The sale was previewed in Linn’s Jan. 4.

The Washington-Franklin series was current at a time when the Bureau of Engraving and Printing was developing or experimenting with several new stamp production methods, including the use of rotary presses and the introduction of coil stamps, resulting in a number of subtle variations in otherwise common-appearing definitive stamps.

In the case of the pair offered by Harmer-Schau, “the Type I plate was not very deeply engraved and the curvature of the rotary press yielded impressions lacking in some of the details. The Bureau noticed this immediately, and quickly replaced it with the Type III plate,” according to the auction description.

The resulting type I coils were in use for only a very brief period, perhaps as little as six weeks. Just 10 or 11 line pairs, in which a line of color between two stamps marks where the plates came full circle and joined up on the press, survive in collector hands, and half of those are faulty.

The pair in this sale, graded 75 but with a very light cancel and otherwise “immaculate,” went for $23,000, including Harmer-Schau’s 15 percent buyer’s premium.

A 5¢ Hawaii Missionary (Scott 2), one of the legendary 1851-52 first issues made by white missionaries living in what were then called the Sandwich Islands, was offered as a handsome example of the mere 39 used survivors.

Due to their fragile nature, the Scott catalog values Hawaii Missionaries “with minor damage that has been skillfully repaired,” and this example, formerly owned by Ryohei Ishikawa, was no exception. It sold for $28,750.

A 13¢ “Hawaiian Postage” of the same issue (Scott 3) was described as rebacked to hide repaired faults. Perhaps for that reason, Harmer-Schau estimated it at $8,000-$10,000. It nonetheless fetched $24,150, a testament to the enduring allure of these classic stamps.