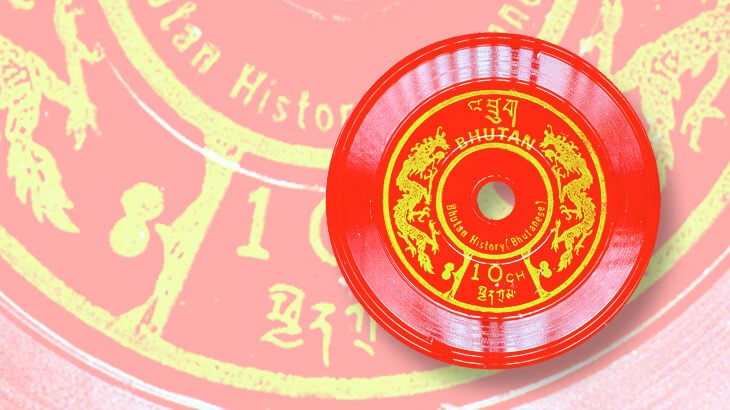 Burt Todd, a self-proclaimed "adventurer," from Pennsylvania designed these record-playing stamps in 1972 in order to raise government funds for the Southeast Asian country of Bhutan.

This is a rare concept in the stamp hobby.

Todd went on to befriend the king of Bhutan at the time, and convinced him to issue postage stamps as a means for raising government funds. The funds would help protect the country who was always under threat it’s world powers just across the border, while also raising it’s status with new, cutting edge postal material.

Kera News sat down with journalist Chris May of thevinylfactory.com to learn more about these underrated designs and their current relevance in the stamp hobby.

Ideas morphed into silk prints, dye options, steel-based stamps, and even 3-D issues. The outlandish options culminated in stamps that could be played on a record player.

The price for these stamps is now in the $400-range and is only going up.

“I mean five years ago, they were worth a fraction of that,” May said of the current stamp price.

“And the reason they’ve gone up so much in price I think is you not only got stamp collectors appreciating them, but now – the angle from which I was originally interested in – people who were collecting vinyl, as well.”

Romania, Monaco, and The Netherlands all focused their first 2016 postage issues around art.

Have a look at the some of the art

“For mountain climbers, the ultimate thrill is the summit of Mt. Everest: There are no higher peaks to climb. For stamp collectors in the United States and around the world, the equivalent of summiting Everest will be attending World Stamp Show-NY 2016 in New York City.”

The show will feature exhibits, forums, and countless variations of stamps and postage material.

Here’s what you can expect