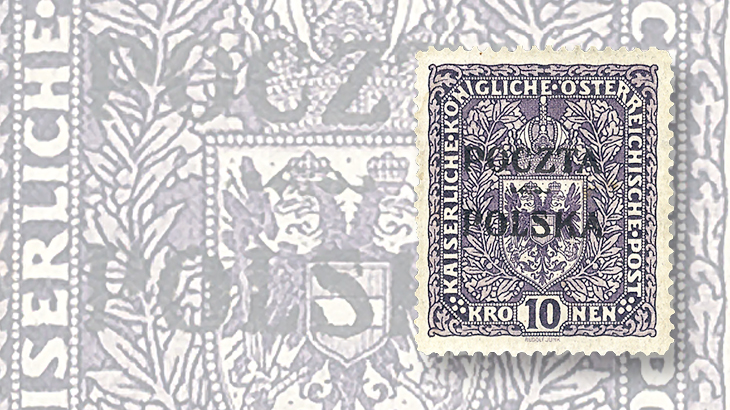 Post-World War I Poland used German and Austrian stamps overprinted with “Poczta Polska.” A very elusive overprinted grayish-violet 10-krone of Austria’s 1916-18 Coat of Arms set was sold in January by Cherrystone Auctions for $13,225 at its offices in Ne

Cherrystone Auctions Inc. held a sale of worldwide stamps and covers on Jan. 12-13 at its offices in New York. Two scarce early stamps of Poland were among the highlights.

Poland disappeared from the map for most of the 19th century after being partitioned by Russia, Prussia and Austria. When the nation was reconstituted at the end of World War I, its postal system made do initially by overprinting German or Austrian stamps on hand with the words “Poczta Polska” (Polish Post).

Some of the resulting issues are plentiful and inexpensive, but a few are very elusive. One of these is the 10-krone high denomination of Austria’s 1916-18 Coat of Arms set, overprinted in Krakow (Poland Scott 55). Only 440 were made.

The Scott Classic Specialized Catalogue of Stamps and Covers 1840-1940 notes that these overprints have been extensively counterfeited and that expertizing is vital.

Cherrystone offered two examples of this stamp, both with more than one expert’s affirmation. The first, an unused, hinged example, sold for $10,925, including the 15 percent buyer’s premium levied by Cherrystone on all lots.

The second example, in a grayish-violet shade not recognized by the Scott Classic Specialized catalog but listed in the Michel catalog as 47b, also unused and with a couple of creases, sold for $13,225.

Just 15 to 45 examples of the 440 total are estimated to belong to this scarce shade.