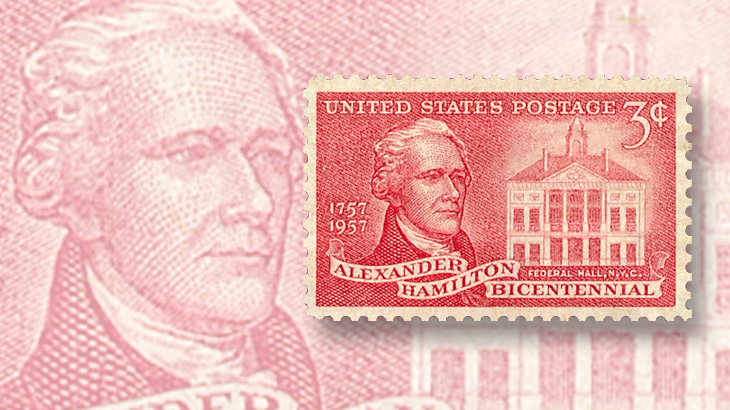 The 3¢ Alexander Hamilton commemorative was issued in 1957 to mark Hamilton's birth bicentennial.

Alexander Hamilton may be more familiar to us than some of the other Founding Fathers of the United States simply because his portrait has been featured on the $10 bill since 1929. He earned that honor, however, as a significant contributor to the early formation of the American government and its economic structure.

Hamilton was born Jan. 11, 1757, in Charlestown, Nevis, an island in the West Indies. He was the son of an itinerant Scottish trader and a French woman who was married to someone else at the time.

Sponsored by a merchant for whom he worked, Hamilton was sent to the United States at age 15. Soon after, he began studying at King’s College (now Columbia University).

In the Continental Army during the Revolutionary War, Hamilton served as an aide to George Washington and the two men developed a close friendship. Hamilton married Elizabeth Schuyler in 1780 and set up a law practice in New York City.

He was elected to the Continental Congress, and with John Jay and James Madison he wrote The Federalist Papers, a collection of essays that promoted the adoption of the Constitution.

Hamilton was named Secretary of the Treasury in 1789 under Washington, and he shaped policies that provided financial stability for the new nation.

During his career he was often at odds with others, including Madison and Thomas Jefferson, who opposed some of Hamilton’s economic programs. John Adams, a federalist like Hamilton, was another frequent opponent.

His conflict with Aaron Burr eventually turned deadly. In the presidential election of 1800 between Burr and Jefferson, Hamilton supported Jefferson despite their differences. Burr had earlier embarrassed Hamilton by publishing a private document Hamilton had written criticizing John Adams. Jefferson overcame an electoral deadlock to defeat Burr.

After serving as vice president, Burr sought to become governor of New York. Hamilton spoke out against him, and Burr challenged Hamilton to duel with pistols. The two men met in Weehawken, N.J. on July 11, 1804; Hamilton’s shot missed Burr, but Burr mortally wounded Hamilton, who died the following day. He was 47 years old.