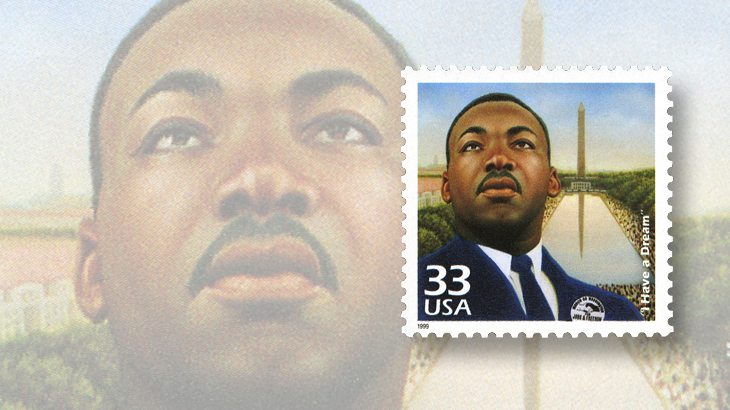 Martin Luther King Jr. was honored on a 33¢ Celebrate the Century stamp in 1999.

American civil rights leader Martin Luther King Jr. was born Jan. 15, 1929, in Atlanta, Ga., the son of Martin Luther King Sr., a minister who would become the leader of the Ebenezer Baptist Church in 1931, and his wife, Alberta Christine Williams King.

Martin Jr. and his father were both born with the name Michael King, but their names were changed in 1934. The family included Martin Jr.'s older sister, Willie Christine King, and younger brother, Alfred Daniel Williams King.

From Booker T. Washington High School in Atlanta, King entered Morehouse College in 1944 at age 15, graduating with a bachelor’s degree in sociology. In 1948 he began studies at Crozer Theological Seminary in Pennsylvania, graduating in 1951. His postgraduate studies at Boston University led to his Ph.D. in systematic theology in 1955.

In 1953 he married Coretta Scott, whom he met while she was studying at the New England Conservatory of Music in Boston. The following year, at age 25, King became pastor of Dexter Avenue Baptist Church in Montgomery, Ala.

On Dec. 1, 1955, black seamstress Rosa Parks was arrested for refusing to give up her seat for a white passenger on a Montgomery city bus. Local leaders gathered at the Dexter Avenue church and formed the Montgomery Improvement Association, with plans to boycott the city bus line as a protest of discriminatory laws. King was chosen as the president of the group and organized a successful boycott that lasted more than a year.

King’s commitment to the civil rights cause continued with his election as president of the Southern Christian Leadership Conference in 1957. A gifted and dynamic speaker, King traveled throughout the country, leading nonviolent efforts to bring about an end to discrimination and to achieve equal rights for all.

The Kings were parents to four children: daughters Yolanda and Bernice, and sons Martin Luther III and Dexter Scott. In 1960, Martin Luther King Jr. became co-pastor, with his father, at Ebenezer Baptist Church.

King supported protests across the south, including lunch counter sit-ins in North Carolina, and a demonstration King organized in Birmingham in 1963. Through nonviolent means, the protestors made advances, slowly dismantling laws that oppressed black citizens.

In 1963, King was a leader of the March on Washington for Jobs and Freedom, and at the Lincoln Memorial he delivered his stirring “I Have a Dream” speech. He was named Time magazine’s 1963 Man of the Year, and in 1964 he won the Nobel Peace Prize.

King became a famous national and international figure, leading the civil rights movement that grew with the work and devotion of many other individuals. When the Civil Rights Act of 1964 was signed by President Lyndon B. Johnson, King and other civil rights leaders were present at the ceremony, and met with the president at the White House.

King continued to work for social and economic justice, leading a 1965 protest on the Edmund Pettus Bridge in Selma, Ala., where civil rights marchers had been attacked by law officers only days earlier.

King’s life ended tragically on April 4, 1968, in Memphis, Tenn., where he had traveled to support a sanitation workers’ strike. While standing on the balcony of a Memphis motel, he was shot and killed by a sniper’s bullet at age 39.