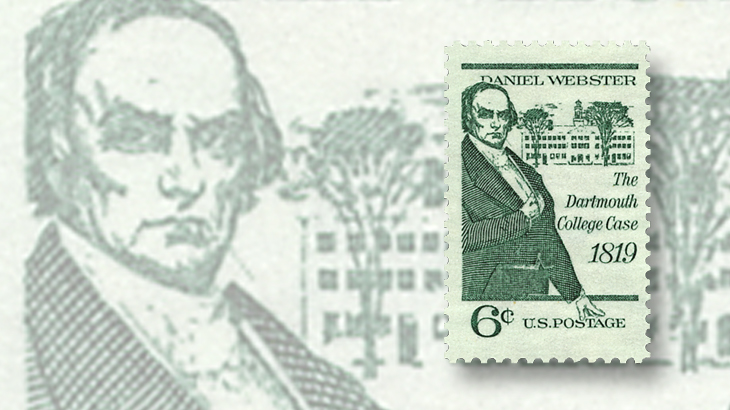 Daniel Webster features prominently on a 6¢ commemorative stamp issued in 1969.

Daniel Webster was a United States congressman, senator, secretary of state, and candidate for the office of president; he was born into a farming family on Jan. 18, 1782, in Salisbury, N.H.

Webster attended school in New Hampshire at Phillips Exeter Academy and Dartmouth College. He studied law and became involved in the political events leading up to the War of 1812, speaking before the Washington Benevolent Society, a political group.

As a Federalist, he was elected to Congress as a representative from New Hampshire, serving two terms before moving to Boston. He was retained by the trustees of Dartmouth College in a landmark case argued before the U.S. Supreme Court. The case was decided in 1819 after Webster successfully invoked the Contract Clause of the U.S. Constitution.

Webster was again elected to Congress, this time representing Boston, in 1822. He was a gifted orator, and his appearance at prominent national events helped to grow his reputation. He was elected to the U.S. Senate in 1827. He opposed President Andrew Jackson’s economic policies, and in 1836 he ran as one of four Whig candidates against Jackson’s vice president, Martin Van Buren (who defeated them all to win the election).

When William Henry Harrison became president with the election of 1840, he named Webster as his secretary of state. Webster returned to the Senate in 1845, and supported the Compromise of 1850 that sought to resolve the growing rift between the North and South, but the inclusion of the Fugitive Slave Law in the compromise led antislavery supporters to attack Webster for his stance.

President Millard Fillmore named Webster to his second stint as secretary of state in 1850. He sought the Whig party nomination for the 1852 presidential election, but died at age 70 on Oct. 24, 1852, from injuries incurred after he fell from his horse.