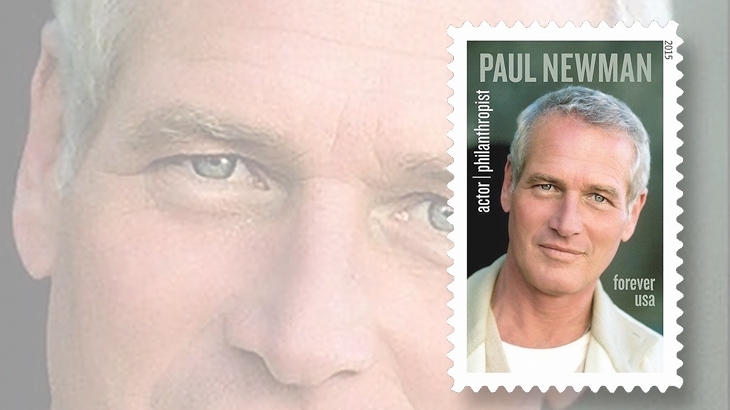 Actor and philanthropist Paul Newman was honored on a forever stamp issued in 2015.

Actor and philanthropist Paul Leonard Newman was born in Shaker Heights, Ohio, on Jan. 26, 1925, and attended Ohio University before joining the Navy in World War II and serving in the Pacific theater.

He studied drama at Yale and at the New York Actor’s Studio, and began appearing on stage and in television programs in the 1950s.

His Broadway debut came in the 1953 production of Picnic by William Inge, and his first Hollywood film was The Silver Chalice in 1954.

After completing several more films, Newman achieved stardom (and earned an Academy Award nomination) opposite Elizabeth Taylor in Cat on a Hot Tin Roof in 1958.

He was nominated again three years later for his role as Eddie Felson in The Hustler (1961). Newman earned several Oscar nominations during his career but just one win, for The Color of Money in 1986.

Newman also directed several films, and returned to the stage from time to time.

Newman also established and funded several charitable organizations, including his Newman’s Own food company, which donates all profits and royalties from its 200-plus products to thousands of charities. The Serious Fun Children’s Network founded by Paul Newman aids seriously ill children and their families with access to camps and other programs.

Newman was an avid auto racing enthusiast, both as a driver and as a team owner. At age 70, he won the GT1 championship at the Daytona Rolex 24.

Newman was married twice: to Jackie Witte from 1949 to 1958, with whom he had a son and two daughters (his son Scott died in 1978), and to actress Joanne Woodward from 1958 until Newman’s death from lung cancer at age 83 on Sept. 26, 2008. Newman and Woodward had three daughters together.