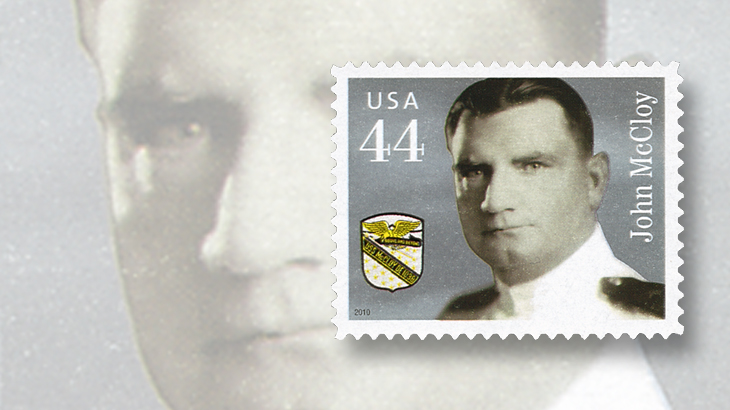 John McCloy, who twice was awarded the Medal of Honor, is shown on a 44¢ stamp issued in 2010.

John McCloy, a Navy hero who twice received the Medal of Honor, was born Jan. 3, 1876, in Brewster, N.Y. He enlisted in the Navy at age 22 and was assigned to the USS Columbia.

His first Medal of Honor was awarded two years later for his meritorious conduct as part of the China Relief Expedition landing force during the Boxer Rebellion.

At Vera Cruz during the 1914 Mexican Revolt, McCloy, as Chief Boatswain, intentionally drew enemy fire with his ship to allow U.S. cruisers to retaliate against the enemy and save American lives. During the event, McCloy was shot in the thigh but remained at his post, and was again named to receive the Medal of Honor.

After World War I he commanded the USS Curlew, a North Sea minesweeper, and was awarded the Navy Cross.