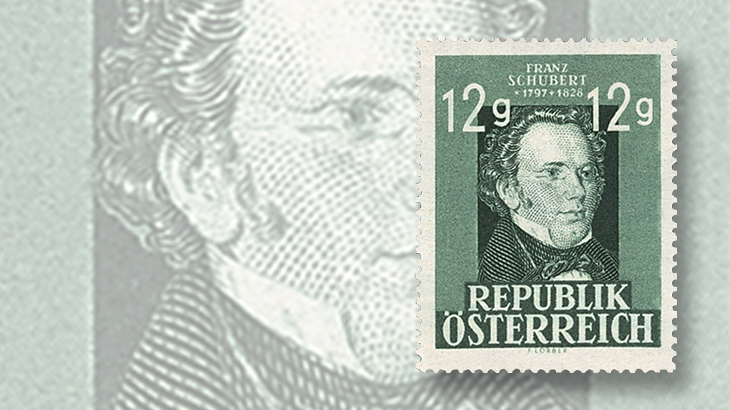 Austrian composer Franz Schubert, on that country's 12-groschen stamp from 1947.

Franz Schubert was born Jan. 31, 1797, in Himmelpfortgrund, a suburb of Vienna, Austria. The son of a schoolteacher, Schubert was introduced to music by his father, and began to study piano and violin at an early age, receiving additional instruction from his older brother Ignaz.

Because of his fine singing voice, he later studied at the Stadtkonvikt as a choirboy, but his interest in composition led to instruction with the renowned Austrian composer Antonio Salieri. Still in his teens, he produced numerous complex works, including string quartets and a symphony.

After leaving the Stadtkonvikt, Schubert worked as a teacher, but he continued to write music at an accelerating pace. Many of his songs were performed locally, but fame as a composer seemed to elude him.

Schubert’s fame continued to grow after his death, and his music was performed more frequently. Though he achieved moderate recognition during his lifetime, he is now considered a titan, the last great composer of the Classical period.

Schubert has appeared on many stamps from Austria and other countries, including Austria’s 12-groschen dark green stamp issued in 1947 to mark the composer’s 150th birth anniversary (Scott 491).