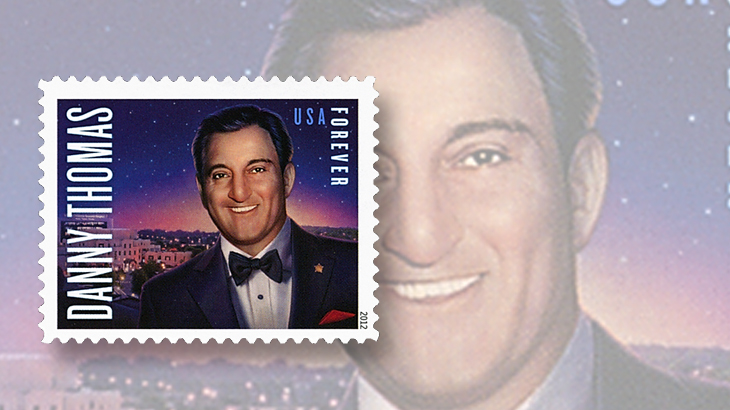 American entertainer Danny Thomas was also the founder of St. Jude Children's Research Hospital in Memphis, Tenn. He is honored on a forever stamp from 2012.

American actor and philanthropist Danny Thomas was born Amos Muzyad Yakhoob Kairouz on Jan. 6, 1912, in Deerfield, Mich., the son of Catholic immigrants from Lebanon. He attended high school in Toledo, Ohio, and college at the University of Toledo.

He met singer and actress Rose Marie Cassaniti in Detroit and they married in 1936.

Struggling as an entertainer, Thomas sought guidance from his church, and prayed to St. Jude Thaddeus, the patron saint of hopeless causes.

When he found success as an actor, he remembered his appeal to St. Jude. In the 1950s, he began working with businessmen to establish a charitable children’s hospital in Memphis, Tenn., and a fundraising organization, ALSAC, to support the hospital financially.

In the entertainment field, Thomas found great success as the star of the 1953 television comedy series Make Room for Daddy, which ran for 11 seasons. He was also executive producer for several popular television series, including The Joey Bishop Show, The Dick Van Dyke Show, and several episodes of The Andy Griffith Show.

He was a popular guest for many years on television programs, variety specials, and talk shows.

Danny Thomas died Feb. 6, 1991. His children Marlo, Terre, and Tony continue his support of the hospital.

A forever stamp honoring Thomas for his entertainment career and his philanthropic successes was issued Feb. 16, 2012 (Scott 4628). The stamp features a portrait of Thomas along with the St. Jude Children’s Research Hospital.