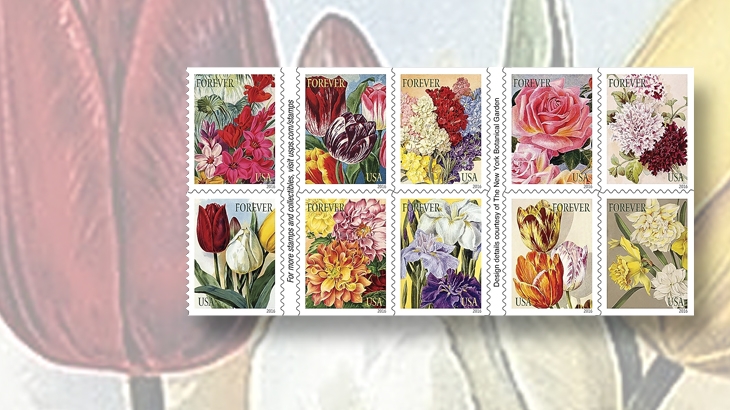 A set of 10 Botanical Art stamps will be issued Jan. 29 in Atlanta, with a first-day ceremony during the American Philatelic Society’s Ameristamp Expo 2016 at the downtown Hilton Atlanta. 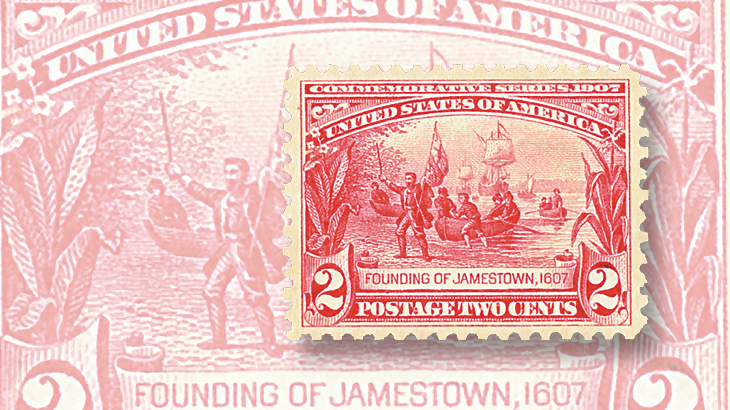 An early depiction of a flower on a United States stamp is the tobacco flower sprouting on the 2¢ issue from the 1907 Jamestown Exposition set.
Previous
Next

Century-old paintings of flowers are prominently featured on 10 new United States Botanical Art stamps that will be issued Jan. 29 in panes of 10 and in double-sided panes of 20. The Postal Service identifies these formats as booklets.

The stamps will be introduced with a first-day ceremony at the American Philatelic Society’s annual winter stamp show, Ameristamp Expo 2016.

This year’s winter show is taking place at the downtown Hilton Atlanta, 255 Courtland St. NE, in Atlanta. The first-day ceremony will begin at 11 a.m. in the Crystal Ballroom. Admission is free, and the ceremony is open to the public.

According to the APS, Dawn Hamman of the American Topical Association will serve as master of ceremonies for the Botanical Art stamp event, with additional participants Mildred Pinnell Fockele of the Atlanta Botanical Garden, Scott English of the American Philatelic Society, Austin Foo of the APS Young Philatelic Leaders Fellowship, and Kristen Seaver of the United States Postal Service.

This stamp issue was designed by USPS art director Ethel Kessler using illustrations that were published in American nursery catalogs between 1891 and 1912.

“The design details are courtesy of The New York Botanical Garden,” said the Postal Service. “The catalogs are part of the NYBG’s Nursery and Seed Catalog Collection, one of the largest and most important collections in the U.S.”

The Postal Service has identified the flowers depicted on the stamps, from left to right on the top row, as corn lilies, tulips, stocks, roses, and petunias. The bottom row from left shows tulips; dahlias; Japanese iris; tulips; and, on the final stamp, a pairing of daffodils and jonquils.

Botanical artwork has been part of United States stamps ever since the first issues in 1847. The frames around the 5¢ Benjamin Franklin and the 10¢ George Washington stamps (Scott 1-2) each have a background depicting a wreath of leaves.

The 2¢ stamp in the 1907 Jamestown Exposition set (Scott 329) features an actual flower, apparently sprouting from a tobacco plant. You can see it if you look carefully along the upper left side of the stamp, just left of the “U” in “UNITED STATES.”

A vase with flowers is featured in the 3¢ Mothers of America issue (Scott 737), which reproduces James A. Whistler’s portrait of his mother, commonly known as “Whistler’s Mother,” but formally titled An Arrangement in Grey and Black.

The stamp, however, is printed in purple, and the flowers — inexplicably added at some point during the development of the design — were never part of Whistler’s original painting.

Other than the Botanical Art stamps, the designs of the announced stamps for 2016 have relatively few flowers sprouting on them, though the background of the Madonna and Child painting planned for the 2016 Christmas stamp shows a pleasant mixture of pink and white blooms.

Press sheets of the Botanical Art stamps are being issued both with and without the die cuts that normally separate individual stamps.

Each press sheet contains 160 stamps, or eight of the 20-stamp double-sided panes, and sells for $78.40, the face value of the stamps on the sheet.

The Postal Service is making available 300 sheets with die cuts and 350 sheets without die cuts.

Technical details and first-day cancel ordering information for the Botanical Art forever stamps are presented below.

Standard ordering instructions apply. Collectors requesting first-day cancels are encouraged to purchase their own stamps and affix them to envelopes. The first-day cover envelopes should be addressed for return (a removable label may be used), and mailed in a larger envelope addressed to Botanical Art Stamps, Atlanta MPO, Postmaster, 3900 Crown Road, Atlanta, GA 30304-9998. Requests for first-day cancels must be postmarked by March 29.