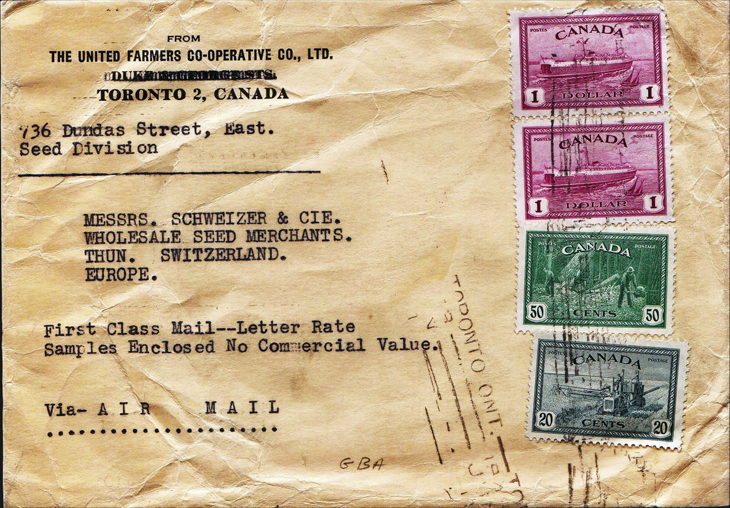 On this June 1, 1948, cover, high-denomination Peace stamps paid the correct 18-times airmail postage of $2.70 to send a sample of seeds from United Farmers Co-Op headquarters in Toronto to wholesale seed merchants in Switzerland.

Franked with a mix of Canada’s War and Peace pictorial definitives, this Oct. 10, 1946, triple-weight registered cover from Toronto to Shanghai pays the special airmail rate to China of 60¢ per ¼ ounce, a rate in effect for only the first 46 days after th 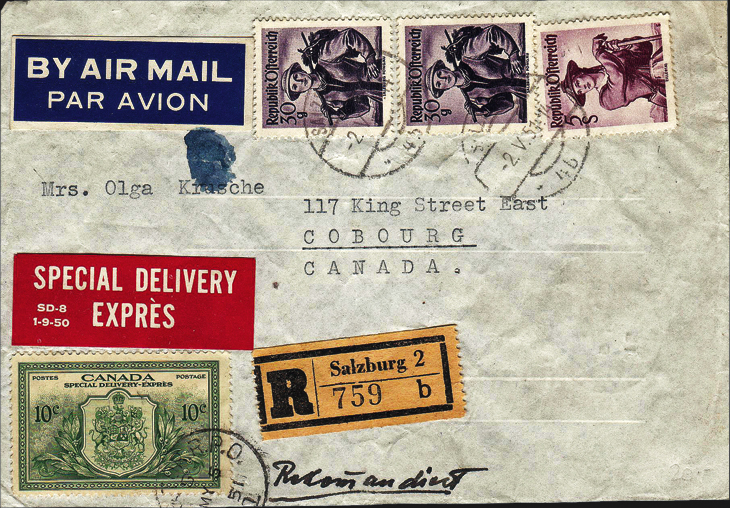 What’s unusual about this May 2, 1951, registered cover from Salzburg is not the Austria franking, but the Canada 10¢ special delivery stamp, which was added in Austria to pay for special delivery in Canada. 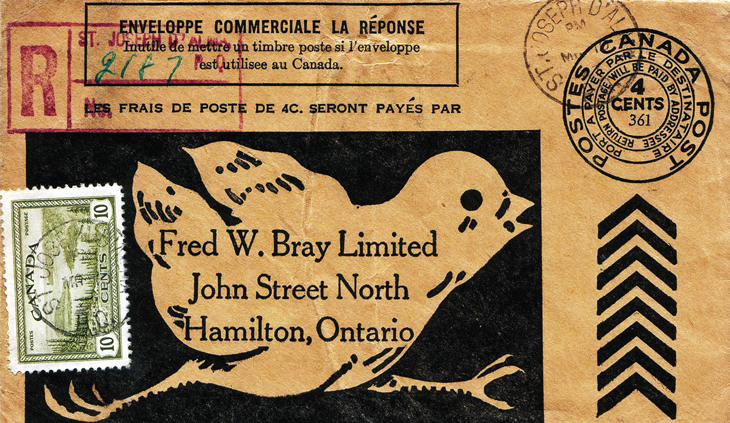 A poultry farmer in a town north of Quebec City added a 10¢ Peace stamp to pay registration on this 4¢ business reply envelope to a mail-order merchant of chicks in Hamilton, Ontario. His order made the 681-mile trip in two days. 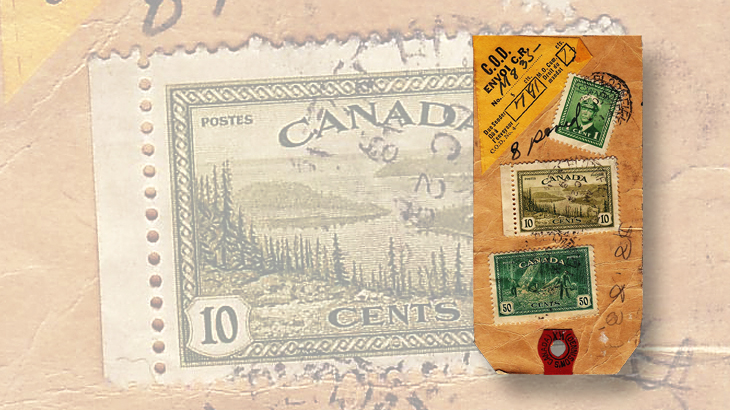 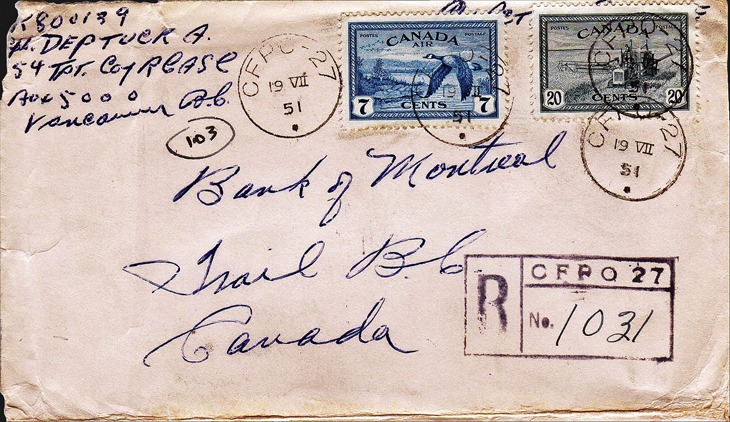 Because his letter was urgent, but Canadian troops in Korea were entitled only to free surface mail, a corporal at Canadian Forces Post Office 27 paid 7¢ airmail and the 20¢ registration fee with Peace stamps to expedite delivery to his bank in British Co 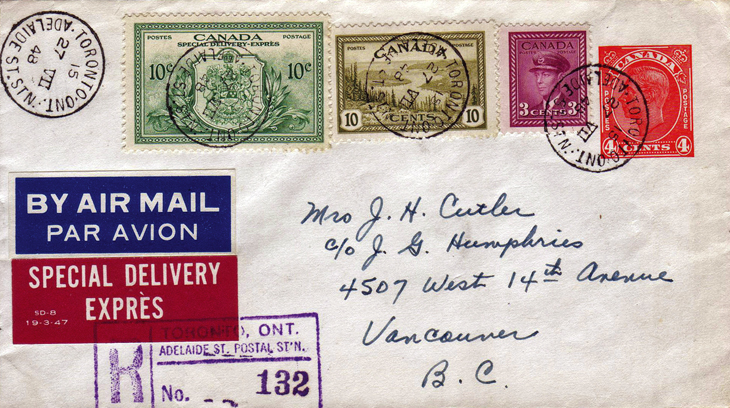 Stamps and mail of the post-World War II era are an abiding interest because even issues you don’t collect can help you learn what to look for and where to focus.

That’s why I enjoyed the handbook The Rates and Postal History of Canada’s Peace Issue 1946-1952 by H.M. (Mike) Street of Ancaster, Ontario, published in 2015 by the British North America Philatelic Society.

For those who imagine that important postal history ended when steamboats stopped running, Street’s 272-page study is an entertaining eye-opener.

The author generously shared with me important details of many of these postal history items.

Having spent three decades attentively building this collection, Street had many pertinent insights to share, as witness the cover to China shown nearby.

These new stamps took over from the high-denomination 1942-43 stamps, marking Canada’s role in supplying tools and talent to the fight against fascism (Scott 258-262).

However, the frugal Canadian post office kept the earlier war-themed stamps on sale alongside the new Peace stamps until old stocks were exhausted.

The No. 10-size registered airmail cover from Toronto, Ontario, to a War Relief Fund in Shanghai shows stamps of the two issues side by side: a $1 Canadian Destroyer (Scott 262) and 50¢ Munitions Factory (261) next to a vertical pair of the 20¢ Combine (271).

But Street knew something much more important about this cover. After the Peace stamps were issued, domestic and international airmail rates then in effect would change Nov. 1, 1946. Correct uses of the new stamps in that short period — what Street calls “the first 46 days” — would be few, and this Oct. 10 cover is one of them. It is the only Peace issue cover he has found paying the special airmail rate to China of 60¢ per ¼ ounce or portion thereof.

The registration fee paid by the 10¢ Peace stamp (Scott 269) is an unusual addition to a prepaid cover sent from St. Joseph d’Alma, Quebec, but, as Street puts it, “the sender wanted to be absolutely sure the order got to Bray” and a fresh order of live chicks would be promptly dispatched.

Another domestic commercial usage is represented by the stamped side of the 1948 c.o.d. parcel tag seen nearby.

As recorded on the address side, it was mailed by F. McAusland & Sons, ”Manufacturers of YARN AND BLANKETS” in Bloomfield, Prince Edward Island, to fulfill a $7.91 order from a man in Beaver Bank, Nova Scotia.

“Since the C.O.D. fee for an article of that value was 15¢, the remaining 46¢ postage paid for a package weighing exactly 8 lbs,” writes Street in the handbook.

Street also stressed a less obvious point, stating “that the C.O.D. fee for this item was prepaid — normally the recipient paid it. The ‘/’ in the fee box indicates this.” The fee box is located in the right corner of the triangular c.o.d. label.

Chicks and blankets are all well and good, but what about real history? There is that aplenty as well, including what Street regards as one of his greatest covers.

This cover caught my eye for the unusual mixed franking of a Canada 10¢ Peace special delivery stamp (Scott E11) and three of Austria’s 1948-58 Costume pictorials (Scott 527, 554).

What’s unusual about this May 2, 1951, registered cover, Street informed me, is not the mixed franking, but that the Canada 10¢ stamp, which was likely supplied by the Canadian correspondent, was added in Austria to pay for special delivery in Canada, because at the time there was no special delivery agreement between the two countries.

The 10¢ special delivery stamp was canceled in Canada and received a “MONT. & TOR. R.P.O. / 1” transit postmark on westbound train 5 after it left the Montreal Air Mail Facility May 5. The cover arrived in Cobourg, Ontario, that same day, having traveled 4,125 miles in four days.

History also figures prominently in this 1951 airmail cover with the registration handstamp of the Canadian Armed Forces Post Office (CFPO 27) in Yongson, Korea, shown courtesy of Dean Mario and the late Steven Luciuk.

The corporal with the 54th Transportation Company of the Royal Canadian Army Service Corps who sent it was eligible for free carriage of surface mail only, but felt this letter to his Bank of Montreal branch back in Trail, British Columbia, was worth the extra 7¢ for airmail (Scott C9) and 20¢ for registration (271).

There are 486 images in Street’s handbook, and I looked at them all.

My personal favorite, and one that I think sums up the era, the issue and the optimism of postwar Canada, is the rather wrinkly relic shown here.

On this June 1, 1948, cover, the three high denominations of the Peace pictorials, including two $1 Train Ferry stamps (Scott 273), paid the correct 18-times airmail postage of $2.70 to send a sample of 4¼ ounces to 4½ ounces of seeds from United Farmers Co-Op headquarters in Toronto to wholesale seed merchants in Thun, Switzerland. One of the stamps is even a 20¢ Combine (271).

The cover is a beauty to those with eyes to see it, and the creases from its cargo only attest to its authenticity.

I asked Street what it was about the Peace stamps that had drawn him to them. He told me that they were issued four months after he was born, which gave him a natural interest in the issue.

More important, however, as a “new postal historian looking for a 20th-century subject that had not yet been done,” he judged them to be a promising field ripe for discovery.

I also asked him a hypothetical question: if the 2016 Mike Street could make a phone call back to Mike Street of the 1990s, what would he have told the man setting out to build the collection that became this book? His answer was short and on point: “You won’t find if you don’t look — and don’t be too picky.”

The Rates and Postal History of Canada’s Peace Issue 1946-1952 can be ordered from the BNAPS bookstore, operated by Sparks Auctions in Ottawa, Canada.

BNAPS members receive a 40 percent discount off the retail prices, which are shown in Canadian dollars.

If you’d like a closer look at these attractive Canada stamps and the images from which they were adapted, visit the page about this issue on the Postal History Corner blog of the late “philcovex.”