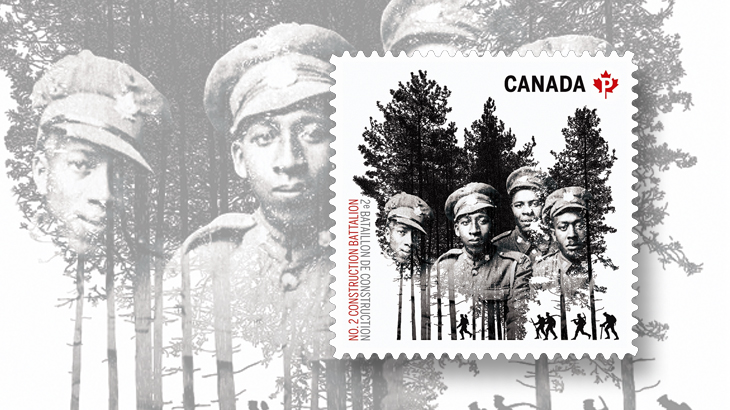 Issued Feb. 1, this Canada Black History Month stamp recalls the only black all-volunteer unit in the history of the Canadian Army, the No. 2 Construction Battalion of World War I. 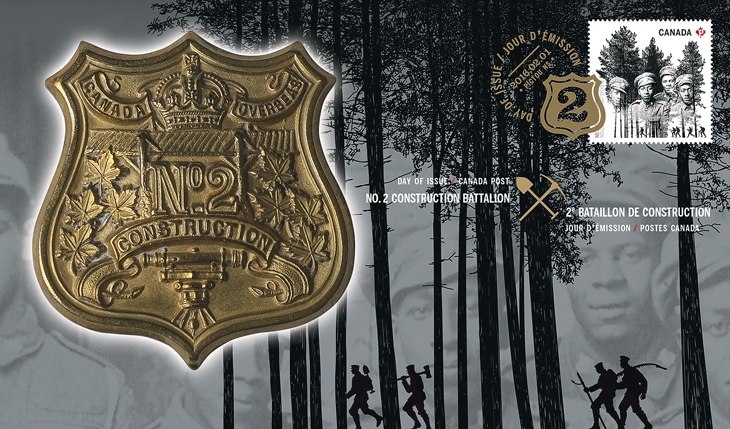 The brass cap badge of the No. 2 Construction Battalion is featured prominently in both the cachet and the gold Pictou, Nova Scotia, cancellation on this Canada Post first-day cover for the stamp.
Previous
Next

The latest stamp in Canada Post’s Black History Month series, which began in 2009, salutes the No. 2 Construction Battalion, formed 100 years ago in 1916.

When their country went to war, they stepped forward to do the same. But before they could battle the Germans in World War I, the elements, the 60-hour weeks of dangerous, exhausting labor, these black Canadians would first have to confront and vanquish prejudice at home.

They persisted, prevailed and won the right to serve overseas, with hundreds joining a new, predominantly black unit.

These were the men of Canada’s No. 2 Construction Battalion. As the battalion marks its centennial year, Canada Post honors its troops and their achievements with a Black History Month commemorative, a “P” permanent domestic letter-rate stamp with a face value of 85¢, issued Feb. 1.

The stamp superimposes original archival photographs of unit members over a backdrop of tall conifers. Members of a forestry crew, shown in silhouette at the bottom of the design, carry their tools to work.

The men felled trees in a mountainous region of France, then milled the timber into lumber that supported trench walls, built encampments, and repaired vital railway lines and roads to supply the Western front.

Living and working conditions were harsh. Their sleeping quarters were separate from those of white soldiers, as was their hospital wing, but they shared mealtime with white comrades. While most members of the battalion never saw combat, some died from pneumonia or other diseases that were endemic, and suffered job-related injuries.

“The battalion’s creation is a story of persistence in the face of adversity,” says Judy Foote, Minister of Public Services and Procurements responsible for Canada Post. “They helped to pave the way for later generations of black men and women to enjoy equal status in our army, navy and air force.”

When WWI broke out in 1914, Canadian recruiting offices were flooded with men eager to serve. But black Canadians who tried to enlist needed permission from the local regiment’s commanding officer, which was rarely granted.

By 1916, Canada had been at war for two years and faced a manpower shortage. Black Canadians had continued to pressure the government to be allowed to serve. In response, the No. 2 Construction Battalion was formed to recruit blacks from across Canada.

Hundreds joined, primarily from Nova Scotia, but also many others from Ontario, New Brunswick, Western Canada and Quebec, as well as more than 160 recruits from the United States.

The battalion distinguished itself as one of 101 Canadian Forestry units, with a total strength of 31,447, at work in France and Great Britain by war’s end.

By September 1917, a mill at La Joux near the Swiss frontier, where the battalion worked, set a record producing “160,494 feet board measure in nineteen hours’ running time,” a mark their regional commander stated “cannot be obtained by any of the older firms in the Ottawa Valley, under the best civilian organization,” according to Canadian Expeditionary Force, 1914-1919: Official History of the Canadian Army in the First World War, by G.W.L. Nicholson, published in 1962.

All of the battalion’s officers, including the colonel who commanded the unit, were white, except one: the Rev. William White.

A son of former slaves from Virginia, White was a distinguished graduate of Acadia University and an influential pastor who spoke out against segregation. As unit chaplain, he was given the rank of honorary captain, making him one of the army’s very few black officers in WWI.

Some battalion members later transferred, joining the estimated 2,000 black Canadians who took part in combat. One of them, Sgt. Seymour Tyler of New Brunswick, fought and was wounded at Vimy Ridge, but returned to fight again at Passchendaele.

In 1939, when the British Empire entered World War II, Sergeant Tyler again volunteered. But in that war, he was one of several thousand blacks in the Canadian Army who fought shoulder to shoulder with men of every race.

The stamp was illustrated by Dennis Budgen using a photograph from the Black Cultural Centre for Nova Scotia, and was designed by Lara Minja of Lime Design of Vancouver, British Columbia.

The booklet cover and Canada Post official first-day cover display an enlargement of the unit’s cap badge, depicting a crown, maple leaves, and a surveyor’s transit.

The official FDC will be canceled in Pictou, Nova Scotia, site of the battalion’s first headquarters.