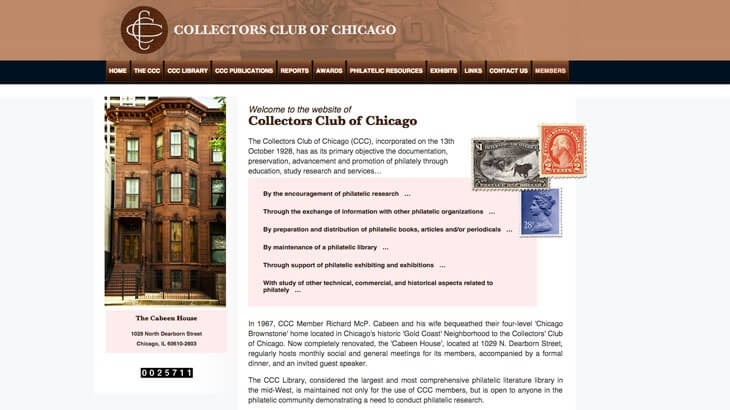 The Collectors Club of Chicago has launched a new website, giving both dealers and collectors alike a wealth of digital information and images.

The Collectors Club of Chicago (CCC) announced this week that it has launched an official website for a collectors of all ages and experience levels.

CollectorsClubChicago.org, which was constructed by volunteer members of the club, took just under three years to complete.

The website provides all sorts of philatelic information useful to both collectors and dealers: basic information related to the CCC, specialized handbooks, Salm Foundation reports featuring technical research on philatelic products, awards, and a philatelic encyclopedia.

There's plenty to look at and learn.

"The fact that there are no chimneys on the 2013 Gingerbread House Christmas stamps (Scott 4817-4820) provided a starting point for several readers entering the December cartoon caption contest featuring the Gingerbread House stamp with the red door (4817)."

“The Royal Philatelic Society of Canada has approved a new and permanent national-level exhibition, Canpex, to be held in southern Ontario in the fall.”

Read all the pertinent information about this new show.