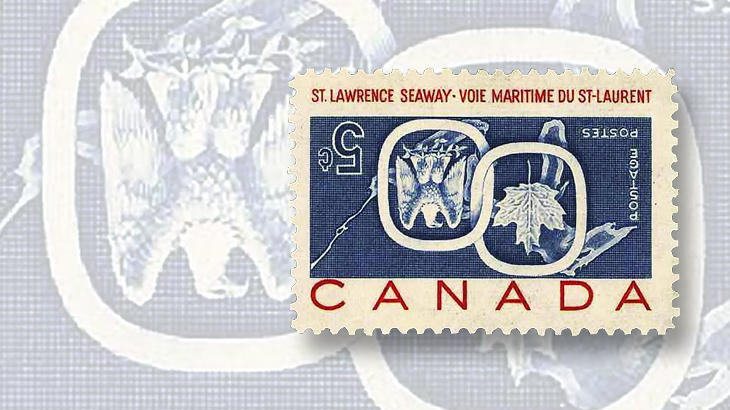 A never-hinged mint Canada 1959 5¢ St. Lawrence Seaway stamp with inverted center will be offered during the Eastern Auctions sale. 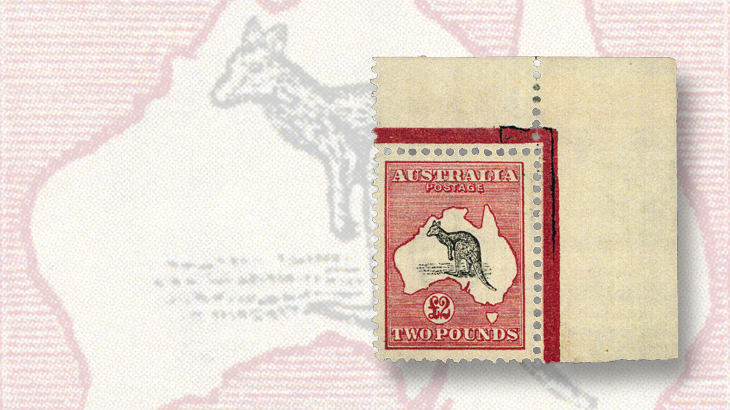 A corner margin single of Australia’s 1913 £2 black and rose Kangaroo and Map first watermark stamp with never-hinged, full original gum. The stamp will be offered during the Eastern Auctions auction to be conducted Feb. 19-20 in Halifax, Nova Scotia, Can
Previous
Next

On Feb. 19 and 20, Eastern Auctions will offer a worldwide sale with classic used British Commonwealth, British North America and Canada stamps and postal history (including Western Canadian postal history), and specialized Australia, with key values of the Kangaroo issue featuring rare varieties. Collectors also will find a substantial number of large lots and collections offered in this sale.

The public auction will take place at the Lord Nelson Hotel and Suites, 1515 S. Park St., in Halifax, Nova Scotia, Canada, with bidding also available by other methods including telephone, fax, e-mail and mail. Lots from this auction will be posted and illustrated on the firm’s website.

The auction includes dozens of lots with the popular Kangaroo and Map issue of Australia, running the gamut of watermark varieties in particular.

Among the rarities on offer is a used 1917 £1 chestnut and bright blue third watermark with the sideways watermark error showing the crown points to the left, as seen from the back of the stamp (a variety of Scott 56).

Eastern cites the 2013 Brusden White handbook, which states “about twelve examples with the sideways watermark have been reported — all used,” with one unused £1 stamp perforated OS also existing.

“The stamp offered here is, no doubt, in well-above average condition for this great rarity,” Eastern notes in the lot description.

Eastern also is offering three examples of the 1913 £2 black and rose Kangaroo and Map stamp with first watermark (Scott 15).

A dramatic mint corner margin single has full original never-hinged gum on the stamp and hinge marks on the sheet margin, which has minor perf separation. The stamp is listed with the Scott catalog value of $16,000 (in U.S. dollars).

The second example is a single with large part original gum and a Scott catalog value of $8,500. Third is a postmarked stamp with a very neat Melbourne CTO (canceled to order) April 1913 presentation cancel, listed with the Scott value of $3,750 for a used stamp.

Collectors hoping to fill other vacancies in their Kangaroo and Map collections will find a wide range of stamps to admire in this specialized grouping.

The auction also offers a strong selection of Canadian and British North America stamps and covers, from early classics to Elizabethan modern errors and varieties, including a never-hinged mint example of the 1959 5¢ St. Lawrence Seaway commemorative error with inverted center (Scott 387a).