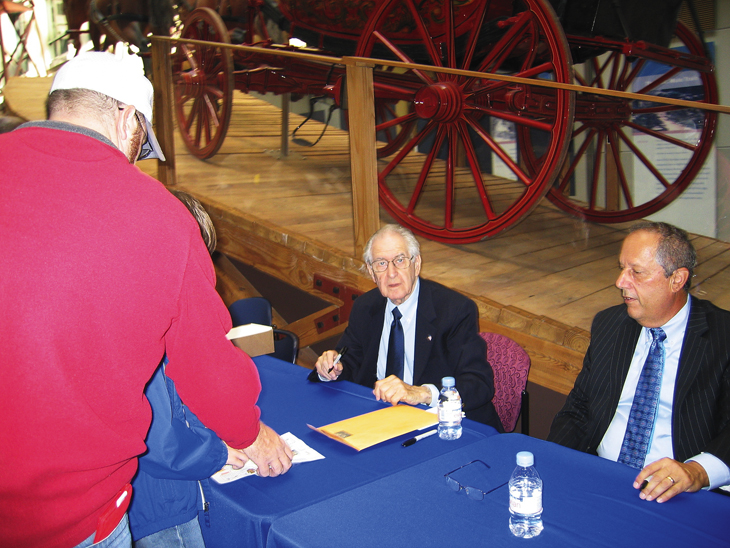 Howard Koslow (center), one of the United States Postal Service’s most prolific stamp artists and painter of its 30 classic Lighthouses stamps, died Jan. 25 at his home in Toms River, N.J. Pictured at right is Allen Kane, director of the National Postal Museum in Washington, D.C., where this photo was taken in 2013.

Howard Koslow, one of the United States Postal Service’s most prolific stamp artists and painter of its 30 classic Lighthouse stamps, died Jan. 25 at his home in Toms River, N.J.

He was 91 and had been in failing health for the past two years.

Of all the stamps he created, Mr. Koslow acknowledged that the Lighthouse stamps were the ones most people remembered — and liked.

After his first set of five Lighthouse stamps, which were issued in 1990, proved popular, postal officials had him create five more sets of the stamps showing lighthouses of the Great Lakes, the Southeast, the Pacific, the Gulf Coast, and New England.

In between, Mr. Koslow created eight of the 1940s Celebrate the Century stamps in 1999, four of the Jazz/Blues stamps in 1994, stamps for the three branches of the federal government and U.S. Constitution in 1989 and 1990, the Brooklyn Bridge (1983), numerous other commemoratives, plus many postal cards and even an airmail letter sheet with an Eagle design in 1991.

Prolific as Mr. Koslow was for the USPS, he produced even more stamps for the Marshall Islands postal service. Many of those stamps had U.S. themes, often related to World War II and American forces who served in the Pacific.

“Howard was an incredible artist whose work in the world of stamps was admired by millions of fans, particularly fans of our lighthouse series,” she said in a statement.

“He was a humble individual who was loved by everyone whose life he touched. We will truly miss him.”

"I know I will miss his gorgeous Lighthouse stamps as much as I will miss Howard. He was a great guy and so kind to stamp collectors.”

He created paintings for the U.S. Coast Guard and the National Aeronautics and Space Administration.

A lifetime member of the Society of Illustrators, Mr. Koslow will be honored this year as a member of the Wall of Distinction at Brooklyn’s James Madison High School.

Unicover, agent for sales of Marshall Islands stamps, describes his career, noting that he graduated from the Pratt Institute in New York in 1944, where he was awarded an Art League scholarship.

He then served as an apprentice to Jean Carlu, a French poster artist, who had a studio in New York, according to Unicover.

Mr. Koslow later studied at the Cranbrook Academy of Art in Bloomfield Hills, Mich., and the School of Visual Arts in New York City.

In 1991, Mr. Koslow was elected to membership in the Society of American Historical Artists, a group whose mission is the preservation and portrayal of historical art.

Mr. Koslow was proud of his role in the stamp program and enjoyed attending stamp ceremonies, signing autographs for collectors, and creating his own Lighthouse first-day covers as well.

Privately, Mr. Koslow said he was irritated by the Postal Service’s efforts to sell reproductions of some of his Lighthouse stamps to art collectors in the early 2000s without offering artists any of the profits the Postal Service was seeking to collect.

Publicly he remained a booster of the stamp program.

Helen, his wife of 66 years, often traveled with him to first-day ceremonies.

Mr. Koslow is survived by his wife and two daughters, Kathi Meyer (Perry) of San Diego and Amy-Jo Willig (Jeffery) of Melville, N.Y.; a sister, Helen Mandelbaum; and four grandchildren.

A funeral service for Mr. Koslow was held Jan. 28 in Lakewood, N.J., followed by burial in Mount Ararat Cemetery in Farmington, N.Y.