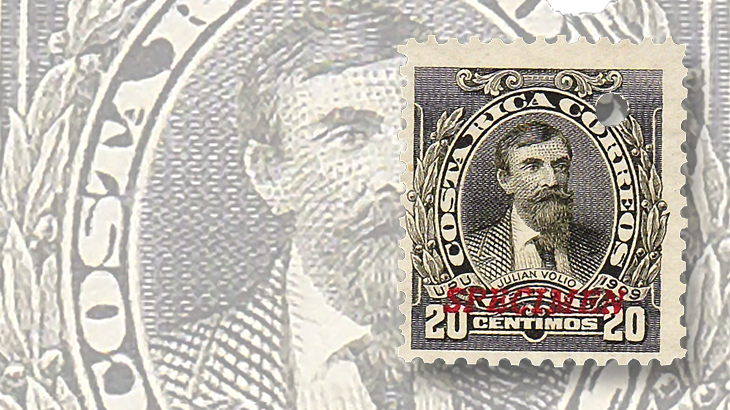 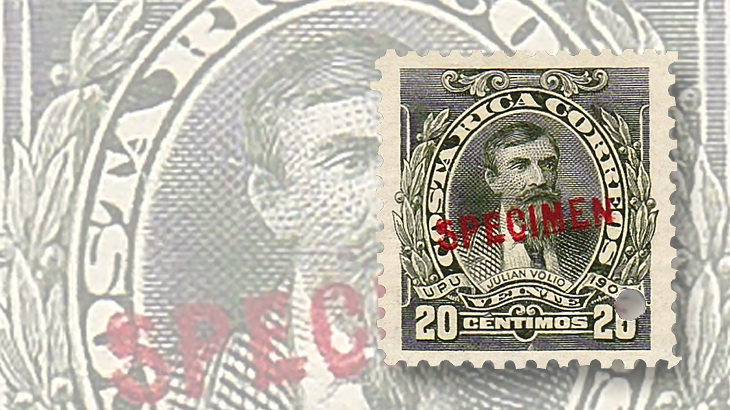 This overprinted 20c specimen stamp is from a later printing than the stamp in the previous illustration. 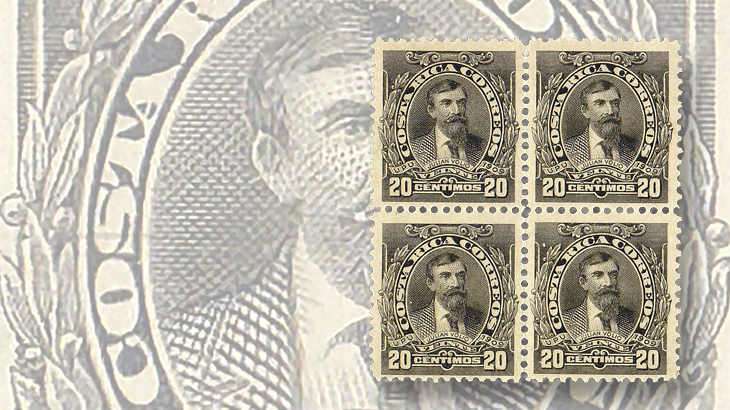 The 20-centimo stamp of Costa Rica’s 1910 Portrait set shows Julian Volio Llorente, who was the country’s secretary of foreign affairs during 1863-68.
Previous
Next

For some reason, the 20-centimo stamp of Costa Rica’s 1910 Portrait issue (Scott 74) strikes a chord with me, and I find it extremely attractive.

It was printed by the American Bank Note Co., as part of a set of eight stamps issued in 1910 (Scott 69-76), even though the stamps themselves say 1909 in the right-hand ribbon beneath the bust.

The eight stamps are portraits of various military heroes and political figures of Costa Rica. The olive-green 20c stamp shows Julian Volio Llorente, who was Costa Rica’s secretary of foreign affairs from 1863-68.

At the time the stamps were issued, the 20c denomination paid the domestic registration fee, which remained unchanged from 1901 to 1917.

A single 20c stamp also might be used to pay double the foreign rate, such as a letter weighing 15 to 30 grams.

In that period, “foreign” included the United States, because the treaty including preferred rates to countries of the Postal Union of the Americas and Spain was not signed until 1923.

Centered at the top and bottom of the sheet are the words “American Bank Note Company.”

The order number is in the upper-right corner, above the 10th stamp in the sheet.

Some stamps from each printing were overprinted “specimen,” as shown here in two illustrations.

Stamps of the 1910 issue were demonetized June 1, 1924, and the remainders sold at public auction.

Of the 20c denomination, 126,933 were sold but not defaced with parallel lines, as previous issues had been. As a result, mint examples of the 1910 series are quite common, with the exception of the 25c stamp (Scott 65), which was not remaindered.

This accounts for the value of the 25c being much greater ($17 unused) than the other stamps in the set, which are mostly valued at less than $1 unused in the 2016 Scott Classic Specialized Catalogue of Stamps and Covers 1840-1940.

Costa Rica is a great country to collect. The specialized Costa Rica Postal Catalogue edited by Hector Mena is among the best for any Latin American country.

Most of the other specialized literature for Costa Rica, along with the Mena catalog, is available on disk from Socorico, the Society for Costa Rica Collectors.