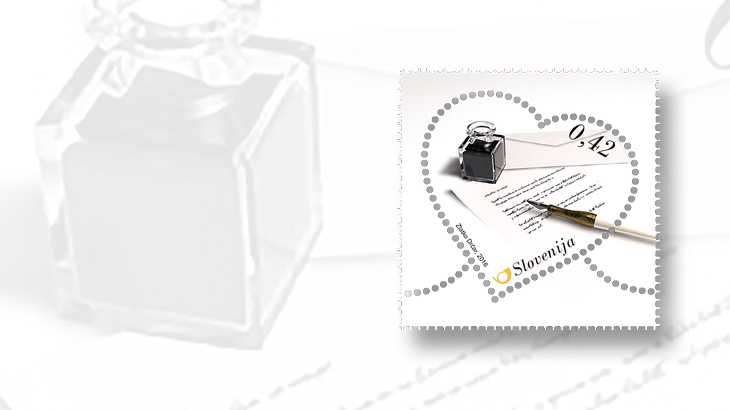 The theme of Slovenia’s 2016 Greetings stamp for Valentine’s Day is the writing of love letters. 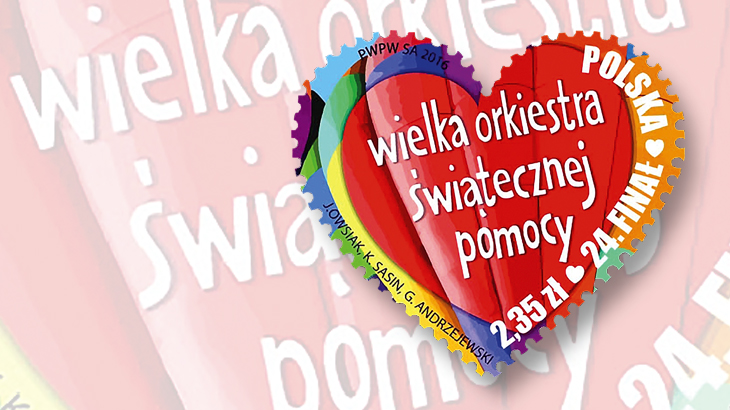 A heart-shaped stamp from Poland commemorates the grande finale of the Great Orchestra of Christmas charity. 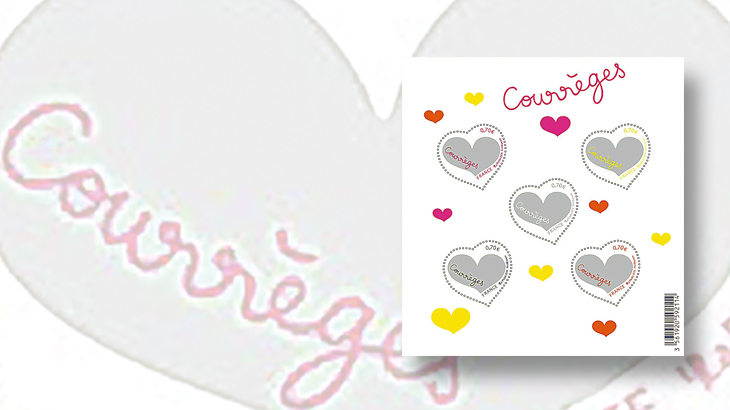 The fashion design house of Courreges created the design for this year’s heart-shaped Love stamps from France. The pane of five includes stamps with the inscriptions in different colors. 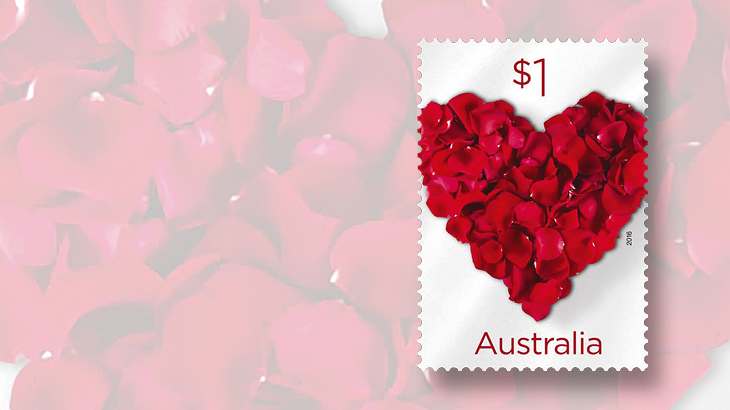 A heart of rose petals is pictured on this $1 stamp in Australia’s new Love to Celebrate issue.
Previous
Next

As has been their tradition for several years, Slovenia and France issued heart-shaped stamps this year for Valentine's Day mail. While not heart-shaped, other recent stamps also picture hearts.

The €0.42 stamp from Slovenia promotes the writing of love letters. The design inside the heart shows a love letter, an ink well and a pen.

In announcing this Greetings stamp, Posta Slovenije asked that in this modern day of computers and the Internet, “Do you still know how to write a love letter?”

Slovenia began its annual series of heart-shaped Love stamps in 2003. The 2016 stamp was issued Jan. 29.

La Poste, the French post office, has been issuing heart-shaped stamps for Valentine’s Day since 1999, and many of these have been designed by well-known people in the fashion industry.

Each design shows a heart within a heart and includes the name Courreges. The issue includes €0.70 and €1.40 stamps produced in separate sheets of 30, and a pane of five €0.70 stamps.

The stamps were printed with a special iridescent and fluorescent ink, according to La Poste.

A stamp picturing red rose petals forming a heart is part of Australia Post’s Jan. 25 Love to Celebrate issue. This set of Greeting stamps includes nine stamps denominated $1 to pay the new domestic letter rate and one $2 stamp. The heart stamp is denominated $1.

Australia Post said, “Love to Celebrate features stamps relevant to diverse occasions, such as an engagement, anniversary, a wedding, birth, birthday or graduation. The designs are also suitable for postage relating to more general occasions or for sending a simple message of affection.”

A heart-shaped commemorative stamp from Poland honors a charity event, the 24th grand finale of the Great Orchestra of Christmas Charity.

The nationwide fund-raiser was held Jan. 10 to buy medical equipment for pediatric wards and to provide medical care for seniors, according to the charity. The theme was “Aim High!” and, in keeping with this theme, the 2.35-zloty stamp depicts part of a colorful hot air balloon.

The stamp was issued Jan. 5 in panes of five with a sky blue background.

Naturally, Ireland’s stamp marking the 50th anniversary of the Irish Heart Association features a heart in its design. Ireland’s An Post describes the design as showing “an image of a heart over a cardiograph of a regular heartbeat.”

This €0.70 commemorative was issued Jan. 28, followed on Feb. 11 by a heart stamp in Ireland’s Love and Marriage series, previously called the Wedding series. According to An Post, this nondenominated stamp represents hearts forming a chain.