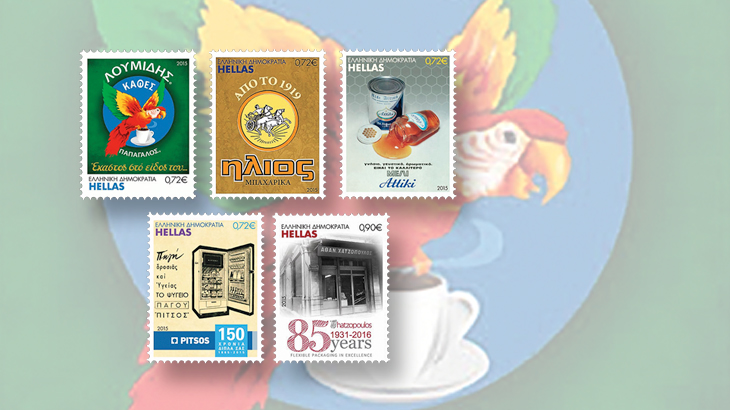 I've always been drawn to postage stamps that depict items of ephemera that were once used to advertise or display a product or service. This is especially true of some of the older products where the bright colors and stylized art result in some really visually appealing items. Think along the lines of some recent United States emissions such as the Vintage Seed Packet stamps of 2013 or the Summer Harvest issues of 2015 and you'll see what I mean. Of course, some of these posters were more utilitarian than art, but they still provide neat little snippets of history.

Given all of that, I was delighted to discover that on Dec. 14, 2015, E?TA - Hellenic Post issued a set of five commemorative stamps each of which features a representation of the original advertising poster art of a long-established business in Greece, household names, if you will.

Adapted by frequent Greek stamp designer Anthoula Lygka and named “Corporate Signs, Logos & Products That Made History,” this handsome set was printed in multicolor using offset lithography and comes as a pane of 25. Produced by Giesecke & Devrient Matsoukis S.A., there was a print run of 700,000 per stamp.

Four of stamps bear a denomination of €0.72. These stamps feature the following products:

Loumidis Papagalos. Early in the 20th century, brothers Antony, Nikos and Jason moved from their small town of Karistos to Piraeus where with borrowed money they started producing the oldest and most popular (even to this day) Greek coffee. The company merged with Nestle in 1987 and started its expansion into the U.S. market in 1992 by opening a store in Flushing, Queens, N.Y.

Attiki Honey. Taking after their father who had opened up a small shop in 1896, brothers Alexandros and Panagiotis Pittas opened up theirhoney store in Athens in 1928. Made using flower, herb, forest and thyme honey, their product was originally marketed as Ymittos Attiki Honey since all of their thyme honey came from Mount Hymettus. Over time as more sources of thyme honey started being used, the name was changed to simply Attiki Honey. Today the company remains family-owned.

Pitsos Home Appliances. Founded in Athens in 1865 by the Pitsos family, this company started out manufacturing only small appliances. With business booming, in 1959, it expanded to include larger appliances, such as refrigerators. Today the company has 1,400 employees and commands 40 percent of the appliance market share in Greece, and has exports running to Europe and the Middle East. After a recent rebranding, the business is now called BSH Ikiakes Syskeves (BSH Home Appliances).

Sun Spices. Founded by the Diamantopolou family in the port city of Piraeus in 1919, this company imports and exports spices,  herbs, teas and bird foods.

Hatzopoulos Flexible Packaging is featured on the €0,90. Starting out as a paper bag manufacturer in 1931, this company added flexible packaging, such as potato chip bags, to its repertoire in 1981. It exports its products to both Europe and Africa.