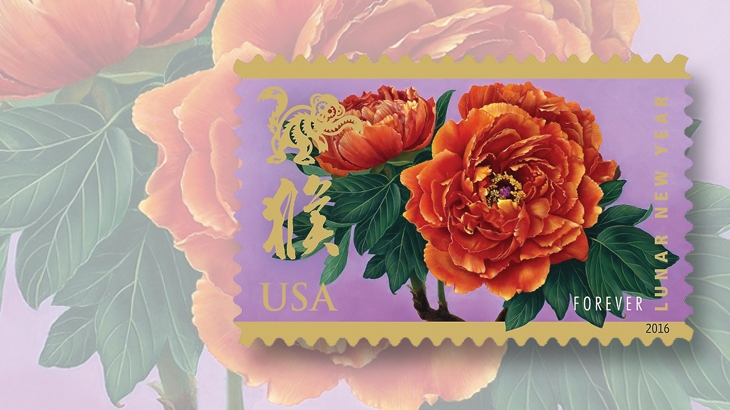 The nondenominated (49¢) Year of the Monkey stamp has a Feb. 5 issue date. It will be celebrated during a first-day ceremony in Jamaica, N.Y.

The United States Postal Service will welcome in the Year of the Monkey with a new nondenominated (49¢) forever stamp that features red-orange peonies from artist Kam Mak, and a small cut-paper image of a monkey based on a previously used design by artist Clarence Lee.

The Lunar New Year stamp for the Year of the Monkey has an issue date of Feb. 5.

The self-adhesive stamps are offered in panes of 12 with decorative selvage that includes each of the 12 animals of the Chinese zodiac as small cut-paper illustrations. An enlargement of the monkey figure, partially obscured, peeks out above the block of 12 stamps on the pane.

The peony depicted on the stamp is the national flower of China, and can be used to symbolize prosperity, beauty, and peace — appropriate sentiments for the approach of a new year. It also appears as a decoration on drums played during holiday festivities, according to the Postal Service.

The small gold monkey adorns the upper left corner of the stamp illustration.

“As the most important holiday of the year for many Asian communities around the world, the Lunar New Year is celebrated primarily by people of Chinese, Korean, Vietnamese, Tibetan, and Mongolian heritage,” the Postal Service reports. “Images associated with some of these widespread customs are depicted in the Celebrating Lunar New Year series.”

The current Lunar New Year stamp series is the second for the Postal Service. The first, featuring larger examples of the cut-paper animal illustrations by Clarence Lee against a variety of colorful backgrounds, began in 1992 and ended in 2006.

Each stamp in the second series (since 2008) shows a celebratory design emblematic of Asian culture, but also includes a smaller image of the cut-paper animal figures that featured prominently in the first series.

The painting shows two peony blossoms in shades of orange-red, with green leaves and a glimpse of the stems from which they have grown.

The illustration has a background of pale purple.

Clarence Lee’s cut-paper monkey is positioned at upper left in gold, and gold ink is also used for the grass-style calligraphy by Lau Bun, which shows the Chinese character for “monkey”; for the “USA” imprint at lower left; and for the text “Lunar New Year” reading up the right edge.

Gold trim frames the design at top and bottom.

Ethel Kessler served as the U.S. Postal Service art director for the Year of the Monkey stamp, and as designer and typographer.

Technical details and first-day postmark information for the Year of the Monkey forever stamp are provided below.

Nondenominated (49¢) Year of the Monkey stamp

Standard ordering instructions apply. Collectors requesting first-day cancels are encouraged to purchase their own stamps and affix them to envelopes. The first-day cover envelopes should be addressed for return (a removable label may be used), and mailed in a larger envelope addressed to Lunar New Year: Year of the Monkey Stamp, Jamaica MPO, 8840 164th St., Jamaica, NY 11432-9998.

Requests for first-day cancels must be postmarked by April 5.

The Postal Service’s uncacheted first-day cover for the Year of the Monkey stamp is item 586516 at 93¢. USPS order numbers for stamps and FDCs also appear in Linn’s 2016 U.S. Stamp Program.