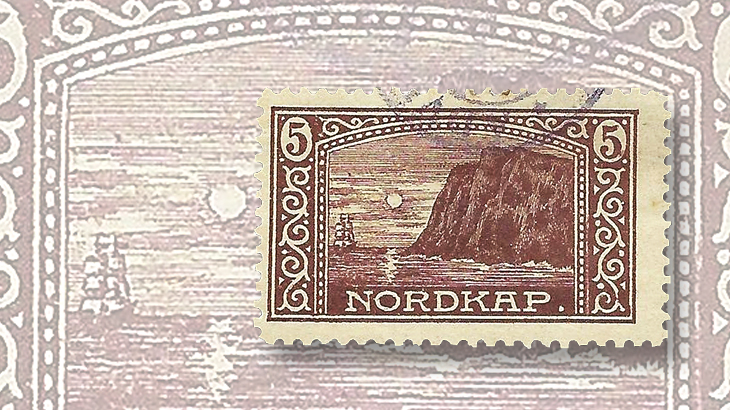 This early 20th century stamplike label depicting Norway’s spectacular North Cape was sold to tourists to add to their postcards. 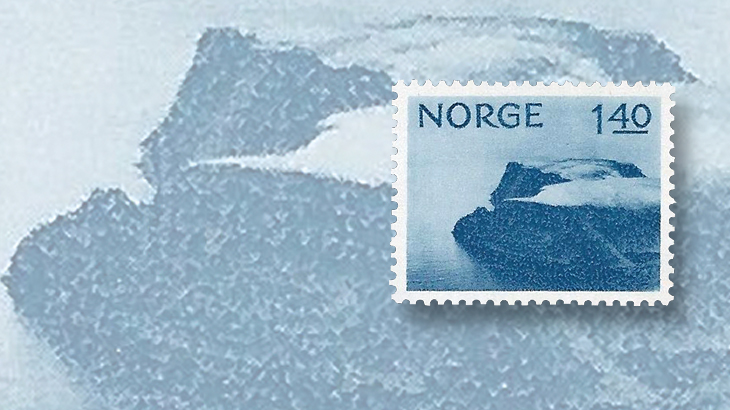 A definitive stamp in 1974 portrayed the North Cape in a somewhat less dramatic way than the earlier postal issues had done. 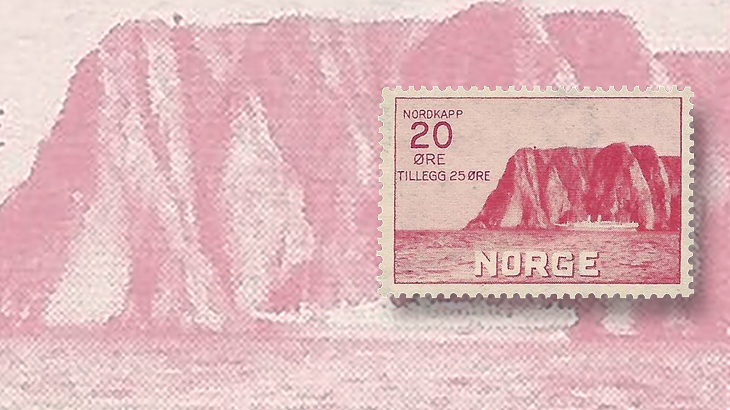 In 1930, raising funds to promote tourism, Norway issued a set of three semipostal stamps showing the North Cape. The design was repeated on four later sets of semipostals.
Previous
Next

The northernmost point of the European mainland is the Nordkapp — the North Cape — in Norway. I have never had the pleasure of visiting this most interesting place, but my wife has.

On a cruise along Norway’s Atlantic coastline, her ship docked at Honningsvag, and the passengers were then taken by bus to the North Cape.

Due north is the Arctic Sea. My wife tells me that they visited the cape on a day with windy, wet and misty weather. This is apparently the kind of weather visitors can expect.

The North Cape has attracted thousands of tourists each year for more than a century. Many stop by on their way to Spitsbergen, even farther north in the Arctic Sea.

More than 100 years ago, special labels featuring a view of the North Cape were sold for 5 ore each to tourists. They were intended to dress up picture postcards mailed to friends and relatives back home.

The perforated stamplike label inscribed “Nordkap” pictured here exists in brown and green and possibly in other colors as well.

It shows a view of the cape with a sailing ship nearby. Over the years there have been several other types of North Cape labels, many of which are quite uncommon today, but there also have been postage stamps featuring this attraction.

In 1930, Norway wanted to promote its tourist industry. Of course, funds were needed for advertising and other related activities, and it was decided to release a set of three semipostal stamps, Norway’s first such issues (Scott B1-B3).

The 25o surcharge on each stamp would go to the Landslaget for Reiselivet i Norge, an organization that had been established to encourage tourism in the country.

The three different denominations of the 1930 semipostals picture the impressive Cape along with a cruise ship. Only 100,000 stamps were issued of the top 30o+25o denomination, making the set of three quite valuable today and especially so in mint never-hinged condition.

The ship shown on the stamps is the SS Bergensfjord, which was built in England in 1913 for the Norwegian American Line. It could carry as many as 1,200 passengers and was frequently used for cruises to the North Cape. After an eventful history, the ship was scrapped in 1959.

In 1938, it was decided to issue two more semipostal stamps (Scott B9-B10) of the same design and surcharge (25o) as the 1930 issues, and with the same purpose of promoting the tourist industry.

This time, however, the stamps were produced in a smaller size. Like their 1930 predecessors, the two 1938 stamps are printed on watermarked paper showing a post horn.

Germany invaded Norway in 1940, and the Norwegian government had to go into exile in London, where it continued the struggle for national liberation. During the war years the country had a puppet government headed by Vidkun Quisling, who appears on several 1942 semipostal issues (Scott B25-B27).

Strangely enough, the post office continued to promote the Norwegian tourist industry, with a new set of three semipostal stamps released in 1943 (Scott B28-B30). The design remains exactly the same as that of the previous issue, and the surcharge amount is still 25o. The main difference is that the stamps are printed on unwatermarked paper. There were 420,000 sets printed, and it is the least expensive of the eventual five North Cape sets.

One really wonders about the extent of tourism and holiday activities during the war years. The German soldiers on duty in Norway certainly preferred to return home, given the opportunity. Many Norwegians had fled to Sweden where some received military training.

Following the liberation on May 17, 1945, the development of the tourism industry was probably not terribly high on the agenda, but when things returned to normal in the early 1950s, Norway once again wanted to promote the country as a visitors’ destination. Thus, there were further North Cape semipostals in 1953 (Scott B54-B56) and 1957 (B59-B61). They are of identical design to the previous issues but with new colors, denominations and surcharges.

All in all, there are 14 different North Cape stamps. The funds collected apparently did lead to growth in the tourist industry. The Atlantic coastline has numerous beautiful fjords, and many tourists enjoy a cruise going all the way up to the Cape, rewarded along the way with fantastic views of spectacular landscapes.

In 1974, a 1.40-krone definitive stamp (Scott 632) was issued depicting the North Cape, showing it from a slightly different and less impressive angle than did the tourist issues, which used a ship to help show the scale of the cliffs.

Today, semipostal stamps are no longer needed to help finance publicity campaigns for tourism in Norway. However, the five sets of North Cape stamps show us one of the most interesting natural wonders in all of Europe, despite its frequently rather unpleasant weather.