Phonograph Records first-day covers: Bhutan to Canada, via the Bahamas 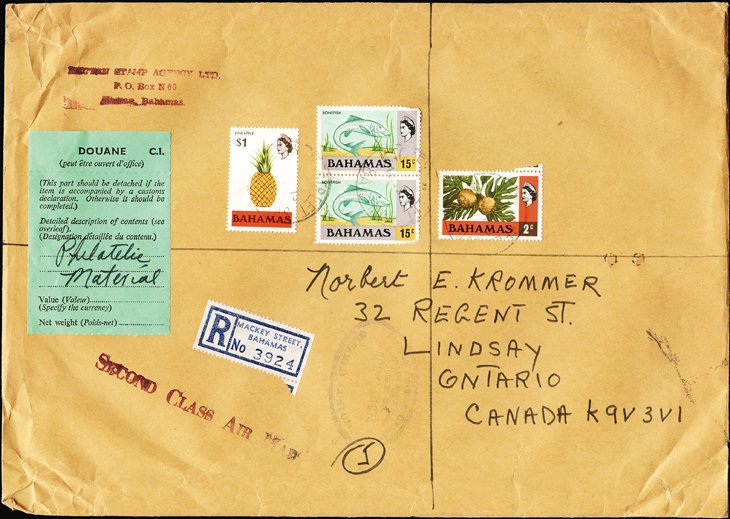 Norbert Krommer's Phonograph Records stamps and FDCs arrived in this large registered envelope. Note that the $1.32 franking matches the required postage and registration fee listed on the invoice pictured in the third illustration. 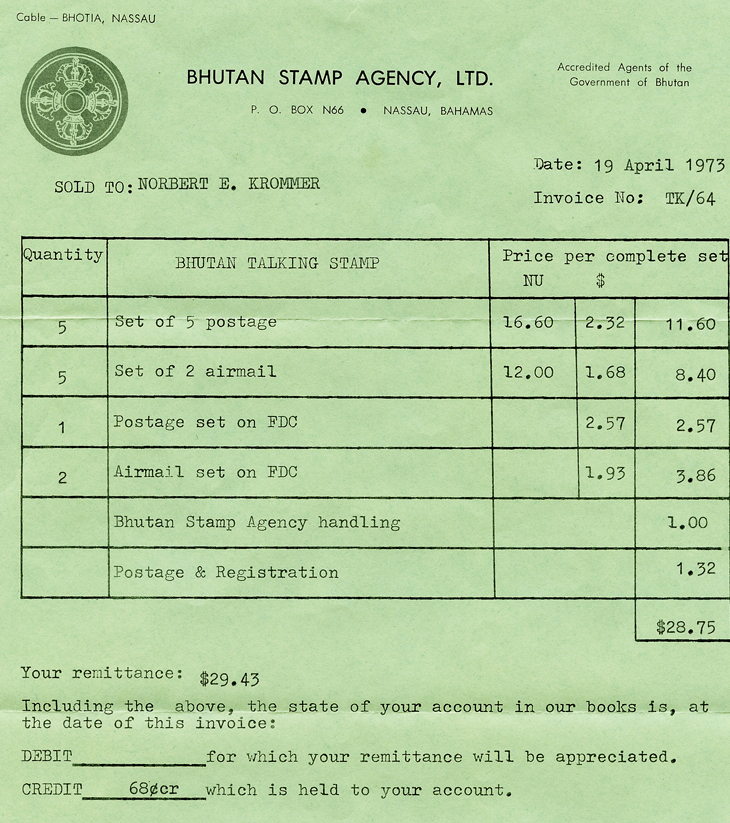 Collector Norbert Krommer of Ontario, Canada, ordered both Phonograph Records stamps and FDCs from the Bhutan Stamp Agency, as can be seen on this invoice dated April 19, 1973, four days after the stamps were issued.

This envelope from the Bhutan Stamp Agency in Nassau, Bahamas, contained the new-issue brochure for the Phonograph Records stamps that was mailed to Krommer. 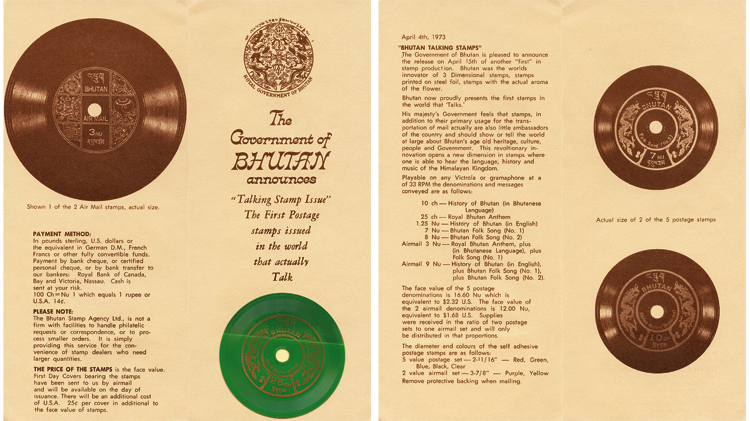 Front, left, and back of the April 4, 1973, new-issue brochure from the government of Bhutan announcing the playable Phonograph Records stamps: “The First Postage stamps issued in the world that actually Talk.” 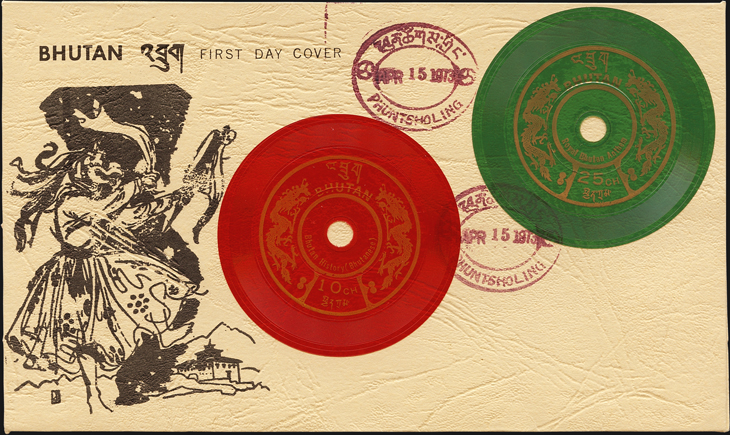 Two of the seven Bhutan Phonograph Records stamps issued April 15, 1973, are affixed to this first-day cover that a collector ordered from the Bhutan Stamp Agency in Nassau, Bahamas, shortly after the stamps were issued.
Previous
Next

My story (Linn’s, Nov. 30, 2015) about a registered cover from Qatar bearing a set of Sheik Ahmad gold-foil stamps that sold for more than $1,100 on eBay precipitated some fascinating feedback from readers.

One of the more engrossing of these replies came from Canada dealer and specialist John Jamieson of Saskatoon Stamp Centre in Saskatoon, Saskatchewan.

“I found your article on the Qatar gold foil circular stamps sold on e-bay rather interesting and thought I might have a bit of a follow-up for you,” Jamieson told me via email Dec. 15.

Jamieson then proceeded to relate a story about a trio of first-day covers for the quirky, plastic 1973 Phonograph Records stamps from Bhutan (Scott 152-152F) that can be played on a stereo turntable.

Pictured nearby is one of the covers, franked with a 10-chetrum yellow on red and a 25ch gold on green Phonograph Record stamp.

A handstamped cachet at left features a person in native attire dancing. A mountain scene, appropriate to Bhutan’s remote location in the Himalayas between Tibet and China, is in the background.

“BHUTAN” and “FIRST DAY COVER” are printed above the cachet

Each of the other two FDCs is similar to this one, except for the frankings: a 3-ngultrum silver on purple and 9nu black on yellow on one, and a 1.25nu silver on blue, 7nu silver on black, and 8nu red on white on the other.

A larger envelope, without the illustrated cachet, was used to accommodate the larger diameter of the 3nu and 9nu Phonograph Record airmail stamps.

Because the third FDC bears the 1.25nu, 7nu, and 8nu stamps, only the mountain scene was used for the cachet.

“Way back in 1973, when we still had a retail store, we used to bring in new issues for clients,” Jamieson explained to me.

“When the Bhutan Phonograph Records came out, I thought they were too weird and decided to bring in a couple of sets to see how they sold. I even recall playing them on my record player at the time. They did sell, and I pretty much forgot about them for the next 40 years.”

Jamieson was attending a stamp show where he noticed some Phonograph Records stamps and FDCs in the stock of fellow Canadian dealer Bill Longley.

The items were “on consignment from a client [of Longley’s] and nostalgia got the best of me,” Jamieson recalled. “I bought the two mint sets he had” and the trio of FDCs, he said.

At this point, one of the ironclad rules of our great hobby came into play: The stories behind the stamps can be as fascinating as the stamps themselves.

Illustrated nearby are both sides of the brochure, which carries an April 4, 1973, dateline — 11 days before the April 15 official first day.

In mildly broken English, the brochure describes the stamps, indicates that they are “playable on any Victrola or gramaphone,” and provides instructions for ordering stamps and first-day covers.

Four of the seven issued stamps are shown actual size on the brochure: 25ch and 3nu on the front, and 7nu and 10ch on the back.

At the time the Phonograph Records stamps were issued, the authorized agent for Bhutan’s stamps was based in Nassau, Bahamas.

As can be seen on the April 19, 1973, invoice pictured nearby, one Norbert Krommer of Lindsay, Ontario, Canada, purchased five sets each of the Phonograph Records postage (Scott 152-152B, 152D, 152E) and airmail (152C and 152F) stamps, one set of FDCs franked with the postage stamps (three stamps on one cover, two on the other), and two sets of FDCs franked with the airmail stamps (two stamps per cover).

Shown at top in the final illustration is the envelope containing the brochure that was sent to Krommer from the Bhutan Stamp Agency.

At bottom is the large registered envelope used to mail Krommer’s order to him.

Jamieson priced the FDC set and accompanying items at almost four times the Scott catalog value for the complete set of seven stamps.

Even so, he sold the intact lot within a few months.

Had the brochure, invoice and associated postal history not been part of the lot, the FDCs likely would have sold for less than Jamieson initially asked.

Because collectors treasure the stories behind the stamps and covers. And the better the story, the more a collector is likely to pay.

This explains why the United States 1918 24¢ Jenny Invert airmail error attracts such widespread attention — and spirited bidding — every time one comes across the auction block.

Not only is it an eye-catching error, but the story of its discovery is still fresh and exciting 97 years later.

Jamieson told me that he counts his encounter with these exotic Bhutan FDCs as an enjoyable one.

“From time to time such weird and wonderful stuff really does sell,” he said.

Are you curious to learn more about the origins of Bhutan’s ground-breaking stamps, including those printed on steel, silk cloth, heat-molded plastic, and compact discs?

My From The Scott Editors column in the June 2009 Scott Stamp Monthly, titled “From 3-D to CD: innovative firsts found among Bhutanese stamps,” is a good place to start.