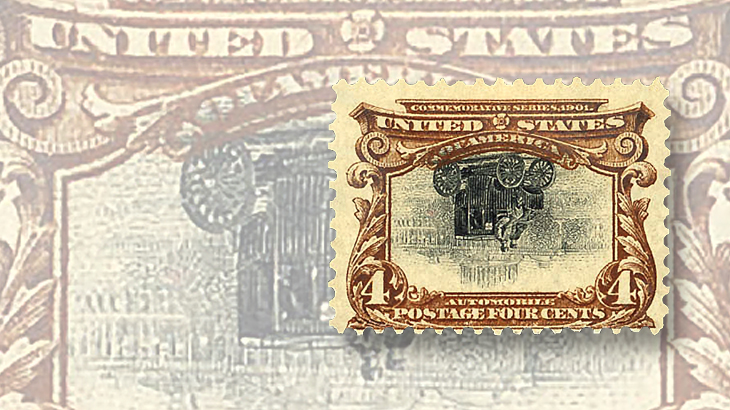 This example of the 4¢ Pan-American Exposition stamp with inverted black center will be offered during the Feb. 2-4 Kelleher Flagship auction. 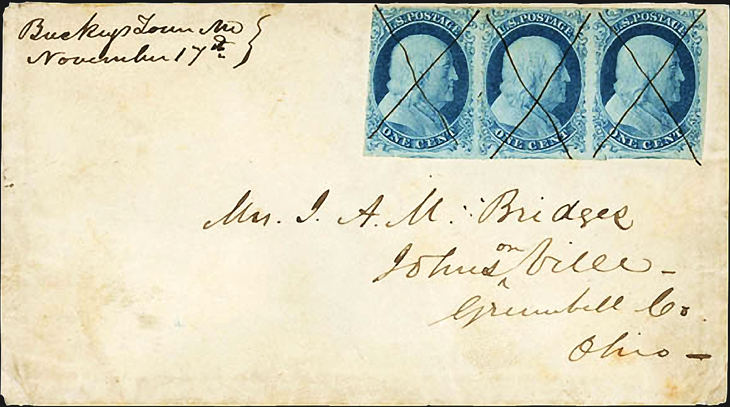 An 1851 cover franked with a strip of three of the United States 1¢ blue Benjamin Franklin stamps, including a Type I from position 7R1E, is offered at auction by Daniel F. Kelleher during the Feb. 2-4 Flagship sale.
Previous
Next

The Feb. 2-4 Flagship sale by Daniel F. Kelleher Auctions will feature stamps and postal history of the United States, including revenues and U.S. possessions, plus British Commonwealth and other countries worldwide.

More than 1,600 lots will be offered in the auction taking place at the Kelleher offices in Danbury, Conn.

A highlight of this sale is an 1851 cover from Buckeystown, Md., addressed to Johnsonville, Ohio, and franked with a strip of three of the 1851 1¢ blue Benjamin Franklin stamp.

These stamps have substantial value, but the position 7R1E stamp (Scott 5) is particularly treasured as a rarity for the near-completeness of the design ornaments that are incomplete on stamps from all other positions on the plates used to print the 1¢ blue Franklin.

The strip is described by Kelleher as “large margins virtually all around with adjacent stamps visible at bottom, clearly displaying the key bottom ornaments; cut slightly in at top left with position 8 having a light crease; a beautiful plate 1 early printing in bright shade, tied by neat manuscript ‘X’ cancellations … minor soiling on reverse, Very Fine and very rare, signed Stanley B. Ashbrook 1953, and with 2006 P.F. [Philatelic Foundation] certificate.”

The cover is pictured and listed as 5-COV-83 in the Wagshal Census of 7R1E compiled by Jerome S. Wagshal and edited by Mary Wagshal and Scott R. Trepel.

A specific listing for Scott 5 on cover in a strip of three with one stamp Type I appears in the Scott Specialized Catalogue of United States Stamps and Covers with a value of $210,000. The value is given in italics, indicating an item that trades infrequently and which can be difficult to value accurately. Kelleher offers an estimate for this cover of $40,000 to $60,000, with an opening bid of $20,000.

This auction also features a block of 10 of the never-issued 1998 nondenominated postcard-rate Hat stamp, often called the “Yellow Hat” because of the yellow background behind the image of Uncle Sam’s hat.

More than 75 countries and colonies are represented in this auction with material from the British Commonwealth, Europe, Asia, Middle East, Africa and Latin America.