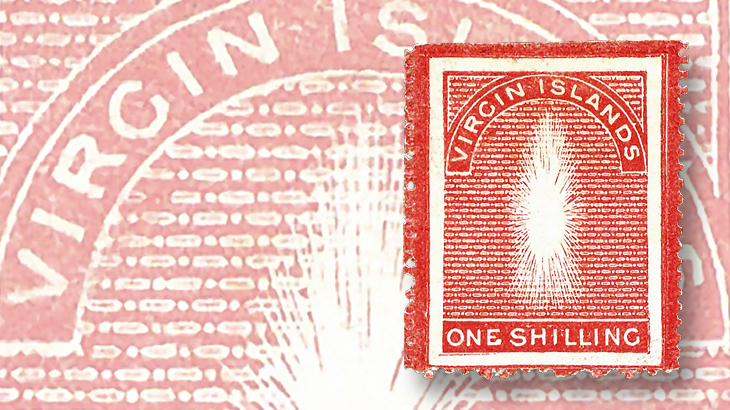 A seldom-seen 1867 “Missing Virgin” error of the British Virgin Islands appeared in David Feldman’s Dec. 11, 2015, auction. The only known example with original gum, this stamp sold for $170,000.

Topping off the highlights in David Feldman’s Dec. 11, 2015, auction in Geneva was a “Missing Virgin,” a spectacular and seldom-seen error from among the early issues of the British Virgin Islands.

The Caribbean colony’s 1867 1s stamp consists of a rose-colored background with a figure of St. Ursula printed in the center in black.

Columbus sailed past the islands in 1893, naming them for the legendary St. Ursula.

Some small number of the stamps missing the central figure (Scott 8c) reached the public.

According to the sale catalog, the last time a Missing Virgin — “one of the world’s most iconic and sought-after stamps” — was offered at auction was in 2011, as part of the famous Chartwell collection.

All known examples have scissor-cut perforations with the perfs trimmed off on one or two sides.

In the plus column, the example in the Feldman sale does boast of having original gum, the only such example known. It fetched $170,000.