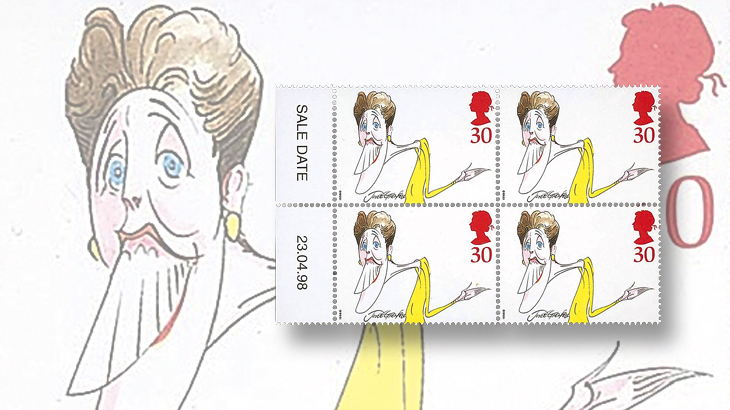 A margin block of four 1998 Joyce Grenfell stamps with a 30-penny denomination from Great Britain will be auctioned by Spink in London. The stamps were normally issued with a 37p face value. 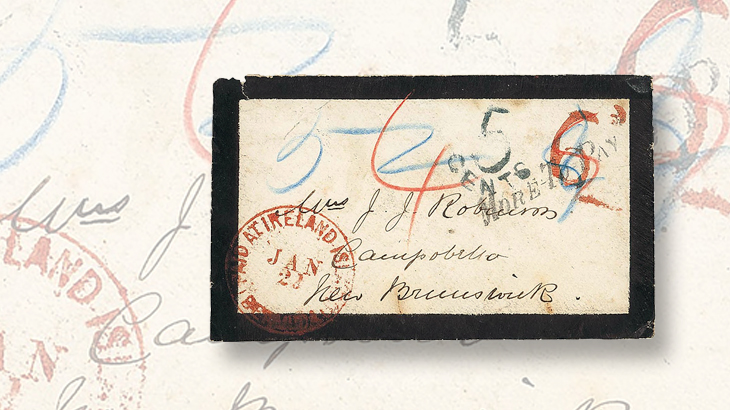 An 1863 stampless cover sent from Bermuda to New Brunswick is struck by a circular datestamp from Ireland Island not previously known. The cover is being offered in the Jan. 27-28 Spink Philatelic Collector’s Series auction in London, England.
Previous
Next

The Spink auction firm will present its Philatelic Collector’s Series sale Jan. 27-28 at its offices in London.

The sale will offer 1,365 lots of stamps, proofs, postal history, and worldwide philatelic material from Great Britain, the British Commonwealth, and elsewhere.

One intriguing item up for sale is an 1863 mourning cover mailed from Ireland Island, Bermuda, to Campobello Island, New Brunswick, struck with a previously unrecorded “American-style” circular datestamp from Jan. 22 reading “Paid at Ireland Island Bermuda.”

The cover is also marked by a locally made “6d” handstamp marking at upper right, identified in the auction lot description as the latest recorded date of use.

Both of these markings are struck in red, and the 6d handstamp has been crossed through with a blue crayon, replaced with a manuscript “4” in red crayon.

Ireland Island, in the northwest of the Bermuda chain, was established as a Royal Navy base in the 18th century.

The Spink auction listing carefully identifies the markings found on both the front and reverse of the small cover.

The envelope was illustrated and described by Denis Littlewort in the September 1995 Bermuda Post, journal of the Bermuda Collectors Society, shortly after its discovery in a trove of correspondence.

Five years later, with research conducted by Geoffrey Osborn, Littlewort reported in the September 2000 Bermuda Post the discovery of contemporaneous published details showing the 1863 datestamp “was obtained from an American source by the Bermuda postmaster general for use at Ireland Island.”

No other example of this handstamp has been reported.

Copies of Osborn’s correspondence and articles about the cover are included in the lot.

The auction has much to offer the collector of classic British Commonwealth material, and an extensive selection of Great Britain, including early postal history in the form of Mulready envelopes and other items.

The Penny Black, Great Britain’s (and the world’s) first postage stamp, is represented with a number of postally used singles, and an additional selection of the 1d stamps franking covers to a variety of destinations.

More recent British material includes a substantial number of errors and other production varieties from the Queen Elizabeth II era.

An unissued stamp is among the oddities presented: specifically, a block of four of the 1998 Joyce Grenfell stamp that appeared normally in post offices with a 37-penny denomination (Scott 1811), but which exists in this block as a 30p, a variety prepared but never issued, and of which roughly 30 are known.

The block comes with attached marginal imprint at left reading “SALE DATE” on the upper selvage and “23.04.98” on the lower.

Details about Spink’s Philatelic Collector’s Series sale are available on the firm’s website. Bids can be placed online, and the catalog can be examined in multiple available formats.