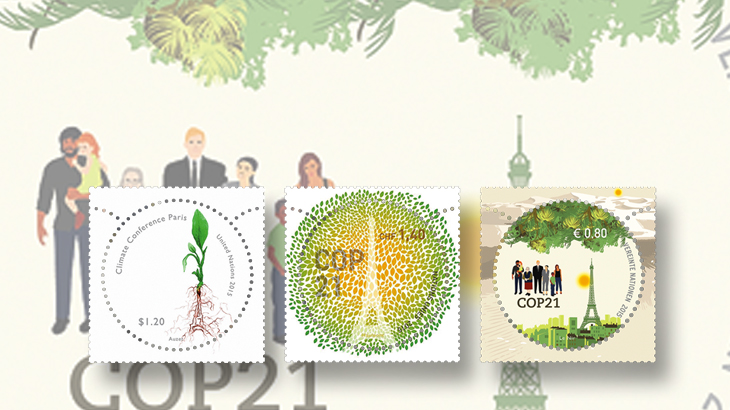 The United Nations stamps for the 2015 Climate Change Conference in France reproduce the winning designs in a contest organized by France’s La Poste.

The UNPA issued three stamps Nov. 24 to honor the conference, and La Poste issued a single stamp on that date. All of the stamps are round, representing the planet Earth.

The French stamp and the $1.20 U.N. stamp for use from the post office at U.N. headquarters in New York City reproduce the winning design in a contest organized by La Poste for students of the Higher School of Art and Design of Saint-Etienne (ESADSE) in France.

The UNPA reports: “Five entries were selected as the finalists, and after the public and a jury voted, the winning stamp design was unveiled by President Francois Hollande of France.”

This winning design was created by Noemie Auzet, age 22 and a fourth-year student at the school. The symbolic design depicts a plant with roots in the shape of the Eiffel Tower.

This Parisian landmark also figures prominently in the two other U.N. stamps. These designs were created by Charles Haumont and Nolwenn Le Nir, also finalists in the design contest.

Haumont’s design of the Eiffel Tower surrounded by golden and green leaves is shown on the 1.40-franc stamp for use from the U.N. post office at the Palais des Nations in Geneva, Switzerland.

The design by Le Nir depicts the tower in a sunny city landscaper. Also shown are a group of people and trees. The illustration is reproduced on the 0.80 stamp for use from the U.N. post office at the Vienna International Center in Vienna, Austria.

The single stamp from France is nondenominated. The inscription “Monde 20g” indicates that it pays the international rate for letters weighing up to 20 grams.

La Poste’s printing office printed the French stamp and the three U.N. stamps. Each was produced separately in sheets of 30.

The stamp from France may be ordered from La Poste or from the French Stamp Agency in North America, operated by Unicover Corp.