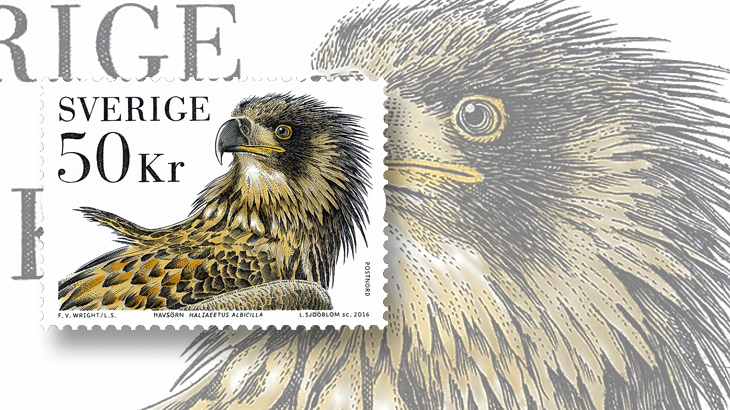 This high-denomination coil stamp featuring a white-tailed eagle was designed and engraved by Lars Sjooblom. The design is based on an 1861 painting by Ferdinand von Wright. 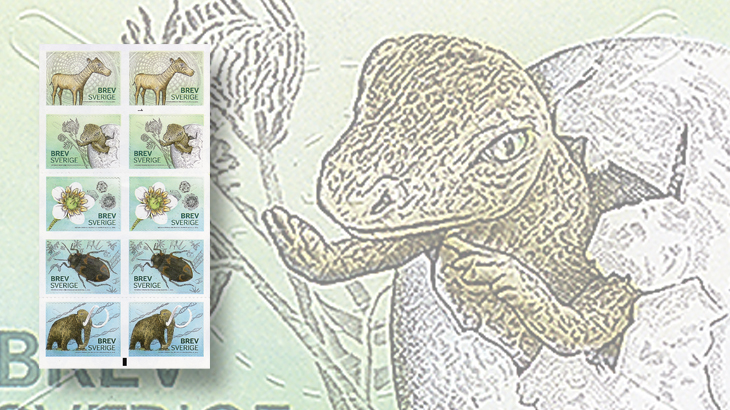 A booklet of 10 stamps with five designs marks the 100th anniversary of the Swedish Museum of Natural History at its current location. 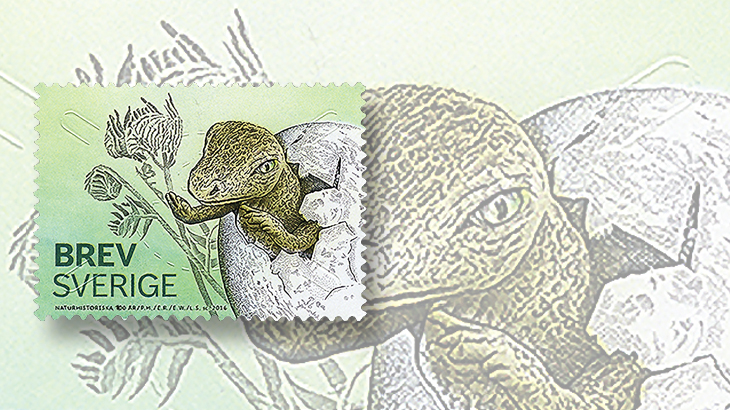 This booklet stamp from Sweden pictures a newly hatched maiasaura, based on a reconstruction of a fossil found in the United States. 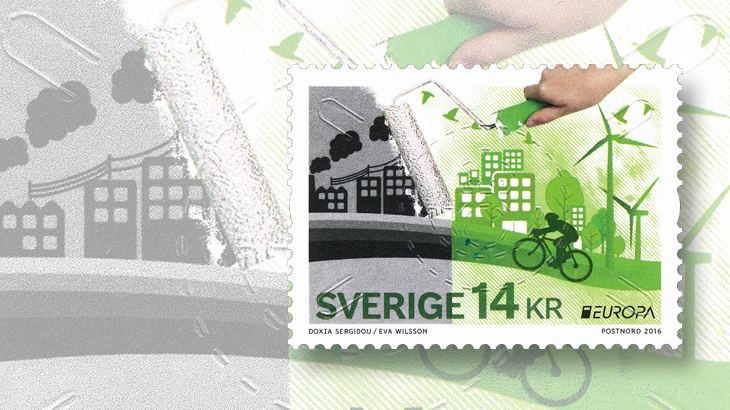 A new stamp from Sweden has a United States connection. It shows a reconstruction of a 75-million-year-old fossil found in the United States, according to the press release from Postnord, the company established in 2009 through the merger of Sweden’s Posten AB  and Post Danmark.

The stamp is one of five in a booklet of 10 commemorating 100 years of the Swedish Museum of Natural History in its present location at Frescati in northern Stockholm. The building was designed by Swedish architect Axel Anderberg.

The booklet was issued Jan. 14. Released at the same time was a stamp picturing a white-tailed eagle and the Europa “Think Green” stamp.

The Swedish Museum of Natural History stamps are nondenominated. The inscription “brev” on each stamp indicates that it pays the basic domestic letter rate (7 kronor).

The dinosaur stamp is the second in the booklet of 10. It pictures a newly hatched maiasaura in the foreground with a royal fern (Osmunda regalis) in the background. Postnord said that this “plant has more or less remained the same since dinosaurs roamed the Earth.”

The press release did not provide any additional details about where the fossil was found, but maiasaura, which means “good mother lizard” is Montana’s state fossil and found only there.

The first stamp in the booklet pictures the fetus of a quagga (Equus quagga Quagga), an extinct subspecies of the plains zebra. Swedish naturalist Anders Sparrman brought this fetus back from South Africa in 1775. The stamp also pictures the museum’s dome.

Illustrated on the third stamp in the booklet is an 80-million-year-old flower fossil (Silvianthemum suecicum), discovered in Skane, Sweden, and magnified pollen grains from a dandelion, masur birch and amaranth.

The next design depicts a predaceous diving beetle (Hydroporus figuratus) in the foreground and a diatom in the background. This beetle was first described in 1826 by Swedish entomologist Leonard Gyllenhaal.

The final stamp represents the work of Swedish Museum of Natural History researchers in mapping the entire heritage of the mammoth.

The 50kr denomination is to pay the postage on packages. Postnord reports that it is the first in a series of Bird stamps created to meet the needs of online merchandisers. The stamp was printed by a combination of intaglio and offset in coils of 100.

Also issued in coils of 100 was the 14kr Europa stamp for international letters weighing up to 50 grams or domestic letters up to 100 grams.

All of this year’s Europa stamps are to share a common design created by Doxia Sergidou of Cyprus representing the theme “Think Green.”