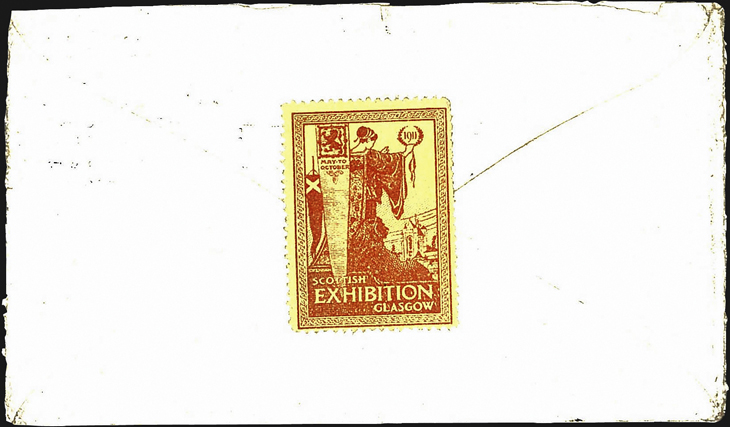 Although the 1911 Glasgow Exhibition labels had no postal validity, one was applied to the back of this envelope as a seal on the flap. 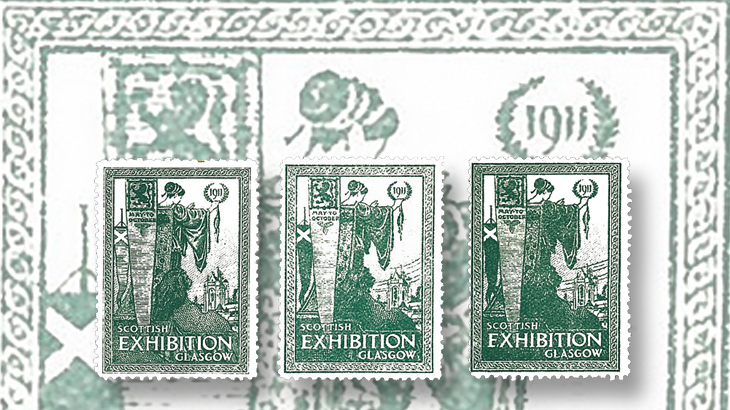 There are varieties in the design of the exhibition label, such as the rendering of the clouds behind the building facade in the lower right corner: no clouds (left), curved lines (center) and straight lines (right). 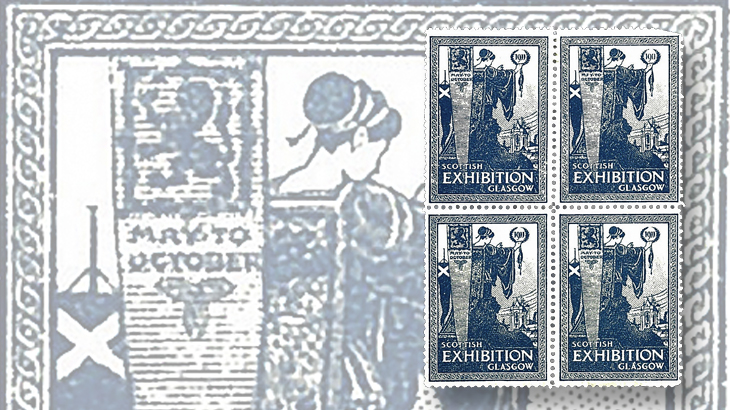 The 1911 Glasgow Exhibition labels can be acquired in multiples, such as this block of four. 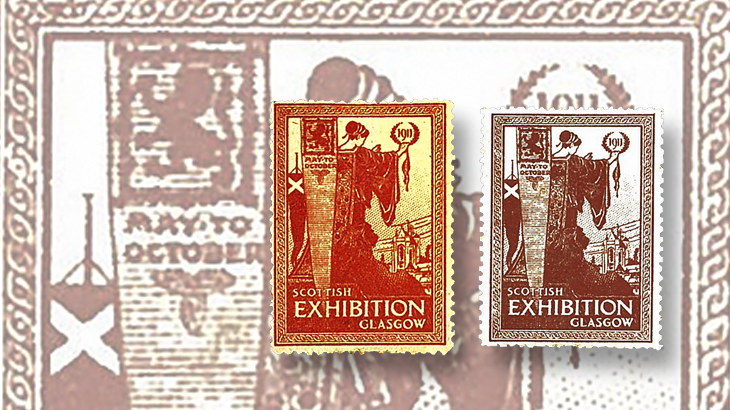 The 1911 Glasgow Exhibition labels exist in five colors. Shown here are orange and mauve. The other colors are black, blue and green. 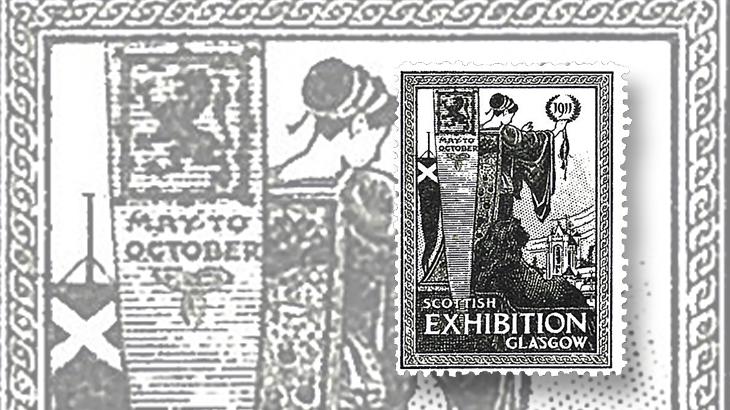 This British cinderella label sent the author of this column on a search of the Internet to explain its origin.
Previous
Next

A friend gave me the label shown nearby. He knew nothing about its origin, and thought I might like to write an article about it.

Because I had never seen it before, I did a Google search on “1911 Glasgow Exhibition.”

Information from various Internet sites told me that in 1911 there was an exhibition held in Glasgow called the Scottish Exhibition of National History, Art and Industry.

One of the primary purposes of the exhibition was to raise funds to endow a chair of Scottish history and literature at Glasgow University.

This exhibition was a Scottish event and not an international one, so its focus was strongly national.

In an effort to find more information, I began to look for the labels in stamp dealers’ sales lists and on eBay.

It took two years for me to gather examples and the information necessary to write this article.

Little information was available about the labels, their origin and use. A few specialists in British cinderellas, that is stamplike labels with no postal purpose, occasionally offered examples for sale.

The label my friend gave to me was black. I discovered that they also were printed in orange, blue, green and a shade of purple called mauve. They are printed on unwatermarked, gummed paper.

I began to acquire examples of all the colors. They were usually available for under $5 each, sometimes in multiples, such as the block of four shown nearby.

I recognized the style of the design as art nouveau, a style of decorative arts popular in Europe between 1890 and 1910. Art nouveau is characterized by natural forms such as flowers and plants and by dependence on curved lines.

Notice the wreath of laurel leaves with dangling ribbon containing the year date that the female figure is holding and the diaphanous flow of her robe’s sleeve.

The woman may be a representation of the Roman goddess Victory symbolizing might, success and achievement. The laurel wreath headpiece is traditionally a symbol of victory. The personification of Victoria may have been a throwback to the then-recent age of Queen Victoria.

Overall, the entire design is strong in Scottish symbolism. The banner to the left bears the saltire, the X-shaped emblem shown on the flag of Scotland.

To the left of the figure’s head is the Scottish lion rampant (standing on hind legs) in a decorative border. The months of the exhibition “May to October” are noted under the lion.

In my search for information about the exhibition on the Internet, I learned that the building outlined in the lower right corner was a graphic rendering of the facade of one of the temporary exhibition halls on the grounds of Kelvingrove Park in Glasgow, the venue of the exhibition.

On close examination of the examples of the labels I managed to purchase over the course of my two-year search, I concluded that there might have been several engraved plates created for the printing of these poster stamps.

In the nearby illustration of three green stamps, note the representation of the clouds over the building facade. There is a version that shows no clouds (left), a version with curved lines (middle), and a third version with straighter lines (right).

For what purpose were the labels produced? Likely for promotion of the exhibition and maybe to serve as mementos of the event.

I was able to acquire the envelope shown nearby. An orange label was applied to the back of it as a kind of seal over the envelope flap. The label had no postal validity and did not receive any postal marking. Its purpose was simply decorative.

The exhibition was considered one of the most successful of its kind at the time. More than 9 million visitors attended. The entire population of Scotland in 1911 was only about 5 million. Also, £15,000 was raised to endow a chair in history and literature at Glasgow University.

Despite successful efforts to acquire numerous examples of this poster label and to find through Internet research information about the 1911 Glasgow Exhibition, I still have some unanswered questions. Who designed the labels? Who printed them? What was the intended meaning of the metaphorical female figure?

If anyone can provide answers to any of these questions, please contact me by email at dapennyblack@aol.com.

If you would like to learn more about poster stamps in general, visit World Poster Stamps created by Charles Kiddle, a well-known British expert on cinderella material.